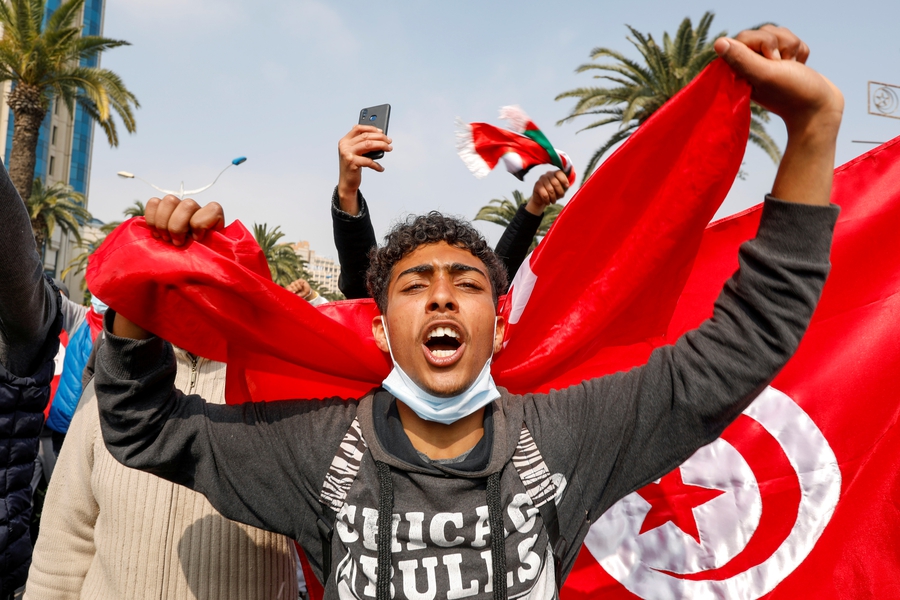 January 2021 marked the ten-year anniversary of the Tunisian Revolution. Yet, prior to the anniversary, the authorities announced a strict four-day lockdown to combat the spread of the coronavirus (COVID-19). However this move by the government was seen as a ‘political tactic’ in an attempt to curb mass protests.

Protests erupted on 14th January 2021. Dire economic conditions were once again among the primary drivers of the protests, which were seen in all cities. Protests were also triggered following a video circulated on social media in which a police officer is seen assaulting a shepherd in the Siliana region. Human rights organisations reported the use of excessive force against protesters. According to a report by Human Rights Watch, one person died as a result of the use of excessive force, which included tear gas, water cannon and physical violence. The organisation called for an “urgent and transparent investigation” into the death of Haykel Rachdi, who died on 18th January 2021 after sustaining a serious head injury from police intervention during a protest.

“Tunisia’s nationwide protests were triggered by legitimate anger and frustration at the dire economic outlook. The government should rein in police who have acted unlawfully and ensure the right to peaceful protest and free expression,” Eric Goldstein, acting Middle East and North Africa director at Human Rights Watch.

The Tunisian Association for Justice and Equality and the Tunisian League for Human Rights (LTDH) had identified at least 1,540 people arrested during the protests, including minors.

Several international and Tunisian human rights groups issued statements and letters regarding these arrests, especially of young protesters. In solidarity with the youth movement FIDH called on the Tunisian government to release all those who were unjustly arrested and to initiate steps that would allow the Tunisian people to meet the aspirations and the objectives of their revolution.

In an open letter written to the President of Tunisia, human rights groups in Tunisia called for the pardon of all young people who were arbitrarily arrested and unjustly condemned.

According to the Tunisian Forum for Economic and Social Rights (FTDES), there has been an increase in protests taking place. In March 2021,1,138 protest actions were registered in comparison to 1,235 demonstrations in February 2021 and 223 in March 2020. In 2020 alone, FTDES recorded 6,500 protests, all of which were motivated by economic, social and environmental concerns.

During the period January to May 2021, the Lebanon Support's mapping of mobilisations by groups of people whose goal is to achieve a common objective in Tunisia indicates that 44 actions took place, with some actions being met with repression from the state.

On 17th March 2021, following the decision of the Appeals Court in Tunis, Human Rights Defender and queer feminist activist Rania Amdouni was released. Amdouni was fined 200 Dinars (approximately 60 Euros). On 4th March 2021 she was sentenced to six months in prison for “violating the general morals”, “insulting a governmental employee”, and “being drunk in public places”, due to her participation in ongoing protests (see peaceful assembly). Weeks prior to her detention, Amdouni had faced intensified harassment online, including death and rape threats.

She had been sentenced to 6 months in prison, following a wave of online harassment & smear campaigns directed against her https://t.co/jrgQTqlTft via @AssociationDamj pic.twitter.com/aRmvpgcwKG

The case of Amdouni forms part of a larger crackdown on the LGBTI+ community in Tunisia. In early March 2021, the Tunisian Association for Justice and Equality (Damj) head Badr Baabou was assaulted and during the same month a plainclothes officer attempted to force his way inside the association’s office without a warrant and interrogated employees about their activities. In addition, during February 2021, Ayub Belarbi, another activist who works with Damj, was forcibly disappeared, physically assaulted, denied the right to speak with a lawyer while in detention and forced to sign a false confession in which he admitted to assaulting a police officer.

In her interview with the Tahrir Institute for Middle East Policy (TIMEP), Asala Mdawkhy, regional coordinator of Damj, said:

“LGBTQI+ Tunisians were highly visible during protests last October against a police protection bill that would have shielded security personnel from accountability for use of force. Again in December and January, members of the LGBTQI+ community joined thousands of other Tunisians in the street to protest police violence and the country’s deteriorating economic situation, which had only been exacerbated by the COVID-19 crisis and related restrictions. By the middle of February, Tunisian authorities had arrested and detained nearly two thousand people. In this environment, LGBTQI+ Tunisians have faced escalated harassment on and offline, violent reprisals, and arrests and prosecution, both in response to their peaceful advocacy as well as solely on the basis of their gender expression and sexual orientation”.

Incidents related to journalists during protests

Journalists have also come under threat during protests, as documented by Human Rights Watch:

Several activists were also detained over expression, as documented by Human Rights Watch:

On 13th April 2021, police forcefully entered the offices of state news agency Tunis Afrique Presse (TAP) to break up a protest staged by journalists against the appointment of the agency’s new director, Kamel Ben Younes, a journalist and government ally. Journalists, who had been protesting since 6th April 2021, argue that the appointment will impact on the independence of the agency. In a statement the Committee to Protect Journalists (CPJ) said:

“The Tunisian government must ensure the independence of the press sector and refrain from using the country’s security forces to enforce contested personnel decisions. Authorities should never have stormed the Tunis Afrique Presse news agency’s headquarters in Tunis, which sets a terrible precedent for police interference in the free press,”- CPJ Middle East and North Africa Senior Researcher Justin Shilad.