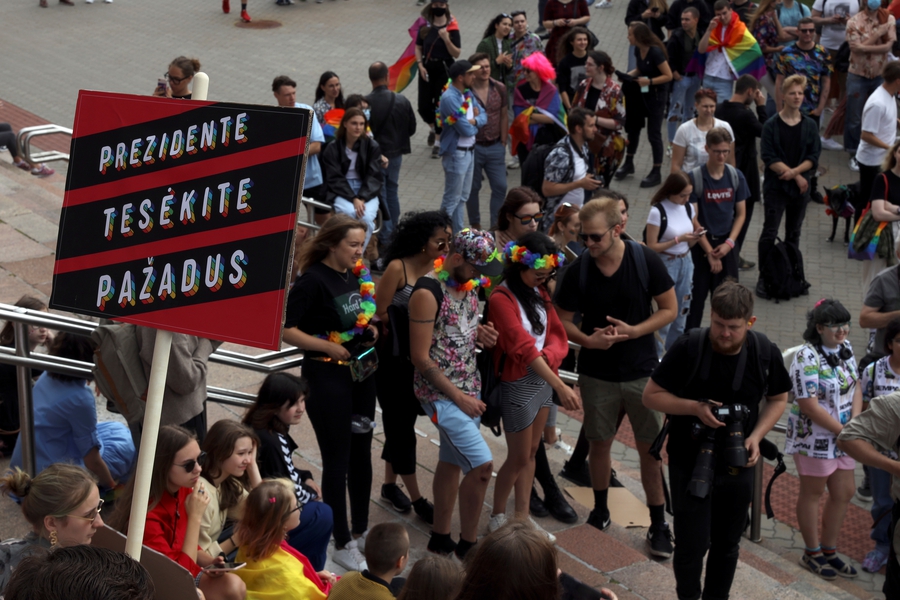 As previously reported on the CIVICUS Monitor, due to the political crisis and mass protests in Belarus, Lithuania has been granting asylum to Belarus citizens and has become home to one of the central figures of Lukashenko’s opposition, Svetlana Tikhanovskaya, who fled Belarus in August 2020 due to safety concerns. In March 2021 the Belarus General Prosecutor’s Office requested the extradition of the opposition leader "to face prosecution for crimes against the governing order, public safety and the state". "We can say only one thing to the Belarusian regime: hell will first have to freeze over before we consider your requests," responded Lithuania’s Foreign Minister Gabrielius Landsbergis.

Debates around the Law on Political Parties

On 27th April 2021, the Lithuanian Parliament voted in favor of the amendment to the Law on Political Parties, which allows citizens of the European Union to found political parties in the country but not to run for Parliament. After the discussions in committees, the Law is expected to return to the Parliament for a plenary debate at the end of May 2021.

"Lithuania must ensure the rights of EU citizens living here and incorporate international provisions into national law so that is in line with EU standards," said Lithuania's Justice Minister Evelina Dobrovolska.

In 2014, the European Commission warned Lithuania that the inability of EU citizens to join political parties in the country is in violation of EU Law. At that time, the Lithuanian Parliament tried to introduce respective amendments, however, the legislation fell through.

On 31st March 2008, the European Court of Human Rights in the case of L. v. Lithuania ruled in favour of the applicant, ordering the country to adopt legislation on gender reassignment procedures.

While in 2017 the Ministry of Justice drafted a Law on the Recognition of Personal Gender Identity, the legislation has still not been adopted. According to the draft law, a legal change of gender would be possible for transgender persons without undergoing gender reassignment surgery.

As Lithuanian media channel LRT reports, at the moment transgender individuals are unable to change their identification documents without completing gender reassignment surgery and must approach the courts for remedy. The Lithuanian Ombudsperson at the Office of Equal Opportunities, Agneta Skardžiuvienė, has emphasised that the courts are overburdened with cases concerning the reassignment procedure and that adoption of the special law regulating the issue would close the loophole in the legislation, protecting transgender persons who often face discrimination as a result.

The Freedom Party, a minority coalition party in the Lithuanian government, stated gender change legalisation as their next goal in 2021.

Tensions around the Istanbul Convention and ratification of same-sex partnerships

The debates around the Istanbul Convention on preventing and combating violence against women and domestic violence have been ongoing in Lithuania after the Parliament included the document in the discussion of the spring session 2021. Signed in 2013, the Convention was submitted by the President for ratification back in 2018 but did not proceed further.

Six #EU member states have failed to ratify the #IstanbulConvention. #Lithuania🇱🇹 is one of them.

Even though the Convention itself does not intend to change the "concept of family", to promote "gender ideology" or to push states towards the recognition of same-sex marriages, leaders of Lithuania's Christian religious communities issued a statement in March 2021 opposing the ratification of the Convention. According to their statement, religious communities are concerned, among other things, about the meaning of the word "gender" used by the Convention "as a social concept, opposed to biological sex" and particularly concerned about the requirement "to include teaching material on “non-stereotyped gender roles” in formal education".

“For these reasons, we do not support the ratification of the Istanbul Convention and the transformation of the above-mentioned provisions into binding legal norms for the Lithuanian state and society,” reads the statement.

Reacting to the growing debates around the ratification, the President of Lithuania, Gitanas Nauseda, said:

"A public inquisition has formed in Lithuania, that is, people who believe that they can say bad things about those who think differently and do so in a peremptory and sometimes disgusting form, and feel they are unpunishable. I don't think we should put up with that."

As a part of a spring agenda 2021, the Parliament is planning to discuss the legalisation of same-sex partnerships through a partnership bill, which received high support from the head of state. The bill may also mean advantages for heterosexual couples by offering an alternative to marriage.

"As president, I will be closely watching this process and I believe it finally needs to acquire a legal expression, which has not been done so far as we have avoided the resolution of these issues, therefore, I absolutely welcome initiatives to finally bring these issues to the Seimas' plenary sitting and make decisions on them," said President Nauseda.

Lithuania is one of the 7 states of the European Union that does not legally recognise any forms of same-sex partnerships.