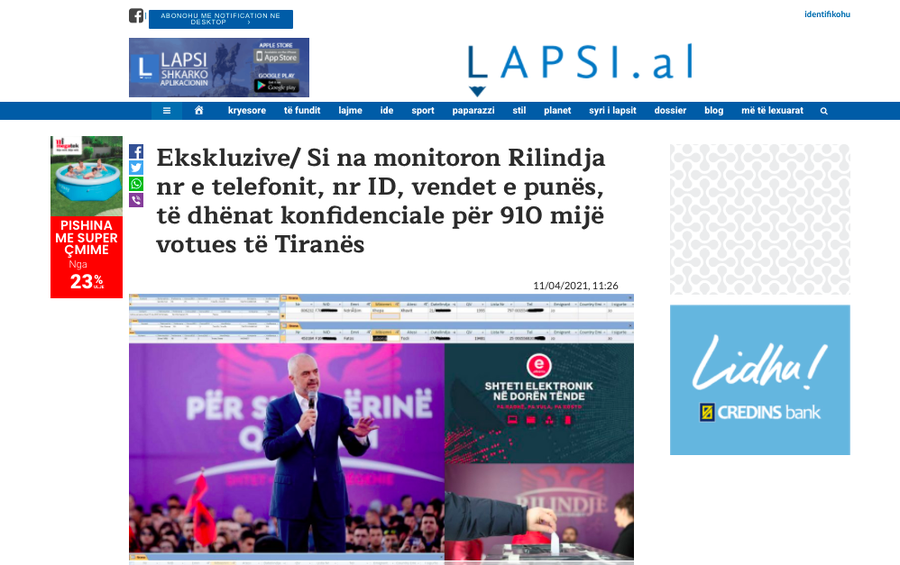 In the reporting period, Freedom House published a report categorising Albania as a Nation in Transit, noting how “Civil society rating declined from 5.00 to 4.75 due to violence between protesters and security services in May 2020“. In addition, it noted that

Despite calls for the restriction of mass gatherings and public rallies, citizens have gathered on public squares across Albania at the political parties’ rallies in the build-up to the 25th April 2021 general elections. The turbulent pre-electoral atmosphere in Albania was marred with incendiary rhetoric and a shooting outside the capital, which left one person dead and four injured on 21st April 2021.

In March 2021, the government included concerning provisions in the Electoral Code which may have a potential chilling effect on media freedom during the electoral period. The changes relate to the manner and duration of election-related information, but a critical aspect of these changes is that they involve dizzyingly high penalties for non-compliance and could shut down TV stations for two days if they fail to comply with the code. The amendments provoked reaction by Reporters without Borders (RSF), which urged the authorities to reduce the foreseen restrictions and fines.

#Albania🇦🇱: Ahead of Parliamentary election @RSF_inter is concerned about excessive sanctions media are facing with new amendments on #ElectoralCode which allow the State to shut media for 2 days & impose heavy fines. @RSF_inter asks @AlbGov to immediately reduce these sanctions! pic.twitter.com/OmNAi6xo7r

In mid-April 2021, media revealed a data leak of more than 910,000 Albanian citizens’ personal information, which was allegedly collected illegally by the government to be used in the electoral campaign. After the media portal Lapsi.al refused to reveal its sources, the Special Anti-Corruption and Organised Crime Prosecution ordered immediate execution of the court order demanding the portal submit evidence of how they got the alleged document in their possession and hand over their equipment. Albanian law provides that the court may compel journalists to indicate their source if it is necessary to prove the offence. However, the outlet refused, considering that, within the media community, forcing a journalist to reveal sources is regarded as a serious violation of their ability to work and could have a chilling effect on free press. Eventually, the European Court of Human Rights asked Albanian authorities to suspend attempts to seize the mobiles, computers and servers of Lapsi.al, noting that if Albania failed to comply with the measure, they risk breaching Article 34 of the Convention.

The media outlet was also targeted in a public statement made by Prime Minister Edi Rama regarding the scandal. In relation to that, a coalition of media freedom organisations wrote to Prime Minister Edi Rama and Mayor of Tirana Erion Veliaj to call for protection for journalists, media workers and sources. The letter also referred to the attack on Isa Myzyrai, a journalist for Ora News, who was restrained with force by the bodyguard of Mayor Erion Veliaj despite repeatedly identifying himself as a journalist. The mayor’s bodyguards have behaved in a similar manner with journalists or members of the public on several other occasions, including an assault on Ora news journalist Ronaldo Sharka and his crew in the same week.