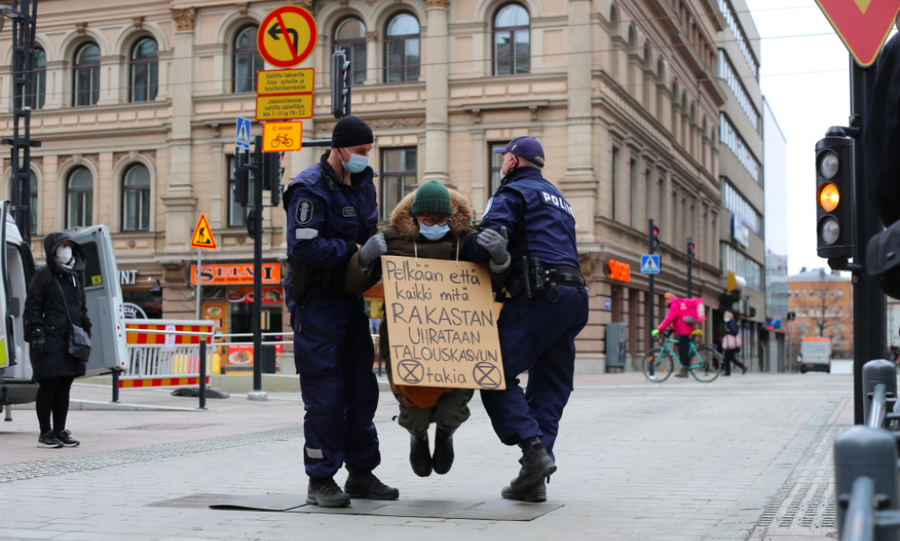 A group of protesters demonstrating against COVID-19 measures, including face masks and vaccinations, gathered in Helsinki on 20th March 2021, in parallel with similar events that took place all over Europe. The crowd did not respect the indications formulated by the police. In fact, the protesters breached the limit of 15 groups of maximum 6 people that was agreed upon before the event with local authorities. About 400 protesters gathered, who failed to wear face masks. One person was held in custody. As a result of the disrespect towards health measures, the municipal police are opening an inquiry into the gathering.

A more recent protest was organised on 10th April 2021 in the Finnish capital city. About 300 protesters were involved and the police took 20 protesters into custody for violating health restrictions. Furthermore, 10 drivers were fined for disruptive driving as part of the demonstration.

On 23rd April 2021, six protesters from Elokapina (Extinction Rebellion Finland) were arrested during a blockade. Some protesters were fined for failing to comply with the police’s instructions. Police say that protesters were blocking roads and causing traffic disruptions.

Women in the Finnish government targeted by hate speech

In February 2021, the NATO Strategic Communications Centre of Excellence published a report which denounces gender-based online harassment targeting women ministers in the Finnish government. Misogyny and sexism have been identified as predominant patterns that characterise abusive messages received by women ministers being sent by some opposition supporters. The research shows that most users sending harassing messages are anonymous, but are genuine users who are not bots. In a recent article, Politico.eu interviewed women politicians in the ruling coalition, who talked about their reaction to hate speech. Iiris Suomela, member of the Green party, stated that online harassment has a severe impact on democracy, due to the fear that it causes among women.