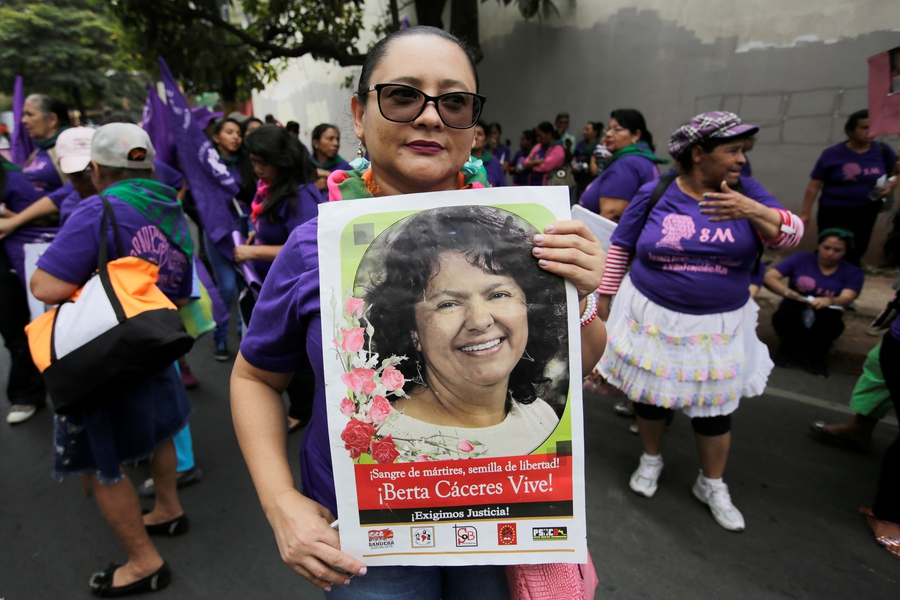 On 16th March 2021, during its 46th session, the Human Rights Council adopted the Universal Periodic Review (UPR) outcome for Honduras. The country’s human rights record was examined by the UPR Working Group, whose recommendations included:

Honduras supported 203 out of 223 recommendations received in its review and noted 20. The outcome and the country’s engagement were welcomed by civil society organisations such as CIVICUS and Redlad. However, they noted that Honduras only partially implemented eight of 30 previous recommendations related to the space for civil society. In this regard, the organisations called on the country to take proactive measures and urged States to ensure follow-up to the implementation of their recommendations.

Another community leader & defender of natural resources assassinated in #Honduras

On 21st March 2021, environmental defender and Lenca Indigenous leader, Juan Carlos Cerros Escalante, was shot and killed in the Cortés department. The defender was president of advocacy group Communities United and campaigned against the construction of hydroelectric dam El Tornillito on the Ulua river. National Police Inspector Juan Sabillón said one suspect was detained in connection with the killing and several others were under investigation. The Inter-American Commission on Human Rights (IACHR) called on authorities to continue investigating Cerros Escalante’s murder, with an ethnic-racial approach and taking into account his work as a land defender.

As previously reported on the Monitor, two other Indigenous defenders were killed in Honduras in December 2020.

Criminalisation of defenders and other legal cases

The two defenders had their first hearing at a local court in Trujillo on 7th March 2021. Civil society organisations reported a heavy police presence outside the court, and also said the presiding judge did not allow the presence of human rights observers at the hearing. Both defenders were conditionally released while their trial is ongoing. According to OFRANEH, 36 people in the region have been accused of land usurpation in the context of increased land conflict in Trujillo.

On a related note, on 4th March 2021 the Inter-American Court of Human Rights held a hearing in the cases of the Garífuna communities of Punta Piedra and Triunfo de la Cruz. During the event, Commissioner Joel Hernández García asked the Court to request information from Honduras on the implementation of the sentences in these cases and expressed concern about the lack of investigation into the abduction of Garífuna leaders in July 2020, saying they could potentially amount to enforced disappearances.

🇭🇳 On March 17, #Guapinol water defender Jeremías Martinez was acquitted of the charges of usurpation and damages, but remains in prison. The defender has been deprived of his freedom since December 2018.

In a separate case, the Guapinol Resiste group denounced the lack of transparency of the Honduran State. The group, which supports criminalised Guapinol water defenders, accused Honduran authorities of providing misleading information to the IACHR in a public hearing on 19th March 2021. They said Nelson Molina, representing the Attorney General’s Office, told the IACHR that the defender Jeremías Martínez had been released after an acquittal on 17th March 2021. However, while Martínez was acquitted in a case related to his actions during a protest, he is still under arrest because of other charges against him and seven other Guapinol defenders.

In developments related to the killing of environmental defender Berta Cáceres, the trial of executive Roberto David Castillo began on 6th April 2021. Castillo, former president of Desarrollos Energéticos (DESA), was indicted as the suspected intellectual author of the murder. On the days before the trial, Cáceres’ daughters Bertha and Laura Zúñiga were reportedly harassed by police. They have petitioned the Court to allow their family to attend the trial, which is taking place without observers.

On 22nd March 2021, journalist Charly Pineda of Hable Como Habla warned that he had received death threats for reporting on crime and violence in La Esperanza, Intibucá department. The reporter, who said he had received repeated threats since 2019, has temporarily moved to a different region with his family.