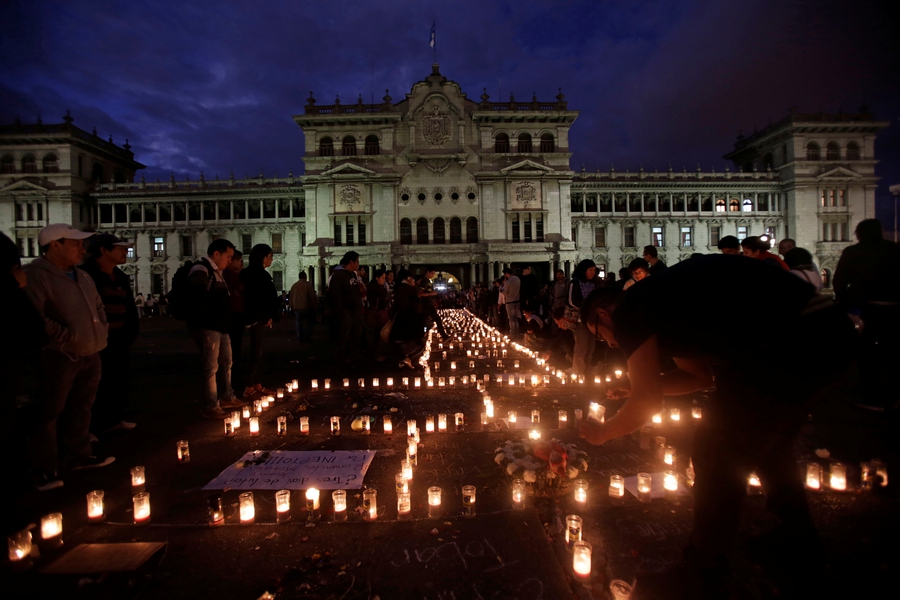 A vigil for victims of fire at the Virgen de Asuncion home in San Jose Pinula, March 2017. (REUTERS/Saul Martinez).

Nos Duelen 56 reported the murder of María Elizabeth Ramírez, a mother who had sought justice for her daughter and 40 other girls who died in a fire at government-run home Hogar Seguro Virgen de la Asunción, in circumstances that involved alleged inhuman treatment. Ramírez, who was found dead in Chiquimula on 21st February 2021, was a plaintiff in the lawsuit against public officials accused of being responsible for the children’s deaths and for abuses at Hogar Seguro Virgen de la Asunción. Nos Duelen 56 and other civil society groups demanded an investigation into potential connections between the homicide and the safe home case, highlighting that both parents of another victim were killed in 2018. In March 2021, Elsa Siquín, subcoordinator of Nos Duelen 56, was also threatened and attacked.

In a separate incident, over the weekend of 20th March 2021, burglars broke into the office of law firm Bufete para Pueblos Indígenas (Office for Indigenous Peoples) in Guatemala City. As reported by IM-Defensoras, the assailants broke down the doors of the office, stole eight computers and retrieved the security recording. They also reportedly searched and damaged documents. The Office supports defenders of Indigenous rights and is currently litigating important cases related to the recovery of ancestral lands. The organisation also provides legal support to criminalised human rights defenders. Their director, Wendy López, told news media that police has treated the case as a common burglary, despite indications that the incident might have been linked to the organisation’s work.

In March 2021, journalist Asier Vera was targeted by a smear campaign. As reported by Reporters Without Borders (RSF), accusations against Vera were graffitied at a key avenue in Guatemala City. The journalist filed a complaint and informed the Ombudsperson’s Office, given the gravity of the accusation which associated him with paedophilia. On social media, users continued to smear him using photos of the graffiti. One message, for instance, read: “Journalists are very good at tearing apart the reputations and names of others, but when someone writes something against them, they quickly jump to file complaints. Asier el Tocaniñas. #DoubleStandard”. The journalist told RSF that he believes the defamatory attacks are in reprisal for his work investigating the Hogar Seguro Virgen de la Asunción case and covering the trials of public officials involved.

On 9th March 2021, journalists’ association Asociación de Periodistas de Guatemala (APG) condemned the limitations on news coverage imposed by the mayor of Santa Lucía Cotzumalguapa and other municipal authorities. Journalist Manuel Peralta, with Nuestro Diario, and reporters of Relax TV and Cotz Noticias said that the municipality’s employees had prevented journalists from covering newsworthy incidents, ignored requests for interviews or comments and failed to share the mayor’s agenda and other information of public relevance. The communicators added that the current administration has also denied access to meetings of the municipal council.

On 26th March 2021, IM-Defensoras reported that Guatemala’s government dismissed a communications adviser from the National Civil Service Office after she promoted a campaign against gender-based violence. María Alejandra Morales is one of the organisers of the “Tengo Miedo” (“I Am Afraid”) campaign, which is aimed at sensitising the general public to the violence experienced by Guatemalan women and girls. The campaign was publicly criticised by government officials and its organisers also reportedly faced a smear campaign, including the dissemination of private information on social networks. Morales sought a protective writ before the Constitutional Court, alleging that the government had violated her right to freedom of expression, among other rights. Guatemala’s Ombudsperson’s Office recommended a review of Morales’ dismissal, given indications that it may have lacked due cause.

At the end of March 2021, elPeriódico and its president, journalist Jose Ruben Zamora, were targeted by a smear campaign for the newspaper’s reporting on an alleged corruption case involving the owners of broadcaster Albavisión. Guatemala’s Ombudsperson condemned threats and defamatory attacks on journalist Zamora, recommending an investigation by the Public Ministry.