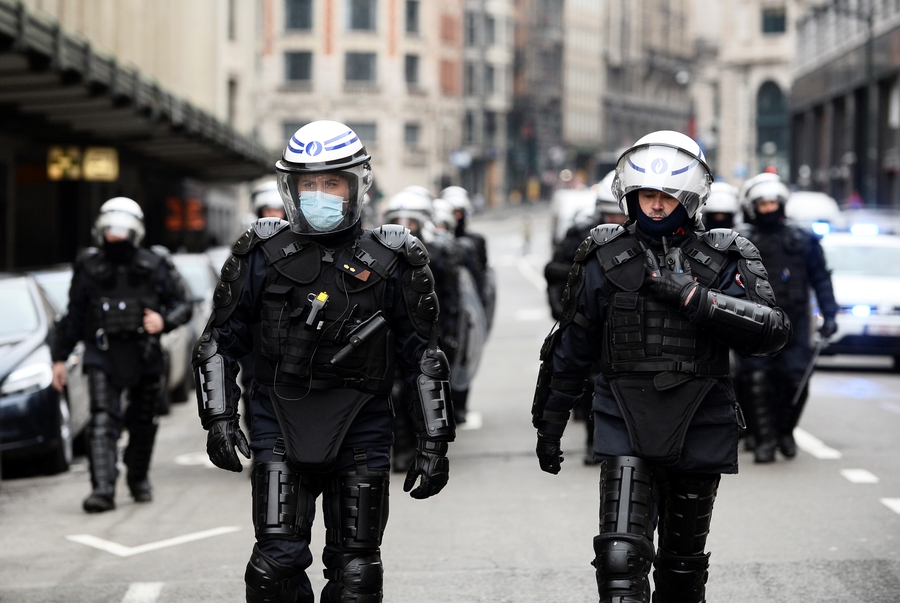 Excessive use of force by police has come under the spotlight (REUTERS/Johanna Geron via Gallow Images).

During the first half of February 2021, Belgium witnessed a decrease in the number of weekly reported cases of COVID-19. However, the situation remained concerning, especially due to the spread of new strains of the virus. Despite the government’s decision to lift certain restrictions--such as hairdressers re-opening on 13th February 2021 -- teleworking continues to be mandatory, and a ban on non-essential travel was extended until 1st April 2021.

Due to COVID-19 restrictions, demonstrations in Belgium are limited to a maximum of 100 people, and participants must respect social distancing. If a minimum physical distance of 1.5 metres between protesters cannot be respected, the use of face masks becomes mandatory. Furthermore, as stated in article 26(2) of the Belgian Constitution, for an assembly to take place in Belgium it is obligatory to obtain prior approval from the municipal authorities.

Three major protests against racial and classist injustice were met with excessive force by police, according to the Belgian League of Human Rights (LDH). On 27th November 2020, during a “Justice for Adil” protest in Anderlecht, nearly 90 people were arrested including many minors. During detention, several testimonies report `’beatings, strangulations” and “racist insults”. Adil was killed by police officers during a chase by Brussels police in April 2020.

On 17th January 2021, a protest was staged for “Justice for Ibrahima”, who died on the evening of 9th January 2021, following his arrest. During this protest, 116 people, including 30 minors, were arrested. Police used excessive force which included the use of tear gas and point-blank use of a flashball, a semi-lethal weapon.

On 24th January 2021, the police initially prohibited, then “tolerated” a protest against racist and classist injustices in Brussels and allowed people to assemble from 2:00 until 2:45 PM. The LDH criticised the police for breaching the right to demonstrate and for the use of disproportionate force. According to the LDH, not only did the police first prohibit the protest but (while tolerating the event) also proceeded to intimidate people who may have intended to participate in the demonstration. In addition, the LDH highlighted the “disproportion of police deployment” which included: riot police, around thirty police vehicles, dogs, cavalry, pumpers, drones and a helicopter. Clashes occurred between the protesters and the police when the assemblies’ participants were asked to disperse and more than 230 people were arrested -- including 86 minors between the ages of 15 and 17. The seeming arbitrariness of the police’s detentions was also condemned by the LDH, since there were reports of detainees being arrested without allegedly having participated in the protest. While in detention, several detainees reported having been subject to physical violence or racist and sexist insults and police failed to respect sanitary measures for those arrested, with vans and detention cells reported to be overcrowded. Police opened an internal investigation due to the reports of the excessive use of force against demonstrators.

“It is not only the infringement of the right to demonstrate and the disproportionate police system that occurred there that worries us, but also the police violence against racialised people in general, the police violence (physical and psychological) that took place in public spaces and in barracks in the context of these demonstrations, and in particular against racialised people, the way in which health measures are used to prevent citizens from demanding justice for the victims of police violence and an end to police impunity in this regard, the arrest of a large number of minors as well as ethnic profiling during the demonstration.”(translated from French)

In a separate development, on 31st January 2021, the Belgian police arrested more than 480 protesters in Brussels. The protest against COVID-19 measures was not authorised by the police on account of concerns that the assembly would result in the breaching of COVID-19 restrictions. Regardless of the prohibition, hundreds of protesters gathered in central Brussels to demonstrate against the current rules in place to curb the spread of the virus. According to the police, the detainees were released shortly after being ID-d.

On the night of 13th February 2021, approximately 20 people were arrested during a demonstration that wasn’t announced to, nor accepted by, the authorities. About a hundred protesters participated in the unauthorised demonstration, organised by the collective Feminists Fight Back, to call for the full respect of women and LGBTI rights and for an end to the violence perpetrated against these groups. Whilst the police claimed the assembly’s participants were arrested for compromising public order and not complying with the COVID-19 rules, demonstrators denied the accusations. According to Feminists Fight Back, the only moment when it was not possible to maintain social distancing was when the police surrounded the protestors and confined them to a small area. One of the protestors also stated:

“The police surrounded us with the classic riot gear: batons, shields, helmets (...). In doing so, they immediately adopted a hostile attitude, while leaving no room for dialogue in order to find a satisfactory outcome, which would have had the benefit of avoiding administrative arrests on the one hand, while letting citizens express their opinions in a public space on the other end”.

The feminist collective also reported that several protesters were not able to leave the site and were asked to show their IDs. Additionally, among the twenty detainees was a trans person, who was targeted with transphobic comments whilst at a police station in Anderlecht.

On 10th February 2021 three of the largest lawyers’ associations in Belgium, in an open letter, jointly expressed concern over the Belgian government’s lack of procedure regarding the establishment of COVID-19 rules. Despite acknowledging the need to impose exceptional restrictions to curb the spread of the virus, the signatories stated that the Belgian government cannot undermine the rule of law. The lawyers specifically pointed out that the government has been sidestepping parliamentary debates and votes on the COVID-19 restrictions, and such restrictions have been implemented by cabinet ministers instead. Criticisms were also drawn to the fact that, due to the lack of a legal basis for certain restrictions, judges have imposed different sanctions over the same breaches of COVID-19 rules. Lawyers highlighted the possibility of “public unrest” as a consequence of these illegitimate rules and arbitrary sanctions.

“This concentration of powers in the hands of the executive power, without any parliamentary control intervening, is no longer tolerable. The vague promises of a legal framework which would come into effect in June 2021, and which would only be used to govern the next epidemics, are far from sufficient”.