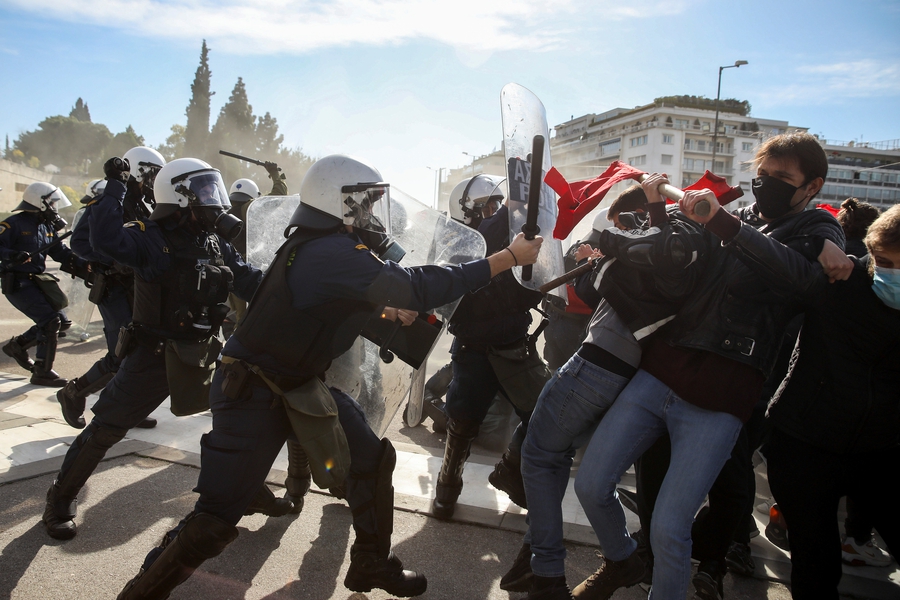 The weekly number of new reported cases of COVID-19 in Greece steadily increased between mid-January and mid-February 2021. Due to this increase, certain parts of the country were placed under stricter measures in early February to curb the spread of the virus -- e.g. restrictions on both national and international flights were further extended, and harsher lockdown measures were introduced in the capital, Athens. At the beginning of February 2021, the Prime Minister of Greece, Kyriakos Mitsotakis, was criticised for allegedly breaching the government’s rules and attending a gathering of more than 30 people. It should be noted that Greece has been in lockdown since November 2020, with restrictions applying, among others, to freedom of movement between municipalities and the attendance of public gatherings.

As previously reported by the CIVICUS Monitor, in the spring of 2020, concerns were raised over the adoption of new regulations that would transform the legal framework concerning the registration of Non-Governmental Organisations (NGOs) working in the field of migration, asylum and social inclusion. In this context, the Expert Council on NGO Law of the Council of Europe called on Greece to revise these rules and bring them “into line with the European standards”. However, in September 2020, the Greek government introduced a new Joint Ministerial Decision (Ministerial Decision 10616/2020) that places further restrictions on civil society organisations (CSOs). According to the current legislative and regulatory framework, Greek and foreign NGOs working in the field of migration, asylum and social inclusion must fulfill an exhaustive list of formal and substantive requirements in order to be able to register both themselves and their staff, members and volunteers with the Ministry of Migration and Asylum.

It is important to emphasise that registration is a pre-requisite for these NGOs to be legally allowed to operate in Greece. Minos Mouzourakis, Legal and Advocacy Officer at Refugee Support Aegean, explained to the CIVICUS Monitor that, among the vast amount of bureaucratic documentation that must be provided, NGOs are obliged to submit audit reports from the last two years -- which entails costs that may be a burden to small grassroots organisations. Mouzourakis also noted that the new Joint Ministerial Decision grants the Ministry of Migration and Asylum complete discretion to accept or reject an NGO’s application. In addition, Mouzourakis highlighted that the lack of sufficient legal certainty as to how an application can be accepted or rejected can jeopardise the right to freedom of association in the country.

Regarding the registration of an NGO’s staff, members or volunteers, there is also an extensive list of criteria that must be fulfilled -- e.g. individuals must provide their criminal records and have permanent residence in Greece in order to be eligible for the registration. Mouzourakis pointed out that if the Ministry of Migration and Asylum considers that a certain individual of an NGO does not comply with the requirements, both the individual concerned and the NGO are withdrawn from the registration process. Concerns over the transparency of the registration process were also reinforced in late September 2020, when a former political group, affiliated with the ruling party, transformed its legal entity into an NGO working in the field of asylum. Within a week, the NGO in question was approved to receive over five million euros in funding. Mouzourakis stated that:

“If I could characterise this entire process, especially the implementation of the rules, I would say that there is no transparency on how the rules are applied, there is no consistency and no sufficient justification or explanation about them. And setting this kind of legislative and regulatory framework, along with an increasingly hostile political narrative regarding the role of NGOs, risks subjecting NGOs to the will of the government”.

On 21st January 2021, the access of journalists to assemblies in Greece has been restricted due to the introduction of new guidelines into the “National Plan for the Management of Public Outdoor Assemblies”. According to these guidelines, the Greek police are now entitled to designate specific sites from which journalists are allowed to cover demonstrations. Furthermore, the authorities will also assign a “police liaison officer” who will be responsible for providing information to the journalists during the course of the assemblies. Whereas the government stated the guidelines in question aim to guarantee the security of press members, Reporters Without Borders criticised the new regulations for jeopardising media freedom and called for the revision of such provisions.

“The citizen protection minister must review the new national guidelines on policing demonstrations in consultation with journalists’ representatives in order to reach an agreement that does not encroach on journalistic activity and free will...We also ask the Greek police to protect and respect journalists and to immediately stop any act of violence and intimidation against them during demonstrations or in connection with matters linked to the migrant crisis.”- Pavol Szalai, the head of RSF’s European Union and Balkans desk.

#Greece: New national plan for policing demonstrations is likely to restrict media's reporting & access to information. @RSF_inter calls on Minister @chrisochoidis to review the guidelines in consultation with representatives of the country’s journalists.https://t.co/9CtRIwenJQ pic.twitter.com/eFjio8e1D7

On 26th January 2021, in an effort to curb the COVID-19 pandemic, the Greek government imposed a ban on public assemblies with over one hundred participants until 1st February 2021. Despite such a ban, on 28th January 2021, approximately 5,500 people peacefully protested in Athens and Thessaloniki against a government education bill that, among other aims, intends to implement disciplinary measures that would scrutinise students for displaying banners and posters at university, thus limiting free expression, and would establish a police force at university campuses. Regarding the police force, even though the police officers would be unarmed, they would be qualified to arrest students and demand the presence of riot police when necessary. Prime Minister Kyriakos Mitsotakis stated that the education bill will increase the level of security in universities -- in fact, it should be noted that cases of unrest in Greek universities where professors’ offices were invaded and the university's equipment was vandalised have been reported recently. However, protesters considered the bill’s provisions to undermine democracy and represent a step back in terms of freedom of expression. According to the Assistant Rector at the Athens Polytechnic, Evangelos Sapountzakis:

“Externally sourced security that doesn’t answer to university authorities puts into doubt the freedom of the academic environment”.

It is also worth mentioning that police have been banned from university campuses in Greece since 1982, after an incident that occurred in 1973 at the Athens Polytechnic University where the police brutally suppressed a student demonstration against the military dictatorship in power at the time.

On 10th February 2021 protesters once again took to the streets in order to restate their opposition to the education bill and call for its complete withdrawal. On this day, demonstrators – who numbered almost 5,000 -- were met by Greek riot police who used tear gas, and fifty-two people were taken into police custody. Photojournalist Giannis Liakos was also beaten by police while covering the protests. Konstantinos Zilos, another photojournalist present at the demonstration, criticised the police for repeatedly hindering the journalists’ work by preventing journalists from reaching certain sites or by blocking their cameras or equipment (see more under expression).

#University #students #clash with riot #police during a #protest against the new bill on higher #education in front of the #Greek Parliament in #Athens, #Greece, 10 February 2021. @YannisKolesidis pic.twitter.com/wCqDxQCkGL

On 11th February 2021, the education bill was approved by the Greek Parliament with 166 votes in favour and 132 against. Following the bill’s approval, demonstrations erupted again, namely in Thessaloniki where, on 22nd February 2021, over 30 people were arrested for occupying one of Aristotle University’s buildings as a form of protest. There were also several reports on the excessive use of force by the police.

Freedom of assembly in Greece may also be compromised due to a law, adopted in September 2020, that allows police to use portable cameras -- e.g. drones -- to surveil demonstrations. However, in order to use such equipment, police must abide by several established rules. For example, an administrative decision regarding the use of portable cameras on a specific demonstration must be announced and made public, and an assessment regarding the necessity and proportionality of such a measure must be conducted. According to Eleftherios Chelioudakis, lawyer at Homo Digitalis, the police have already used drones in at least two demonstrations that occurred in November and December 2020. Nonetheless, on both occasions the Hellenic police failed to publicly announce its intention to surveil these protests and to provide an assessment of the necessity and proportionality of using such devices. Chelioudakis told the CIVICUS Monitor:

“Democracy is all about going to the public space, speaking your mind and demonstrating your objection to the public authorities’ rules, policies or decisions, and the use of portable cameras by police officers can have a chilling effect on people’s participation in public demonstrations, since they may feel their private life is not protected in public spaces”.

By summer 2021, the Greek police intend to start using facial recognition technology in their everyday work. Through smartphone-like devices the police will be able to collect biometric data -- namely facial snapshots and fingerprints -- and, by running the collected data on national and international databases, identify individuals in real-time.

Eleftherios Chelioudakis told the CIVICUS Monitor that despite the fact that irregular migrants are presumed to be the most targeted group for the use of these tools, the implementation of such technology can also negatively affect a broad range of civil rights and freedoms, such as the right to freedom of assembly, since people may refrain from participating in public demonstrations for fear of negative consequences. Chelioudakis also added that Greece does not have a legal regime that allows for the use of devices that collect biometric information in public spaces. For this reason, in August 2020, and following up a request put forward by Homo Digitalis, the Hellenic Data Protection Authority (DPA) initiated an investigation concerning the use of facial recognition tools by the Greek police. According toChelioudakis, even though the investigation is still ongoing, based on the Law Enforcement Directive, the DPA has the authority to freeze the contract concerning the use of facial recognition technology and therefore ban the use of such devices by the police.