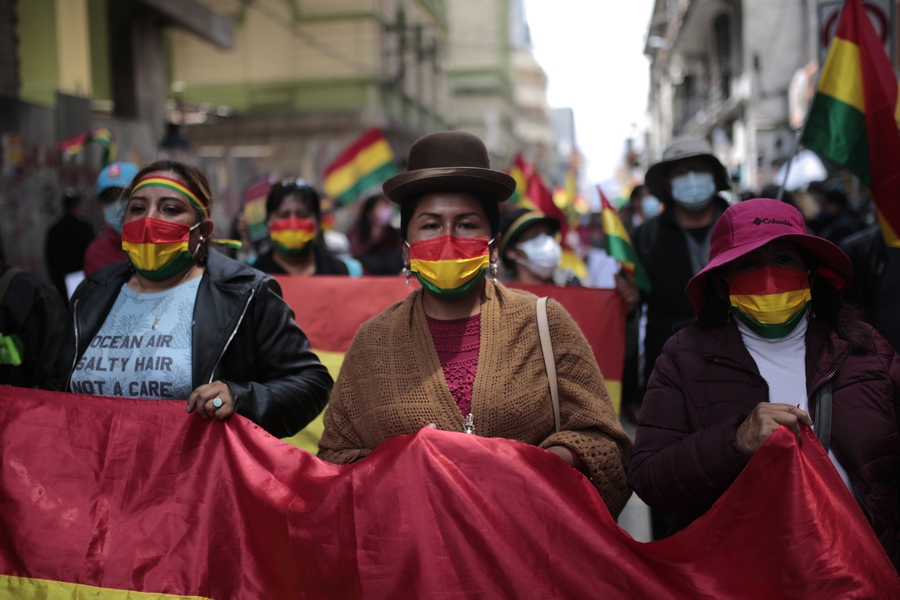 On 18th February 2021, Bolivia legislature approved Supreme Decree 4461, proposed by the current government, which conceded amnesty and pardon to persons deprived of liberty in the context of the political crisis. Using vague language to refer to “political persecution” by the interim government, the legislation reportedly benefitted over a thousand Movimiento Al Socialismo (MAS) sympathisers. The decree also granted pardon to some categories of detainees in response to the COVID-19 pandemic and to reduce prison overcrowding, in cases unrelated to the crisis.

On 13th March 2021, former interim president Jeanine Áñez was arrested in Beni on “terrorism” and “sedition” charges. Hours before, Bolivia’s public prosecutor had issued arrest warrants for Áñez and other members of her government, accusing them of participating in a coup against former president Evo Morales. Opposition groups have classified these actions as “political persecution”, while current government authorities have claimed the detentions were determined by the public prosecutor independently. The arrests have sparked mass protests by opposition groups in La Paz, Sucre, Santa Cruz and other cities. On 15th March 2021, tens of thousands joined a protest in Santa Cruz, one of the regions of the country where the interim government enjoyed more significant support.

While human rights organisations have denounced the persecution of opponents during Áñez's government and called for an investigation into abuses perpetrated in the period, they have also questioned the motivation behind these recent arrests. Jim Shultz, the founder of the Bolivia-focused Democracy Center told The Guardian: “We are in a cycle of retribution. If you’re in a government and the government changes at this point, you can pretty much count on them coming after you.”

Amnesty International said that these arrests seem to indicate the continuation of a pattern of partiality in Bolivia’s justice system, which contributes to impunity for human rights violations in the country. While there is evidence of human rights violations in the post-electoral crisis and during Áñez’s government, the organisation underscored that there is also credible information about violations perpetrated by MAS members and allies. Rather than allowing the justice system to investigate all these different incidents impartially, Amnesty International said the current MAS government has shown leniency toward supporters’ actions. In this regard, Erika Guevara Rosas, Americas’ Director at Amnesty International highlighted the recently approved legislation, saying:

“Supreme Decree 4461 flagrantly violates the State’s international human rights obligations in multiple ways, as it is an amnesty tool with a clear ideological bias that benefits only those people who support the government.”

The organisation called on the government to repeal the decree and make credible commitments toward justice and truth for human rights violations in Bolivia by also showing commitment to due process and an impartial justice system. Similar calls were made by other human rights groups such as Human Rights Watch. The United Nations and authorities from the European Union expressed concern about these developments and called for the observation of due process in Áñez’s and other former authorities’ cases.

In February 2021, healthcare professionals protested against the approval of a Sanitary Emergency Law which, among other things, prohibits the suspension of health services during the COVID-19 pandemic and enables employment of foreign-trained medical personnel. The workers say the first provision determines a ban on health-sector protests, restricting their constitutionally-protected social protest rights. The National Health Council (Conasa) convened a general strike starting on 18th February 2021. On 23rd February 2021, a protest by healthcare workers in La Paz was repressed by police forces using tear gas. The strike continued and was extended by another 15 days on 1st March 2021.

In a separate development, women’s rights groups organised a march in La Paz and other activities during International Women’s Day on 8th March 2021. This year’s mobilisation focused on demanding policies to end femicides and violence against women. In one protest, students of the Universidad Católica (UCB) denounced impunity for cases of sexual violence in the university, sharing their experiences with harassment on campus. Another group, with collective Mujeres Creando, protested near the former presidential palace and were dispersed with tear gas by the police forces.

Civil society organisation Mano Diversa, which defends LGBTQI+ rights, said on 4th February 2021 that they have received daily attacks and threats on social media for their work. Also in February 2021, the killing of a young trans woman, Alessandra Ferretti, in Cochabamba led LGBTIQ+ organisations to demand justice and bolster their campaign for the adoption of legislation against hate crimes in Bolivia.

Other cases of femicide in Cochabamba also gained prominence in February and March 2021, as police forces announced the discovery of the remains of four women who had gone missing between 2017 and 2020. On 5th March 2021, 150 civil society organisations published a joint statement calling attention to gender-based violence as an emergency in the region and in Bolivia – where, they say, 7 in every 10 women report having experienced violence from an intimate partner. The country has the highest rates of femicides in South America, and yet protection services for victims of violence were not classified as “essential services” during the COVID-19 restriction measures.

On 19th January 2021, press association Asociación Nacional de la Prensa (ANP) published a statement asking the government to respect people’s right to information during the COVID-19 pandemic by acting to protect the health of press professionals as well as other workers. In this regard, the ANP expressed concern at the number of deaths among journalists and requested the implementation of health protocols to allow the press to continue their work safely. The organisation asked, for instance, that authorities suspend non-essential events and employ technology such as videoconferences whenever possible. However, they also highlighted that the use of these tools should not serve as an excuse to limit press participation and circumvent journalists’ questions during these conferences.

In another development, on 9th February 2021 68 civil society organisations called on the government to ensure social participation in drafting the Access to Information Bill, which was announced by the Minister of Justice earlier in the month. The organisations highlighted that while Bolivia’s constitution recognises the right to access information, the country is one of three countries in Latin America lacking legislation that guarantees the exercise of this right. In the statement, they called for a public hearing on the bill and for meaningful participation in its creation.