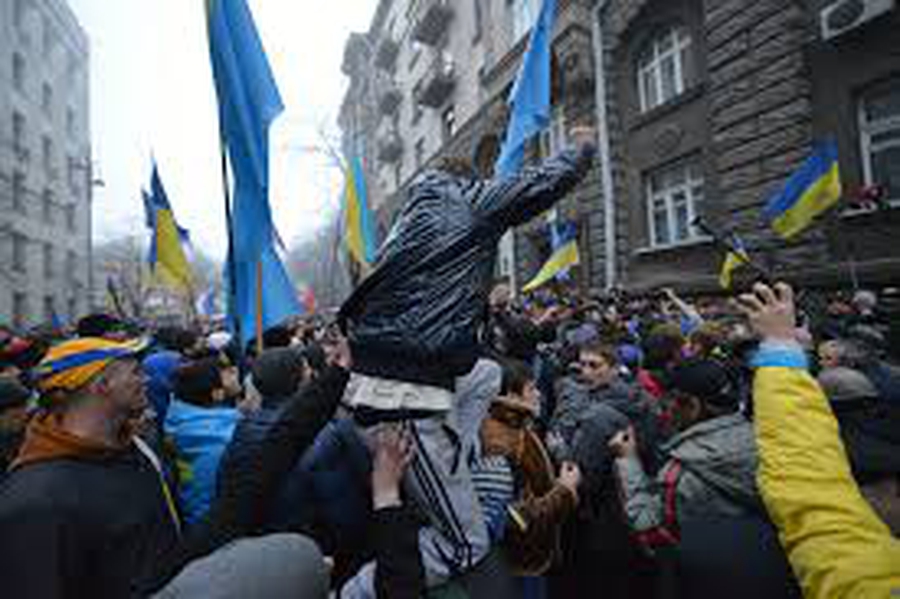 Between October and November 2020, several protests and commemorative actions were organised in Ukraine.

In late October, country-wide public outrage sparked protests in Kyiv after the constitutional court ruled to nullify several anti-corruption laws, which they held were too severe. Over one thousand protesters gathered outside the constitutional court in Kyiv holding placards, some of which read “corruption court of Ukraine,” while others threw smoke grenades into the building. The court’s decision, among others, removed criminal liability for civil servants who file false returns, while also reducing the powers of the government agency which monitors those returns. In response, President Volodymyr Zelensky termed the decision “unacceptable” and a “threat to national security”. Similarly, the National Agency on Corruption Prevention (NACP) also said that the court’s consideration of the anti-corruption laws behind closed doors violated the constitution.

Separately, in early November, authorities introduced additional COVID-19 restrictions to curb the spread of the pandemic, including weekend lockdowns. Workers from bars and restaurants, who were mostly affected by the new measures, protested against the measures outside the Cabinet of Ministers building.

In a similar vein, in December 2020, several other protests against the extension of anti-COVID-19 restrictions took place in the country. On 15th December 2020, protests took place on Maidan Nezalejnosti, as reported by VoaNews and Radio Free Europe. Several thousand people, including representatives of small and medium-sized businesses who were affected by the pandemic and who did not receive subsidies or financial support announced by authorities took part in the protests. Additionally, they expressed dissatisfaction with the effect of the restrictions on religious and public gatherings, and also protested the inadequate capacity of hospitals to properly fight COVID-19, including inadequate bed capacities, reduced number of medical staff and the lack of necessary equipment needed in the fight against the pandemic.

During these demonstrations, the first violent altercations between protesters and law enforcement since the imposition of COVID-19 restrictions were documented. The police used tear gas against those who tried to force entrance into some state buildings, and several people were injured and needed medical attention.

In January 2021, more local protests against the COVID-19 restrictions were organised in Odesa or Kharkiv.

In November 2020, the State Border Guard Service of Ukraine banned several people, including journalists, from entering Ukraine. These included a Moldovan journalist from the Russian RBC news agency who was stopped by the border police in Odessa, and a Russian video production director who was stopped at the Boryspil airport in Kyiv.

Both were banned from entering Ukraine for three years, because they had in recent years visited Russian-occupied Crimea. According to the law in Ukraine, any person who has visited the Crimean Peninsula, without authorisation by the competent bodies of Ukraine, is liable to sanctions. UkrInform news agency reported that people who have been banned from entering Ukraine have visited the Crimean Peninsula through Russia. In 2020 alone, around 7,000 violations of the entry and exit regulations were registered by the authorities.

On 4th November 2018, Kateryna Handzyuk, a civic activist from Ukraine, died after being the victim of an acid attack and suffering burns on 30% of her body. She was involved in investigating corruption by local authorities and law enforcement in the city of Kherson. Her death at that time prompted several protests and demands to ensure the protection of civil society representatives dealing with corruption cases.

Two years after Handzyuk’s death, on 4th November 2020, several Western diplomats called on the Ukrainian authorities to speed up the investigation into her case and to punish those guilty. According to Radio Free Europe, the EU Delegation in Kyiv also posted on its Twitter page, urging Ukrainian authorities to ensure safer working conditions and security measures for civic activists and journalists. In 2019, several people were charged in court for the attack, but some pleaded not guilty.

#Ukraine 🇺🇦 Local police is investigating documents dating back 2012 about plans to murder Pavel Sheremet, a well-known journalist in Belarus and Ukraine, who was killed in 2016. There shall be #NoImpunity for Pavel's murder. https://t.co/Man7ufv0o0

New details emerge in investigations into the murder of prominent journalist

In January 2020, the National Police of Ukraine reported that it had received information about possible suspects responsible for the murder of prominent Belarusian-born Russian and Ukrainian journalist Pavel Sheremet, who was killed in a bomb attack in 2016 in Kyiv. On 5th January 2021, the police announced that an audio recording related to the case, which was in their possession, had already been sent for an official examination. Concurrently, an independent analysis of the recordings commissioned by the Current Time TV Channel and undertaken by an autonomous non-profit organisation known as “Criminalistic Laboratory of Audiovisual Documents”, revealed that one of the voices in the audio belonged to the former chairman of the State Security Committee of Belarus, Vadim Zaitsev.

According to Ukrainian media, the audio recordings contain discussions about the possible killings of several opposition leaders from Belarus. At least three people were mentioned in the discussion, while the fourth person mentioned was journalist Sheremet.

From the very beginning, the investigation did not exclude political motives as being behind the murder of the journalist as he was very critical about the Belarusian leadership.

On 1st December 2020, it was reported that officers from the Ukrainian Security Service (SBU) raided the Hungarian Cultural Association headquarters in Transcarpathia and the home of its chairman, searching for evidence of "activities aimed at violently changing the borders." Confirming the raid, SBU said that they conducted searches at local charitable foundations in the Transcarpathian region, checking "information about the involvement of the foreign fund in activities aimed at violating the state sovereignty of Ukraine." Hungary protested the raids at Ukraine's Foreign Ministry.