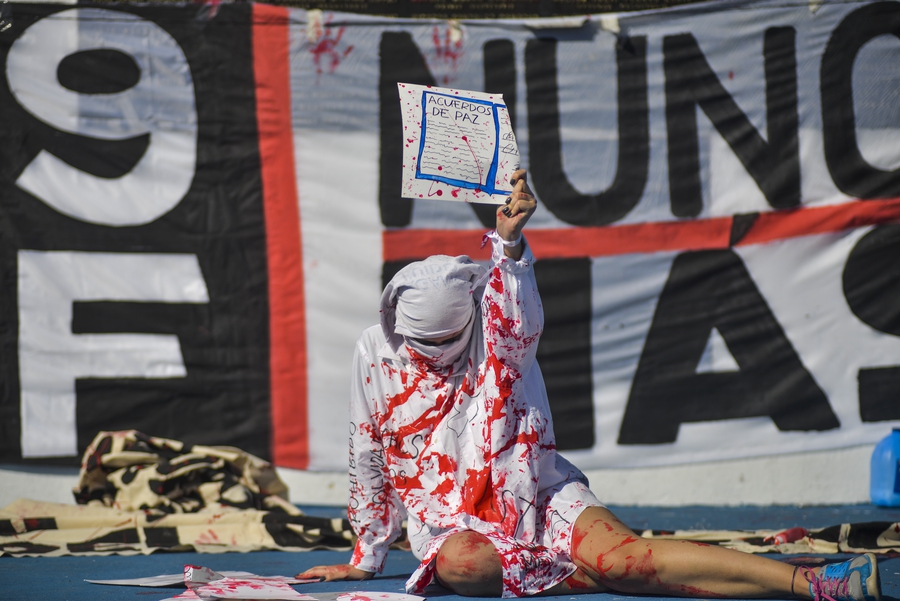 On 28th February 2021, legislative and municipal elections took place in El Salvador. Nayib Bukele’s party Nuevas Ideas won 56 seats, reaching the number needed to secure a supermajority in the country’s single-chamber legislature for the 2021–2024 period. This marks an important change for Bukele, whose party did not exist in the previous legislative elections and whose allies were a minority in the legislature in the previous term.

Female garment workers in #ElSalvador are protesting after their employer #IndustriasFlorenzi reportedly sacked 200 workers without compensation in the context of #COVID19.

Early in 2021, former employees of Industrias Florenzi scaled up protests to denounce the company’s labour rights violations. According to news reports, the textile company failed to pay severance and allegedly owes four months’ salary to around two hundred employees – mainly women – fired during the pandemic. Since July 2020, the company’s factory has been occupied by over a hundred former workers demanding their unpaid wages. Throughout these months the protesters have also organised demonstrations and pressured government authorities to intervene in the case. On 8th January 2021, a group of former employees announced that they would start a hunger strike. On 21st February 2021, a solidarity protest took place in San Salvador’s Metropolitan Cathedral, where demonstrators called for support from catholic authorities and denounced the government’s negligence in this situation.

In a separate development, on 9th February 2021 protesters organised anti-government demonstrations under the banner “9F Nunca Más” (“9 February Never Again”). The protesters rejected authoritarianism and recalled President Nayib Bukele’s actions a year before, when he occupied El Salvador’s Legislative Assembly with a military contingent to push lawmakers into backing his security policies. Student organisations marched near the University of El Salvador, while another group gathered in front of the country’s Legislative Assembly, holding pickets with messages such as “there is no peace with hatred”. Army veterans in Usulután also mobilised. A protester told La Prensa Gráfica: “As veterans and disabled people who lived through the armed conflict and are aware of our history, we want to live in a country with democracy and we reject the outrage that was committed.”

National and international human rights organisations also commemorated the date, sharing reports and analyses on the impact of Bukele’s actions on 9th February 2020 on El Salvador’s democracy. Ombudsperson José Apolonio Tobar commented: “It is necessary to demonstrate what happened on 9 February, since El Salvador’s institutional system was about to break down and throw away the efforts that have been made since 1992 to consolidate a system of checks and balances.” The Coordinadora Salvadoreña de Movimientos Populares (Salvadoran Coordinator of Popular Movements) also demanded that the Attorney General conduct an investigation into the incident.

On 23rd February 2021, the Inter-American Commission on Human Rights (IACHR) and the organisation’s Special Rapporteur for Freedom of Expression underscored the stigmatisation and harassment of journalists in El Salvador’s election context. In a message on social media, the IACHR said there had been various cases of reporters publicly vilified by authorities, public officials and candidates in the run up to legislative and municipal elections.

Similarly, on 24th February 2021 the president of El Salvador’s Journalists’ Association (APES), Angélica Cárcamo, said the organisation had registered 26 violations of press freedom during the election campaign. In one case in January 2021, for instance, San Salvador’s mayor Ernesto Muyshondt sought to discredit a woman journalist’s work during an interview, after she asked him about alleged mass dismissals of municipal employees and salary delays.

APES has also registered cases of journalists facing public vilification for their work covering the COVID-19 pandemic. On 18th February 2020, president Nayib Bukele discredited the work of reporter Cecibel Romero of Salud con Lupa after she posted a Twitter thread on the arrival of vaccines to El Salvador. Following the president’s replies to her posts, the journalist reportedly received stigmatising messages from several users on the social network, including candidates to legislative office for Bukele’s Nuevas Ideas, Chistian Guevara and Suecy Callejas.

In February 2021, civil society organisation Fundación de Estudios para la Aplicación del Derecho (Foundation of Studies for the Application of Law - FESPAD) published a report on the situation of human rights defenders in El Salvador during the COVID-19 pandemic. The organisation said that public officials and authorities such as President Bukele were perpetrators in 72.2% of assaults against defenders registered during this time. These often referred to public vilification and verbal attacks through social media, which according to FESPAD’s analysis have been the key medium used to intimidate and censor people who denounced power abuses, lack of transparency and government policies during the health crisis. Press and free speech advocates were the most frequent targets, with human rights defenders working on the promotion of democracy and on women’s rights also commonly subjected to attacks.

In addition, FESPAD published their annual report on Human Rights in El Salvador for 2020, which the organisation characterised as a year of confrontation between the executive and legislative powers. As described by FESPAD, President Nayib Bukele’s government often bypassed or ignored constitutional norms. In particular, the report notes that access to information rights were among the most affected, with little transparency in relation to the pandemic and a failure by the government to comply with Access to Information laws.