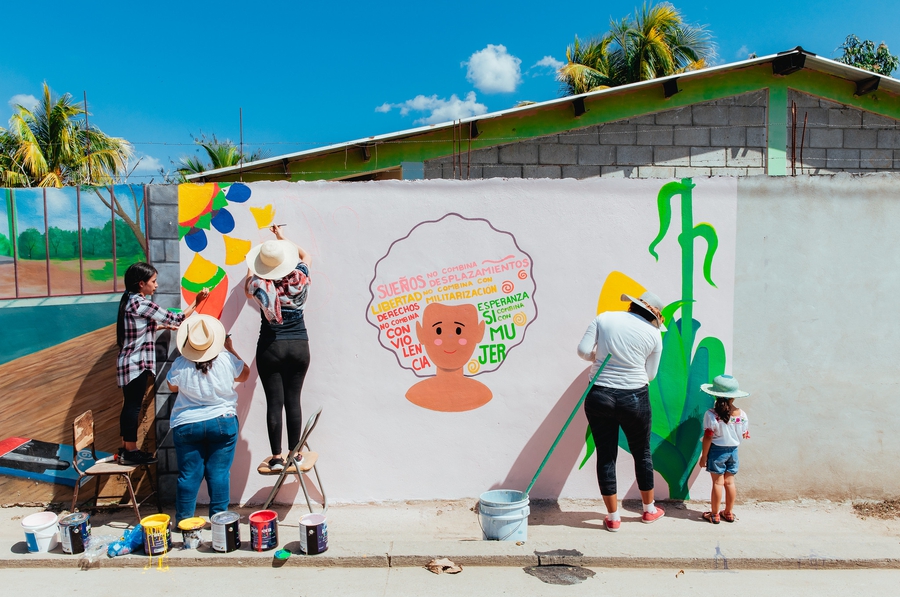 In early February 2021, police forces in Honduras repressed protests for justice in the case of Keyla Martínez, a nursing student who died under police custody in La Esperanza, Intibucá. The case sparked outrage in Honduras as police initially claimed Martínez had committed suicide after being detained for alleged curfew violation and “scandal in a public space” on 6th February 2020. This version was questioned by the young woman’s friends and family. Following public pressure for an investigation, the Public Prosecutor’s Office published a statement saying an autopsy had showed evidence of a potential homicide.

On 8th February 2020, people in La Esperanza protested in front of the police station, but the demonstration was disrupted by anti-riot police using tear gas. Civil society organisations also reported that police had fired live rounds at demonstrators. The Office of the UN High Commissioner for Human Rights (OHCHR) in Honduras condemned the police repression and excessive use of force during the peaceful protest in La Esperanza. Women’s rights groups and university students in other cities also organised protests and a campaign on social media under the hashtag #JusticiaParaKeyla. On 10th February 2021, five university students were detained at a protest in Tegucigalpa for allegedly setting fire to a police motorcycle.

Human rights defender Yajaira Calix Vanegas went missing on 2nd January 2021, said the Red Nacional de Defensoras de Derechos Humanos en Honduras (National Network of Women Human Rights Defenders in Honduras) in a statement on 12th January 2021. Vanegas is a member of civil society organisation Comité de Familiares de Personas Migrantes Desaparecidas Amor y Fe, which monitors violations against migrants in Honduras. According to the defender’s friends, she left her house on the day of her disappearance to go to a marketplace in Comayagüela. Civil society organisations have asked the authorities to carry out an investigation.

In a separate development, on 31st January 2021 the group Guapinol Resiste denounced that the Court of Appeals of La Ceiba had not fulfilled its obligation to rule on the pre-trial detention of eight Guapinol water defenders. As previously reported on the CIVICUS Monitor, the environmental defenders have been in pre-trial detention since September 2019. In December 2020, after more than a year of waiting for a bail hearing, Judge Zoé Guifarro in Tocoa denied a request to change their preventive detention measures. Their legal team appealed this decision and denounced unjustified delays in the legal proceedings after the appeal was transferred to La Ceiba. In January 2021, civil society organisations protested and published statements in support of the defenders.

Honduran authorities should conduct a swift and transparent investigation into the killing of journalist Pedro Canelas, determine whether his killing was related to his work, and bring those responsible to justice.https://t.co/VGdqQvy4Ab

On 19th December 2020, radio journalist Pedro Canelas was shot and killed in the southern city of Dulce Nombre de Culmí, Olancho department. As reported by the Committee to Protect Journalists, an unidentified individual on a motorcycle approached Canelas’ car while he was parked outside a convenience store and shot him. The journalist was taken to a local hospital, where he died hours later. Canelas owned Radio Bambi, a radio station where he also worked as a news presenter covering local politics and social issues. His colleagues said he had never mentioned receiving any threats.

On 17th January 2021, journalist Leonel García said that he was being followed by unidentified people. As reported by C-Libre, two people entered a market near television station Canal 21, where García presents a programme, to ask after the journalist and wait for him. A market employee reportedly warned García. Later on the same day, the journalist’s daughter said she was followed by people on a motorcycle. According to C-Libre, García has faced similar incidents over the past three years.

On 12th February 2021, Hoy Mismo correspondent in La Esperanza, Henry Fiallos and his children were threatened via messaging for his reporting of the investigation on Keyla Martínez’s death.

Also in February 2021, C-Libre published a report on human rights in Honduras in the context of the pandemic (“Profundización de la crisis de Derechos Humanos en Honduras derivada de la gestión del COVID-19”). According to their analysis, Honduras’ government has limited access to information and transparency mechanisms during the COVID-19 crisis. Press was banned, for instance, from some events organised to share information on the country’s situation. The report also highlighted alleged “indifference” from the government as human rights defenders and journalists were subjected to attacks.