Freedom of expression under the spotlight - yet again 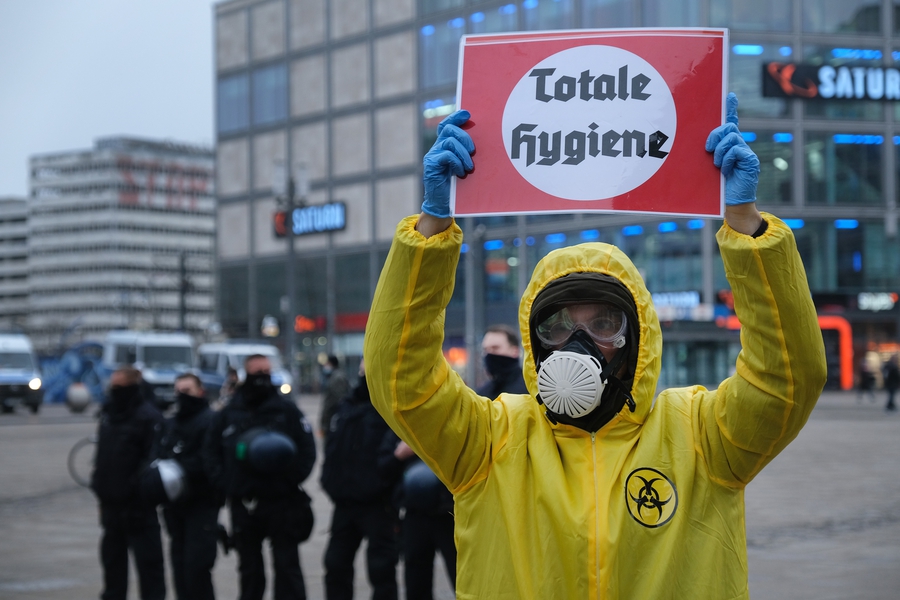 Protests against COVID-19 measures have been ongoing for months (Photo by Sean Gallup / Getty Images).

The Walter-Lübcke school in Wolfhagen, Hesse, was threatened in a letter signed ‘NSU 2.0’, referring to a neo-Nazi cell that murdered immigrants between 2000 and 2007. The school had recently been renamed after a pro-migration politicianWalter Lübcke with Angela Merkel’s CDU, who was shot dead by a Neo-Nazi in 2019. Just days before the letter was received, Stephan Ernst, the shooter responsible for Lübcke’s death, which was considered the first political assassination since the Nazi era, had been convicted to life in prison.

As reported by Mapping Media Freedom, on 10th November 2020 the Volksverpetzer, a German blog aimed at dispelling fake news and that has most recently been tackling facts around the COVID-19 pandemic, was threatened with legal action by Wolfgang Wodarg who is demanding damages of 250,000 EUR alongside an injunction. The lawsuits are in relation to two articles which fact checked statements made by Wodarg, where in one article he is labelled as a “pandemic denier”. Wodarg claims the blog has led to damage to his reputation.

On 23rd January 2020, four protests were scheduled to be staged at Braunschweig train station and on Burgplatz, organised by right wing group Die Rechte calling for "End lockdown - save livelihoods", and a counter demonstration was also being staged in Burgplatz. During the protests, journalists reported that they were ‘de facto’ excluded from the protests at Burgplatz and were only allowed to be in a designated area where they could not hear or see what was taking place. According to the police, there have been past incidents where ‘free press representatives’ gained access to protests, only to provoke violence. Police also said that the presence of the journalists would "provoke right-wing extremists".

On 16th January 2021 farmers, climate and animal rights activists rallied together with about 30 tractors for the annual “We have had enough” demonstrations against the government’s agricultural policies. In addition, due to the COVID-19 pandemic, 10,000 footprints were sent on paper to Berlin and hung on clothes lines during the demonstration. Saskia Richartz, a spokesperson from the We've had enough movement told euronews: