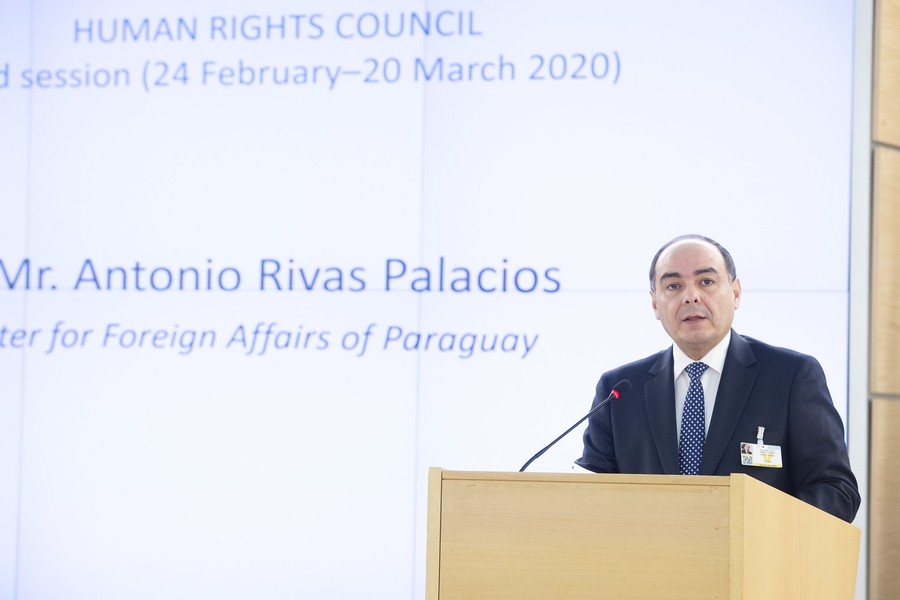 In October 2020, civil society organisation Semillas para la Democracia and CIVICUS published their joint submission on Paraguay to the UN Universal Periodic Review. The report covers the state of civil society freedoms in the country, highlighting the growing hostility, stigmatisation and criminalisation faced by journalists and human rights defenders, and particularly by the members of campesino, Indigenous, trade union and student movements. Paraguay's human rights record will be examined by the UN Human Rights Council in May 2021 as part of the 38th session of the Universal Periodic Review.

In October and November 2020, thousands of rural workers, Indigenous peoples and social organisations mobilised for a series of demands, including social justice, land redistribution andsupport during the COVID-19 pandemic. On 13th October 2020, protesters marched in Asunción and set up temporary camp in central areas of the city. On 12th November 2020, over a thousand people joined another march in Asunción, after several days of protests. The demonstrations were convened by social movements Articulación Campesina Indígena y Popular and the Coordinadora Nacional Intersectorial (CNI).

Belarmino Balbuena, leader of the Paraguayan Campesino Movement, told EFE in November that the government had failed to fulfil an agreement reached the month before, which included commitments such as debt negotiation for rural workers, redirection of resources from the Agriculture Ministry and aid during the pandemic. Balbuena also highlighted that extensive soybean production to the detriment of smallholder farming and inequality in land ownership are at the heart of the problems faced by Paraguay’s campesinos. The country has yet to fully address the issues caused by land concentration promoted during the Stroessner dictatorship.

On 13th December 2020, police violently evicted a campesino settlement in Cerro Yvy, 3 de Mayo district in the province of Caazapá. As reported by Base Investigaciones Sociales (Base IS), more than 150 families were evicted, allegedly without a court order. 37 people were arrested after clashing with police officers to resist the eviction. The Coordinating Committee of Campesino and Urban Workers said that those detained were subjected to ill-treatment.

In a separate incident, in January 2021 armed civilians threatened and attacked campesino families in the Rosarino settlement, located in Maracaná, Canindeyú department. According to members of the camp, the armed group, allegedly hired by land grabbers, shot at the community to intimidate them on 9th January 2020. A few days later, the group returned and shot at a vehicle leaving Rosarino. While a formal complaint was filed, members of the settlement denounced also being threatened with eviction by the local police. The Human Rights Coordination of Paraguay (Codehupy) expressed concern about these attacks, underscoring similarities to other cases in the region which led to violence and killings.

A report published by Base IS on agribusiness in Paraguay, Con la Soja al Cuello 2020, found that more than 14,000 people participated in protests for land rights between August 2019 and August 2020. According to the organisation, at least 5,061 campesinos were affected by violence, repression and evictions in that period. Several movement leaders were criminalised and faced legal charges.

Alter Vida, a civil society organisation promoting sustainable development, denounced being targeted by a defamation campaign due to their work with the Loma Indigenous community in InfanteRivarola, near the border with Bolivia. The CSO has supported the Guaraní Ñandéva peoples, who have undertaken a land recovery process in the region, in projects related to agroecology, water management and animal farming. As reported by Alter Vida, the community has been subjected to threats and intimidation from local ranchers and land grabbers throughout the land titling process.

Meanwhile Alter Vida has been targeted by a smear campaign accusing them of encouraging land invasions, corruption and money laundering, among other allegations. These have been published in major Paraguayan newspapers, reportedly brought forward by Indigenous peoples who are not from the Loma community, with the support of local ranchers. On 9th October 2020, Paraguay’s NGO Association POJOAJU issued a statement in support of Alter Vida and the Loma community, alluding to the smear campaign against them.

Report on human rights in Paraguay

Codehupy published their annual report on human rights in Paraguay, which underscores civil society’s key role in the response to the COVID-19 pandemic, for instance in coordinating the delivery of food and aid and in conveying rights concerns. The report also covers cases related to digital surveillance, including the use of online monitoring by police to identify protesters.

Research conducted by TEDIC found that Paraguay may have used surveillance tactics during the coronavirus pandemic. In one case, the Cybercrime Prosecutor’s Office charged a person for publishing a message on social media with the alleged threat of infecting others with COVID-19. Prosecutors also used content published on social networks to identify and charge anti-government protesters, accusing them of damaging a National Monument. In addition, TEDIC underscored concerns related to the leakage of sensitive information collected for health monitoring and aid implementation programmes, as well as the use of drones to monitor compliance with quarantine measures.

On 3rd January 2021, 24-year-old Paraguayan YouTuber Nery Ariel Aguilera Cardozo was found dead, with his throat cut, in the city of Florencia Varela in Argentina. Cardozo had a YouTube channel where he levelled strong criticisms against the Paraguayan community, angering some nationals of his home country. He was found by his partner, who said Cardozo had previously received threats. According to news outlets, the police are investigating whether the young man was killed in retaliation for his comments on YouTube.