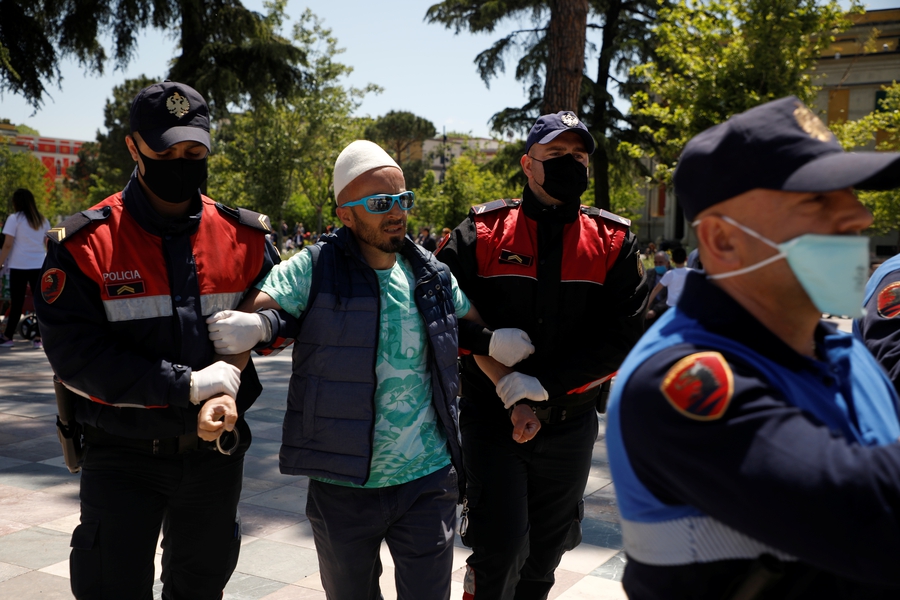 A man is arrested during an earlier protest against COVID-19 measures (REUTERS/Florion Goga via Gallo Images).

The European Commission published its 2020 Enlargement Package report for Albania, emphasising that no progress has been made on the implementation of the process on an enabling environment for civil society. It also noted that the financial sustainability of CSOs remains difficult due to unsuitable fiscal and legal frameworks.

The Monitoring Matrix 2019 Report for Albania found that there is an increase in state institutions’ control over CSOs’ operations through the approval of laws under anti-money laundering and anti-terrorist packages, and mechanisms for state-CSOs’ cooperation are not contributing towards a more enabling environment for civil society development.

In a positive development, a non-governmental organisation, the Local Action Groups (LAGs), was established to sustainably protect the Korab-Koitnik territory by developing the capacity of the local community. Despite a weakening civic space due to the impact of COVID-19, the establishment of LAGs marked heightened civic engagement in nature protection.

LGBTI rights in the spotlight

In a separate development, an analysis by UN Women has reported a rapid increase in violence against women and girls since the onset of the COVID-19 pandemic. The report points out how CSOs are rapidly adapting their work to cater to the urgent needs of women and girls, and specifically in Albania, how the Shelter for Abused Women and Girls, which serves lesbian, bisexual and transgender women survivors of domestic violence, is providing safe accommodation, food, hygiene materials and psychological support.

The Executive Director of Aleanca LGBTI, an NGO that provides support for all gender identities in Albania, has said that the COVID-19 circumstances have worsened conditions of the LGBTI community. She highlighted that a survey of the Albanian LGBTI community showed 25.4% of respondents had been forced to live with their unaccepting families, and there was an overall increase in domestic violence.

The Pink Embassy, an NGO working to protect and advance the rights of the LGBTI community in Albania, called on the government to allow for all people to be able get married and adopt children. The Ministry of Justice has hosted public consultations on two laws relating to family and adoption.

In a statement the organisation said:

“Despite internal requirements and international pressure for Albania to guarantee equality in marriage and the responsibilities that come with it, our country continues to openly discriminate against LGBTI persons, from the right to legally recognise their relationships or families, to care for their children, or to adopt.”

The following protests took place during the reporting period:

For several days, the prisoners and detainees in the detention rooms in Peqin prison have started a hunger strike, in protest against alleged violations of their human rights #albania #humanrights #prison https://t.co/BIMnkMd97L

Dozens of young civil society and political organization activists, supporting the oil workers' protest in front of the Ministry of Infrastructure and Energy, clashed with police after the latter intervened to disperse the gathering.#NationalUnemploymentDay #tirane #albania pic.twitter.com/BjJ9GABjtN

According to a BIRN data analysis, Albania represents a breeding ground for fake news and conspiracy theories, especially since the outbreak of COVID-19. Klodiana Kapo, Executive Director of an Albanian fact-checker, Faktoje, mentioned the shortcomings of state bodies resulting in poor quality of information disseminated to the public.

“What we have seen during this period is a total lack of transparency by the Ministry of Health and all these healthcare institutions, creating a situation in which news is only what is produced by the Ministry which in the meantime made it impossible to verify anything.”

Similarly, a different analysis conducted by a local media portal has found the Albanian government has been failing in its obligations to freedom of information.

As reported by Mapping Media Freedom, Balkan Investigative Reporting Network (BIRN) Albania was notified that a lawsuit had been filed against the outlet by businessman Mirel Mërtiri. Mërtiri is demanding compensation in the amount of 300,000 lek (2,700 USD) for moral damages over an investigative story published on the platform tilted, “The Incinerator: How a Politically-Connected Albanian Built an Empire on Waste”. The story described the political connections and the business endeavours of Mërtiri, who is behind a business empire that includes a broad network of companies registered in Albania and in offshore jurisdictions under the names of close associates. The article states that he was granted lucrative state contracts relate to waste management. The matter will be heard by Tirana District Court.

#Albania: Balkan Investigative Reporting Network @BIRN_Network is sued by influential businessman Mirel Mërtiri after reporting on his political connections and his business endeavours.@BesarLikmeta#PressFreedom

Koloreto Cukali, Director of the Media Council in Albania, said:

“Journalists should do their job and should not be attacked. If there are facts let the facts come out. Aggressive and offensive language towards journalists regardless of which party they come from is intolerable...”

#Albania: @RSF_inter condemns the derogatory remarks of both President & Prime Minister against journalists! @ilirmetazyrtar insulted Adriatik Doçi of @Report_tv_AL when the journalist revealed his possible violation of citizenship law. pic.twitter.com/8UptHeFzLd