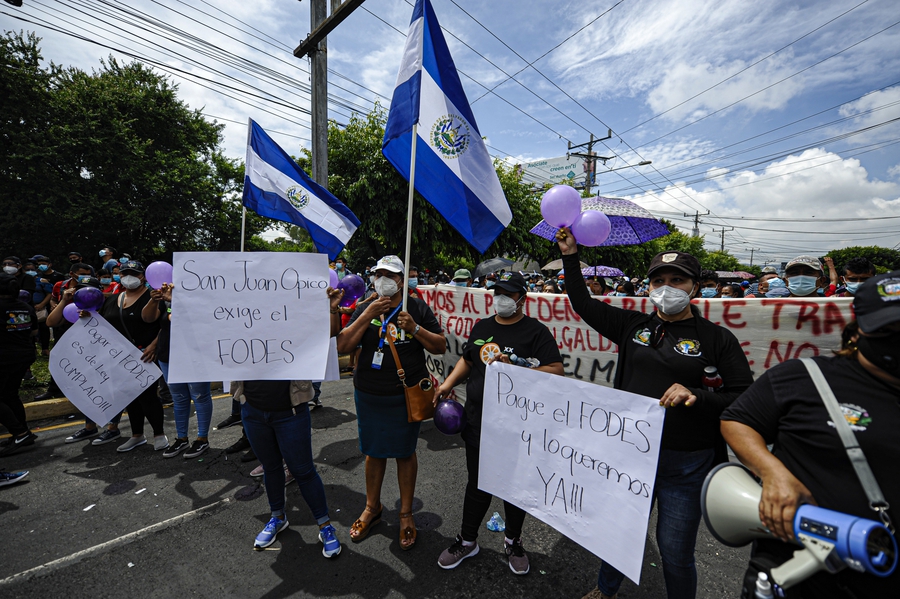 Municipal workers during a protest for payment of resources. 24 September 2020, Camilo Freedman/APHOTOGRAFIA/Getty Images.

In a news conference on 24th September 2020, President Nayib Bukele announced that independent media outlet El Faro was under investigation for alleged money laundering. Without proof, Bukele also accused a number of news outlets including El Faro, the Revista Factum, Gato Encerrado and La Prensa Gráfica of lying and “attacking” his government. El Faro editor Oscar Martinez told the Committee to Protect Journalists (CPJ) that the outlet had been undergoing a tax audit, but was not informed about a money laundering investigation against them.

“President Bukele’s repeated attacks and threats against journalists critical of his administration signal an extremely worrying shift towards authoritarianism.”

On 21st October 2020, a report on press freedom in El Salvador presented before the 76th General Assembly of the Inter-American Press Association (IAPA) warned about stigmatisation, smear campaigns and “fiscal harassment” of critical journalists by the Bukele government. According to the report, the government has retaliated against critical reporting by withdrawing government advertising, subverted access to information institutions and used assets confiscated from private media outlets for government propaganda. For instance, La Página, the outlet that broke the story about an investigation against journalist Héctor Silva Ávalos, has reportedly been controlled by a state agency since its owner was arrested in 2017.

Obstruction of access to information on human rights case

On 21st September 2020, officials of the Ministry of Defence refused to comply with a judicial order allowing the inspection of military files to collect evidence on a 1981 massacre in El Mozote, during the country’s civil war. Minister of Defence René Merino Monroy has claimed that opening military files could threaten national security. On 8th October 2020, the Inter-American Commission on Human Rights (IACHR) and the Special Rapporteur for Freedom of Expression expressed concern at the Ministry of Defence’s refusal to carry out a judicial order, recalling that the Inter-American Court ordered the Salvadoran State to guarantee public, technical and systematised access to archives relevant to investigations on human rights abuses during the armed conflict. On 15th October 2020, a judge and a group of experts were finally allowed to inspect the files.

On 26th October 2020, El Salvador’s Ombudsperson, Jose Apolonio Tobar Serrano, released a statement calling on legislators to advance the discussion of a bill on the protection of defenders. The proposed “Law for the Recognition and Integral Protection of Human Rights Defenders and for the Guarantee of the Right to Defend Human Rights” was presented to the National Assembly in April 2018. Civil society organisations have campaigned for the bill’s approval, as lawmakers of the Justice and Human Rights Commission analyse the project.

In a separate incident reported by feminist network IM-Defensoras, on 25th September 2020 the Twitter account of Red Salvadoreña de Defensoras de Derechos Humanos (Salvadoran Network of Women Human Rights Defenders) experienced several hacking attempts. The organisation has endured other cyberattacks this year, according to the alert.

In September and October 2020, employees of several municipalities nationwide organised protests against a four-month delay in the transfer of resources of the Fund for Economic and Social Development (FODES), used for local development projects. During the demonstrations, groups of protesters blocked key roads and gathered in front of the Ministry of Finance. According to mayors of the municipalities affected, the lack of resources has hindered staff payments as well as the implementation of social and infrastructure projects.