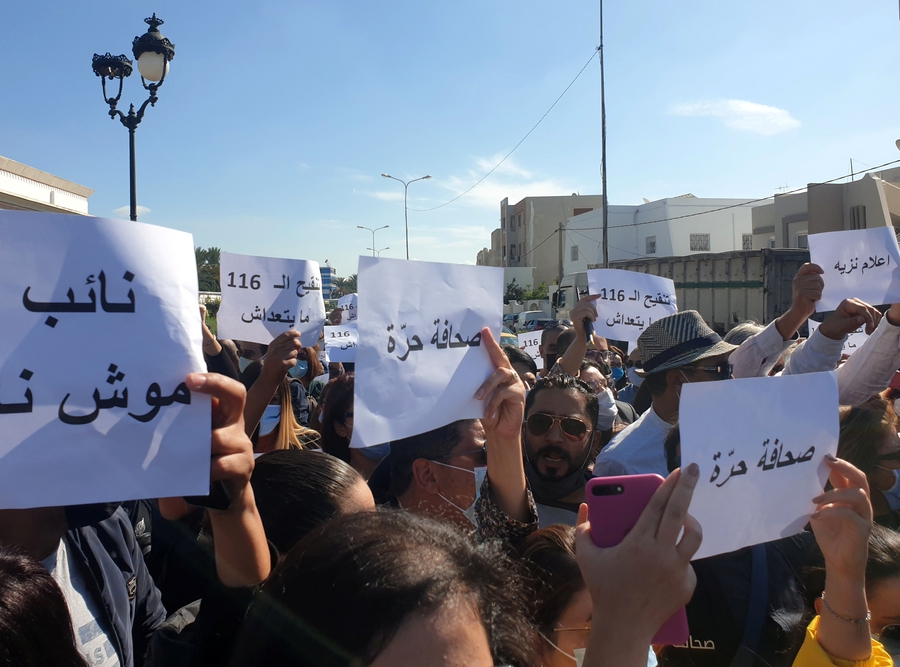 Tunisia is going through an unprecedented global crisis that could lead to increasing social tensions in the coming days. The Tunisian government is reported to expect a14 per cent deficit in its 2020 budget, compared to a three per cent deficit initially estimated at the beginning of the year. Work and production are disrupted and development has been stalled, while people feel threatened by the spread of COVID-19 infections and by the absence of health services. FTDES in its September monitoring report indicated that:

“In the absence of a clear and transparent government discourse and in the light of the existing political debate, social tensions would increase and could threaten social peace by the end of this year unless the government corrects and diagnoses the situation realistically and sets a clear program of action with short and medium-term objectives.”

Accordingly, the total number of social protests recorded in the third quarter of 2020 was 1,946. The number is less than that recorded in the first quarter before the COVID-19 crisis (2,064 protests). However, in light of the challenges faced in the health sector and at the economic, social and security-related levels, FTDES indicated a possible increase in social tensions and highlights that:

On the other hand, violations against protestors remain the key concern of human rights organisations, particularly in light of the submission of the Draft Organic Law No. 25-2015 which aims to protect security forces against attacks which threaten their security and their lives. In a joint letter, human rights groups noted the challenges of the law in terms of increasing impunity and lack of justice. The letter states:

“The new law gives total immunity and therefore allows for lesser justice. The wording of the law itself is vague, leaving room for different and dangerous interpretations, which goes against the principle of legality of offenses and penalties which require a precise text, since it is a text that can deprive the individual of its freedom; one of the most fundamental human rights.....The ultimate danger this new law imposes is the legitimacy it gives to already existing violent practices that we have long fought against and that go against the foundation of a democratic country.”

The International Commission of Jurists (ICJ) also issued a statement noting that Article 7 of the Draft Law would preserve the operation of Law No. 69-04 which permits the use of firearms to defend property, “mitigate” resistance, or stop a vehicle or other form of transport in the context of public meetings, processions, parades, public gatherings and assemblies. It allows for the use of lethal force to disperse an unlawful gathering where other means of dispersal have failed.

“The Tunisian Parliament should reject the Draft Law and conduct a complete review of all laws regulating the conduct of the security forces to ensure they meet standards necessary to protect the population from the excesses demonstrated in the past,” - Kate Vigneswaran, the ICJ’s MENA Programme Senior Legal Adviser.

In a related development, on 6th and 8th October 2020 protests were staged in front of the Assembly of the Representatives of the People against the above law, calling on deputies not to ratify it. However, violence against protesters occurred during the demonstration. According to media reports, protesters were detained without access to their lawyers, some faced physical violence and female protesters were sexually harassed by police officers.

A press release issued by 30 organisations condemned all forms of violence including hatred, harassment and targeting of activists at the demonstration; in addition to the smear campaigns directed against certain journalists who covered human rights violations perpetrated by security services. Such violence was documented on social networks by individuals who do not conceal their affiliation with the security services.

“During these arrests, none of the basic rights of citizens were respected, most important of which is the right of access to a lawyer…. The violations did not stop there but continued by sharing the photos of protesters on the police syndicates’ social media accounts and pages with vulgar accusations and inciting violence towards them, all of which only brings us back to the times where the people were silenced for their basic right to express themselves.”

Rights groups in Tunisia called on the Tunisian parliament not to adopt a proposed amendment to the Freedom of Audiovisual Communication Law (Decree-law 116/2011) indicating that the law, if adopted, would threaten freedom of expression and act as a setback to the achievements that Tunisia has made in this field. In a joint statement the groups noted that:

“The legislative initiative being proposed by the parliamentary bloc “El Karama coalition”, which the Assembly of the Representatives of the People decided to present to the plenary session for discussion and adoption at the beginning of the new parliamentary year, aims to alter the process of appointment to, and renew the composition of the High Independent Authority of Audiovisual Communication (HAICA), in addition to removing its power to issue licences for the creation of TV channels. These two amendments are inconsistent with the spirit of the Tunisian Constitution and the commitments of the Tunisian State to protect freedom of expression and information."

A protests was staged against the bill on 20 October 2020.

In a separate development, a Tunisian influencer, Lady Samara, posted an almost 25-minute homophobic speech on Instagram. Following this, Mawjoudin (We exist), one of Tunisia's only LGBTI organisations started a campaign against hate speech online and expressed solidarity with the queer community. The influencer’s content has since been removed from social media after several complaints were made to Instagram. In addition, Mawjoudin is collecting all posts from Samara to submit a case to Instagram, requesting her removal from the network. A petition which has been circulating calling for #removeLadySamara has already garnered 9,000 signatures.

An influencer in Tunisia known as “lady.samara” posted a rant against homosexuality, endangering Tunisian LGBTQ, community. Her Instagram account, with 467K followers, is still up. Sign this petition to deplatform her. There should be no room for hate.
https://t.co/JEvdlb58Sk

The issue of online attacks against LGBTI individuals is highlighted in a recent study conducted by Mawjoudin and other organisations. The study surveyed 238 individuals who are part of sexual and/or gender minorities, between the ages of 18 and 54 in four countries: Tunisia, Jordan, Egypt and Lebanon. It found that cyber-attacks and cyber-crimes are one of the most impactful issues currently. The report shows that more than half of the survey participants were victims of cyber-bullying and/or cyber-attacks which in most cases are related to their sexual orientation, gender identity and expression and sexual characteristics (SOGIESC). The report concludes that even when such incidents are more aggravated, most survivors prefer not to report them to the police due to the fear of being detained because of laws which criminalise homosexuality and non-normative gender identities.