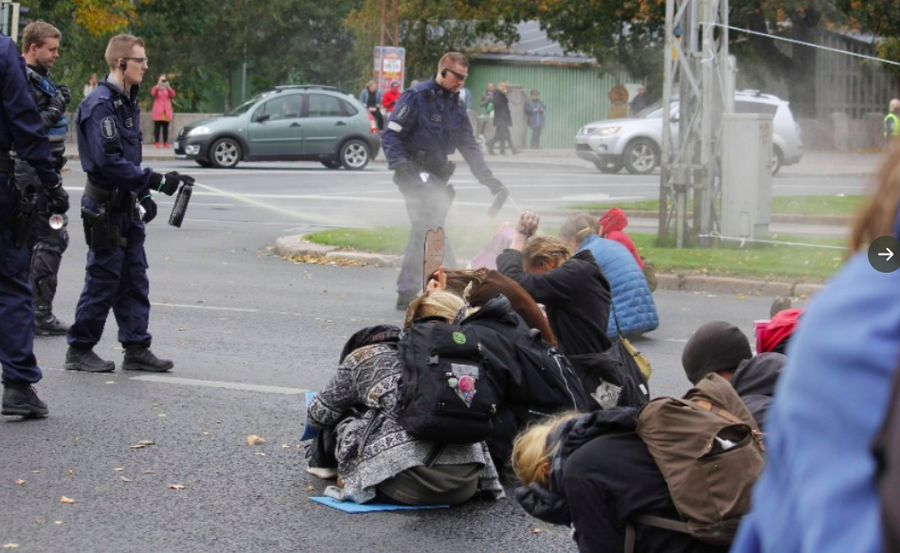 Today, as we were peacefully protesting for climate action, we got pepper-sprayed at point-blank range. We are a nonviolent movement and today's experience of police violence only strengthens my conviction: we are doing the right thing. They are not. #elokapina #XR #syyskapina pic.twitter.com/dttRBZrT5V

In Helsinki, on 3rd October 2020, a peaceful demonstration by Elokapina (Extinction Rebellion Finland) for urgent action against climate change was dispersed by the police by spraying protestors with pepper spray. The incident took place when a group of protestors was asked to disperse and instead stepped into the street, blocking traffic. In a press release, Elokapina reports that after the incident, police also prevented protesters from rinsing their faces with water and that 51 persons were detained. It said:

“Extinction Rebellion Finland finds the forceful actions taken by the police excessive and inappropriate.... Several underaged people were among the sprayed and the detained.”

The Helsinki Police Department tweeted that, “There was a substantial traffic obstruction and, in light of how long the situation had continued, police resorted to the most lenient forcible measure at its disposal to disperse the crowd.”

In response to the incident, the Minister of Interior stressed that use of force must always be a last resort and opened an investigation into the incident. The report presented to her considered the use of pepper spray proportional to the danger caused by the traffic obstruction.