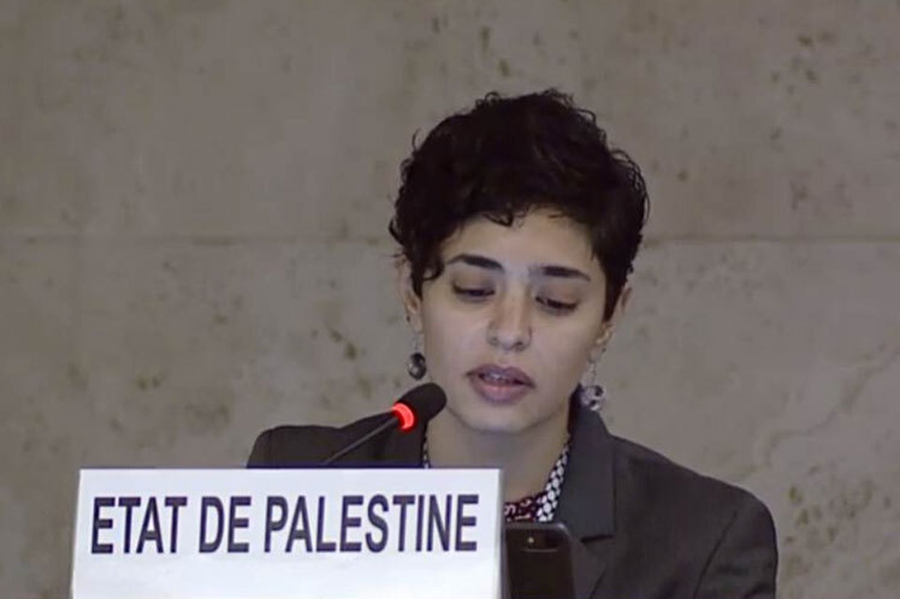 During the 45th session of the UN Human Rights Council (UNHRC), Palestinian human rights organisations, through a joint statement, shed light on the systematic violations taking place due to the Israeli occupations. Palestinian organisations stated that such occupations were aimed at silencing their activities, including their advocacy work at the United Nations. The statement by the Al Mezan Centre for Human Rights, Cairo Institute for Human Rights Studies and Al Haq, Law in the Service of Man noted the attacks against human rights organisations.

“Within the context of this campaign, Al Mezan’s staff have endured death threats and intimidation, hacked emails, movement restrictions and deportation, defamation and incitement, harassment on UN premises, and other acts of reprisal.”

The silencing of civil society organsations (CSOs) by Israeli occupation took place at the United Nations. On 1st October 2020, Israel attempted to silence civil society groups at the UNHRC for condemning its imposition of apartheid on the Palestinian people. Taking the floor through a point of order to interrupt a joint statement by human rights groups, Israel accused NGOs of inappropriate language that contradicts UN standards. In response to this attempt, Nada Awad, International Advocacy Officer of the Cairo Institute for Human Rights Studies stated:

“Israel’s attempt to stifle freedom of expression on this issue will not change the facts – Israel’s policies toward the Palestinian people clearly meet the legal definition of apartheid and should be treated as such by the United Nations and its Member States.”

This attempt comes as a global letter signed by 452 civil society groups worldwide, as part of a global campaign, called on the UN to take responsibility for investigating and eradicating Israeli apartheid. In the letter CSOs called on the UN and all its member states to launch international investigations into Israel’s apartheid regime over the Palestinian people as well as associated state and individual criminal responsibility, through reconstituting the UN Special Committee against Apartheid and the UN Centre Against Apartheid to end apartheid in the 21st century.

#Israel maintains a coercive environment through excessive use of force, disregard of #Palestinian life, and denial of access to health care, perpetuating its #apartheid regime #UNInvestigateApartheid #EndImpunity #UNGA pic.twitter.com/aerFkYG0q0

In addition, Israel’s judicial harassment of human rights defenders (HRDs) continue to take place. On 3rd September 2020, Salah Hamouri, a Franco-Palestinian lawyer who works with Addameer Prisoner Support and Human Rights Association (Addameer) in the Occupied Palestinian Territory was summoned and given a letter informing him that his permanent residence card in Jerusalem was being revoked based on his “hostile activities against the state of Israel”. In a statement issued, the Observatory for the Protection of Human Rights Defenders (HRDs), a partnership of the International Federation for Human Rights (FIDH) and the World Organisation Against Torture (OMCT), noted that Hamouri has been harassed for years and was arbitrarily detained several times by Israeli authorities because of his peaceful human rights activities.

On 30th September 2020, Palestinian and regional organisations sent a joint appeal to the UN Special Procedures on the imminent risk of forcible transfer or deportation of Hamouri. The letter also addressed six UN Special Rapporteurs, including the Special Rapporteur on the situation of human rights in the Palestinian territory, requesting urgent intervention.

We call on @UN_SPExperts to urge #Israel to immediately cease all practices intended to intimidate & silence HRDs, in violation of their right to #FreedomOfExpression, including arbitrary detention, residency revocation, deportations.#SalahHamourihttps://t.co/TNIgLDU3zU

In a separate development, Amnesty International called on Israeli authorities to release Palestinian human rights defender (HRD) Mahmoud Nawajaa, the General Coordinator of the Boycott, Divestment and Sanctions movement (BDS) in Palestine. On 30th July 2020, at around 3.30am, Israeli forces raided Nawajaa’s home in the city of Ramallah in the occupied West Bank and arrested him. His wife reports that no reasons were given by the Israeli forces for her husband’s arrest. Nawajaa has been denied access to a lawyer or contact with his family since the arrest. On 2nd August 2020 Nawajaa’s detention was extended by 15 days. On appeal by his lawyer, his sentence was reduced to eight days. On 17th August 2020, Nawajaa was released.

Tens of Israeli soldiers, with dogs, stormed our home, terrifying our three children.
They took me blindfolded and handcuffed to a military interrogation center near Haifa. I wish I could visit beautiful Palestinian Haifa under different circumstances!

“They cannot break us because they cannot crush an idea or counter our strategy, despite all the financial, intelligence, political, diplomatic & propaganda resources they’ve invested,” Nawajaa said. #FreeMahmoud https://t.co/WriBLD4gLN

Many of the protests which took place during the reporting period were due to the normalisation agreements signed between the United Arab Emirates (UAE) and Bahrain and the Israeli occupation forces. Palestinians protested in several cities including Nablus, Jenin, Tulkarm and Hebron holding signs that denounced the agreements and the Arab normalisation of relations with Israel.

The Arab NGO Network for Development (ANND) issued a statement noting that the continuation of normalisation steps and the signing of peace accords with the Israeli occupation state heralds the disintegration of the Arab position concerning the Palestinian cause. ANND condemned the normalisation agreements, specifically when the occupation has been persistently implementing its aggressive policies against the Palestinian people who have been besieged in the Gaza Strip. It called on all Arab CSOs to reject these deals and boycott the occupation on all levels while increasing their solidarity with the Palestinian people and supporting their resilience against the occupation.

Despite COVID-19 and its impact on public activities, there has been an increase in violations against journalists and media outlets while covering Palestinian activities. The Palestinian Center for Development & Media Freedoms “MADA” documented a total of 31 violations in September 2020 compared to only 11 documented during August 2020. This is in addition to the increase in the number of Palestinian violations that took place in the West Bank and Gaza Strip. The cases documented include:

On 30th September, the Palestinian Centre for Human Rights (PCHR) issued a press release to condemn the confiscation of a Palestine TV vehicle by Israeli security forces (see above) under the pretext that the crew was in a closed military zone in the Jordan Valley, east of Tubas. PCHR stated this was a continuation of a "systematic policy against press crews, and Palestinian and international media agencies operating in the OPT.”

In addition to the above cases, the Committee to Protect Journalists (CPJ) expressed concern about the arrest of Palestinian freelance journalist Tareq Abu Zeid by Israeli security forces. On 1st October 2020 security forces raided Abu Zeid’s home, seizing his cell phone and computer, and arresting him. On 4th October 2020 Abu Zeid’s detention was extended for nine days.

“We condemn the Israeli authorities’ habit of arresting journalists without informing them of the reasons. Authorities should either disclose the charges against Tareq Abu Zeid or release him immediately,” - CPJ’s Middle East and North Africa representative, Ignacio Miguel Delgado.

In relation to freedom of speech, access to information is closely monitored by CSOs in Palestine as well. New research by The Arab Center for the Advancement of Social Media (7amleh) documented that 72 per cent of Palestinians have been exposed to fake news and that the Israeli authorities are the main source of fake news, contributing to 54 per cent. The study also reveals that the problem of fake news is on the rise during the COVID-19 crisis.

On 28th September 2020, the International Day for the Right to Access Information, "MADA" called for the adoption of the Law on the Right to Access Information. The study by MADA noted that 57% of journalists have not seen any of the draft laws on the right to access information that were proposed and have been under discussion for years. While access to information is key for civil society engagement, another study by PNGO revealed that during the COVID-19 crisis, social media constituted a large area of influence and dominated the news, especially in relation to false and fabricated information, which had an impact on the information obtained by the general public.