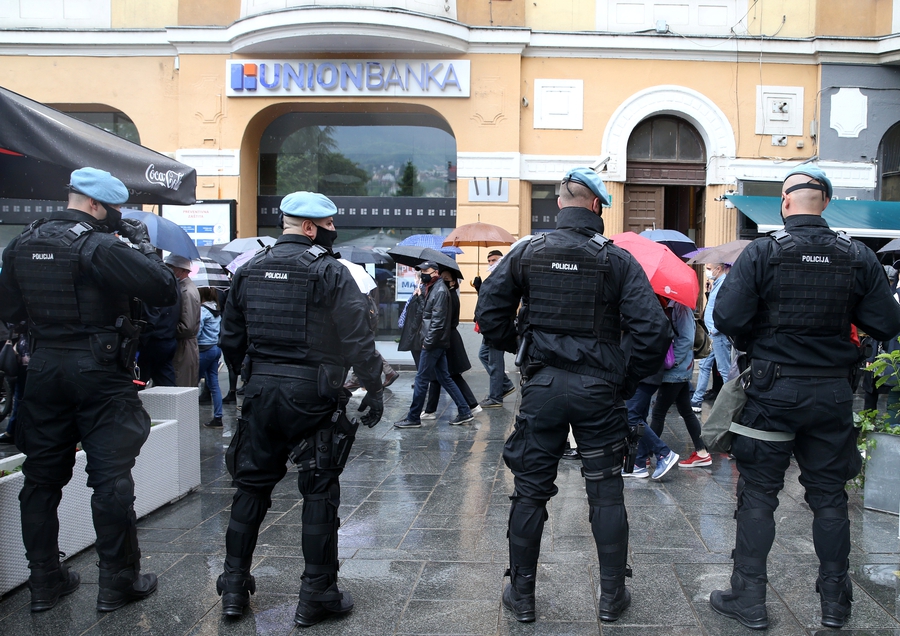 Police at a protest by the newly formed political party “Platform for Change" (REUTERS/Dado Ruvic via Gallo Images).

During Bosnia and Herzegovina's (BiH) first Pride Parade in 2019, significant additional costs of securing the parade were imposed on the organisers but were not sought from other similar gatherings in 2019 and 2020, according to an analysis by the Balkan Research Network of Bosnia and Herzegovina (BIRN BiH). According to organisers, regional activists and analysts, such conditions place LGBTI rights activists in an unequal position in BiH.

"...We were in a situation where, if we do not provide all the additional security measures, we find ourselves in a position where the police can claim that all the legal conditions for holding a rally have not been met and that this de facto means that the announced rally cannot take place,” Emina Bošnjak, Organising Committee of BiH Pride parades and the executive director of the Sarajevo Open Centre.

In a separate development, activists, journalists and lawyers expressed concerns about the inconsistent actions of the police towards the citizens of Banja Luka because of the different attitude towards unannounced rallies and the reasons for the gatherings. They cite the gathering of “Justice for David” activists as an example, where police officers lay misdemeanor charges (see previous update), while it seems that the organisers of several other unreported rallies have not been punished. For example, in Banja Luka, in addition to the gathering of the group "Justice for David", another public gathering was also held. Members of "Ujedinjene Srpske" gathered and distributed educational material related to the coronavirus. However, they were not approached by the police, while the members of “Justice for David” were on several occasions.

"It is noticeable that certain groups are 'more equal' before the regulations in relation to others, i.e. that there are 'forbidden' groups or signs, although there are no moral, nor normative, nor real reasons for such obvious discrimination...In Banja Luka you can celebrate the fall of the regime in another country, the victory of a beloved club that you can't watch in the stands of the stadium, but you can't ask who killed David Dragicevic because in that case you will get a misdemeanor warrant,”- lawyer Milan Malešević (translated from Bosnian).

Other protests recorded during this period include:

#Bosnia: Another journalist threatened with death and confronted with hate speech. #CFWIJ calls upon relevant authorities to investigate and prosecute the people responsible for threats against Jelena Desic.

Journalist Jelena Desic, a correspondent of the Srna agency from Drvar, was brutally threatened for reporting on waste storage in the municipalities of Drvar and Bosansko Grahovo. Following her reports on the problem of waste from Italy being dumped in these municipalities, Desic received a series of death threats via Facebook. She was threatened with “hanging” and “burning on a bonfire”. These threats, along with numerous other insulting comments, were published on the Facebook page of the Socialist Party from Drvar. The Steering Committee of BH Journalists and the Free Media Help Line demanded that the Ministry of Internal Affairs of Livno Canton and the police station in Drvar urgently investigate the threats against the journalist and prosecute those responsible in accordance with the law. In a statement the association said:

“We emphasise once again that such actions towards journalists, especially when they are indirectly initiated by political parties and their officials, are inadmissible and contrary to democratic and European values, and seriously jeopardise media freedom and the safety of journalists.”

In addition, the Coalition for Women in Journalism also demanded urgent action concerning the increase in threats against journalists via social media.

“Such threats are contrary to democratic values and seriously jeopardise press freedom and the safety of journalists.”