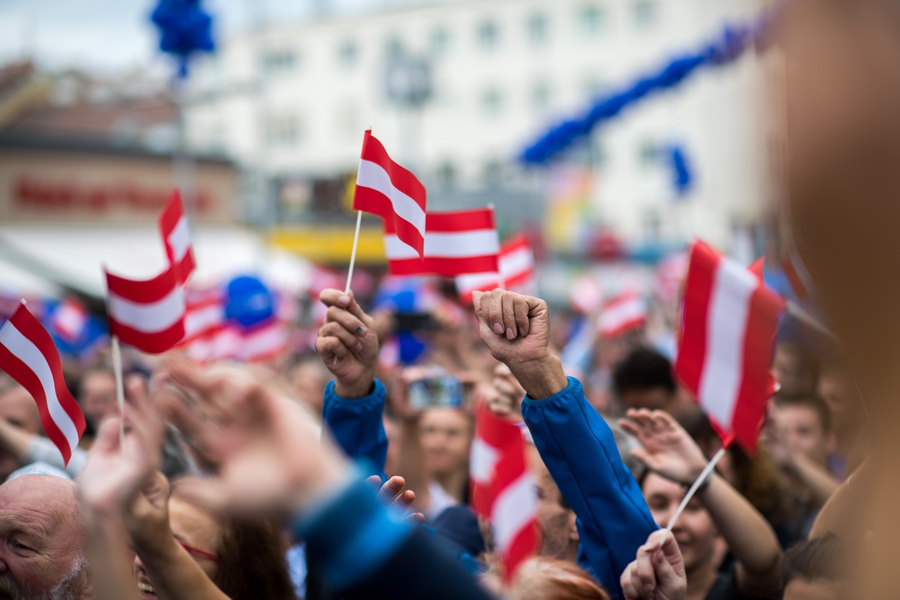 Citizens attending a political rally prior to the September 2019 elections (Photo by Michael Gruber/Getty Images).

Political gains made by the Green party and increasing dialogue between government and civil society has led to an improvement in civic space in Austria, prompting a ratings upgrade from narrowed to open. This ratings decision by the CIVICUS Monitor was taken following a thorough assessment of conditions in the country for the free exercise of civic freedoms, as protected by international law.

In 2018 under the ÖVP-FPÖ (Peoples Party - Freedom Party Austria) coalition government, Austria was downgraded to narrow following a deterioration in civic space. During this period, the government refused to engage with civil society organisations (CSOs) but instead pursued smear campaigns against them. In addition, funding to NGOs in many sectors was also drastically reduced. More specifically, NGOs working with migrant and refugee rights were labelled as ‘human traffickers’ by Chancellor Sebastian Kurz. Freedom of expression came under threat as government officials attempted to prevent independent media from reporting on certain briefings and subjected them to online attacks.

However, the September 2019 election outcome has resulted in a positive change, as the far-right FPÖ party was replaced in the coalition by the Green party. The Green party has been more open to dialogue with CSOs, which presents the sector with the unique opportunity to make themselves heard again, as described in more detail below.

Financial support to the civil society sector during the pandemic

Austria has been the only European country, together with Ireland, to introduce a special grant package for CSOs during the pandemic. Since early July 2020 non-profit organisations (NPOs) are entitled to demand compensation for income losses due to the pandemic, through a 700 million Euro fund, set up exclusively for NPOs. From the beginning of the pandemic in March 2020, the main NPO platform in Austria, "Bündnis für Gemeinnützigkeit" (Alliance for Public Benefit), was heavily involved and regularly consulted during impact assessments and the creation of the fund.

CSOs, fire brigades, churches and other religious organisations as well as organisations owned by them may apply for cost recovery, with a cap of 2,4 million Euro or the total amount of income loss compared to 2019. CSOs in the cultural and economic sectors depending on such funding have access to additional emergency funds. Some provinces have also announced additional measures to support CSOs, especially targeting the volunteer sector.

After two years of largely being ignored by the government, CSOs are starting to be heard by Austrian authorities. When the extreme-right party FPÖ was replaced by the Green party in a coalition with the ÖVP party in October 2019 it gave CSOs the unique opportunity to improve the relationship between civil society and government.

The Interest Group of Public Benefit Organisations (IGO) reported that some flagship projects, such as the implementation of a national satellite account for national statistics of the third sector and the joint evaluation of volunteer legislation as a test case for (digital) participation, are now being discussed with the new coalition between conservatives and greens.

Close relations between government and the Red Cross criticised

While the above positive developments are much welcomed, some rescue organisations report feeling excluded by the coronavirus crisis management. The government allocated funding and health equipment to manage this emergency exclusively to the Red Cross, as if it were the only recognised civil society body.

The lack of transparency and the historical relations between the Red Cross and Prime Minister Sebastian Kurz’s ÖVP party is a cause for great concern. The president of the Red Cross, Gerald Schöpfer, was previously an ÖVP politician and state councillor and many party members were formerly part of the Red Cross.

Following mass protests against racism in the US after the death of George Floyd, a Black man, by a Minneapolis police officer, Black Lives Matter protests have spread across the globe, including in Austria. After many years, the largest demonstration in Austria took place on 4th June 2020. A mass protest for #BlackLivesMatter brought 50,000 people to the streets in Vienna. As it was the first big meeting since the outbreak of the pandemic, there were many doubts about health and safety guarantees.

Following this, the government decided to call a round table with health authorities and protest organisers to find a solution. Three points emerged by consensus from the round table:

Since the end of March 2020, a wave of numerous warnings, requests for justification, criminal orders and fines have been circulating throughout the country. According to Dr Gregor Klammer, a lawyer at the Austrian Lawyers' Office, some of the allegations were quite strange and incomprehensible. In Vienna, in particular, the fines have been extremely high, around 500 Euros, and more than 3,300 administrative criminal proceedings have been appealed in June 2020. A large part of the regulations which restrict freedom of movement during the pandemic has already been revoked by the Constitutional Court, thus making most of the fines invalid.

Reporters Without Borders (RSF) Austria warns that a new Austrian bill to combat hate speech on social media and online platforms, which was presented on 3rd September 2020 in Vienna, should not repeat the same mistakes made by the German federal government with its controversial German Network Enforcement Act (NetzDG). The bill makes provision for a 'fast- track procedure' where users who are subjected to hate seech online can request the deletion of such content.

“We welcome the initiative's objective of better protecting people in the digital space from hate speech. Media professionals are particularly exposed to this phenomenon. At the same time, despite some positive adjustments, the law pursues similarly problematic approaches as those already adopted in France and Germany and could also lead to restrictions on freedom of expression and freedom of the press in these countries," - Rubina Möhring, President of Reporters without Borders (RSF) Austria.

However, RSF notes that the bill must consider the risk of 'overblocking' social media patforms and make provision for users to appeal decisions through an independent body.

"It is crucial that platforms will no longer be able to delete contributions without explanation. The right to freedom of information must be safeguarded," -Rubina Möhring President of Reporters without Borders (RSF) Austria.