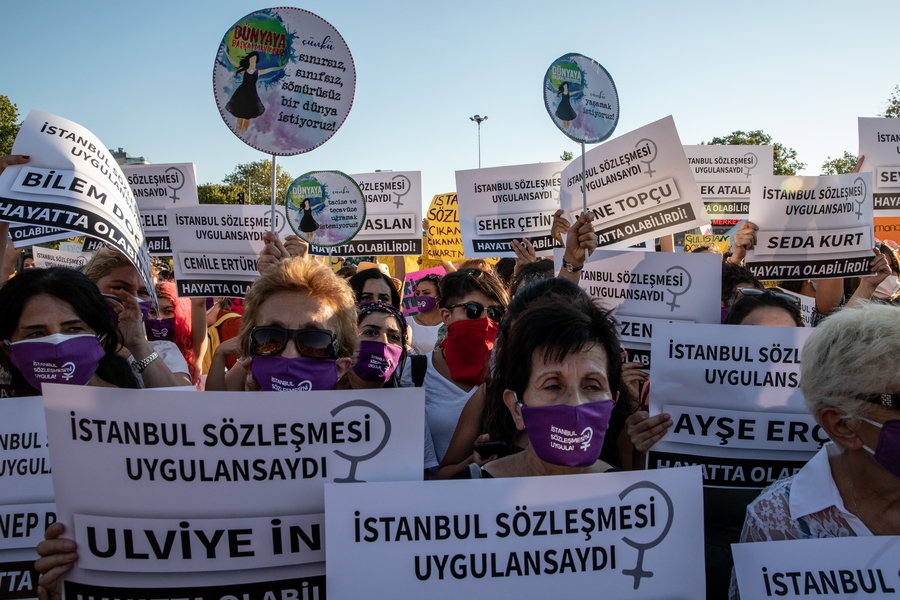 The Constitutional Court has ruled in favour of protecting freedom of association in the case of Hakan Yılmazöz, a student who was convicted by a local court of "being a member of a terrorist organisation". The conviction was related to his participation in an event organised by an association. The Constitutional Court stated that in this case Yılmazöz’sright of association was violated and that "taking part in the event of an association cannot be cited as criminal evidence for membership of a terrorist organisation."

In a separate development, according to the Homophobia and Transphobia Based Hate Crimes Report 2019 issued by the Kaos GL Association, many attacks on LGBTI+ people occur in public spaces and are carried out by multiple perpetrators. However, very few of the victims (in 26 incidents out of 150) have reported the attacks due to the perception that “the police are careless”, they “do not believe that reporting will work", "not wanting to be subjected to discrimination by the police”, or they want "to avoid being exposed to the family or media". As a possible recommendation, it is pointed out that hate crime legislation needs to be adopted. It is important to mention that according to ILGA Rainbow Europe 2020, Turkey has ranked at the bottom of the Rainbow Europe scale together with Azerbaijan and Armenia.

There have been recent debates about the Turkish government's intention to withdraw from what is commonly known as İstanbul Convention, formally the Convention on Preventing and Combating Violence Against Women and Domestic Violence.

Former President of the Group of Experts on Action against Violence against Women and Domestic Violence (GREVIO), Professor Feride Acar, states that this decision is related to Turkey’s “inability to accept gender equality”. She states that this move could also taint Turkey’s reputation in the international community and especially before the Council of Europe and its Human Rights Commissioner. This news comes at a time when Turkey faces even more violence against women due to the COVID-19 pandemic. Namely, digital violence as a form of harassment against women has become more present. For instance, there was a recent case of public officials revealing the locations of women's shelters, which has led to further distrust in institutions.

Speaking to the CIVICUS Monitor on the recent developments in Turkey, Elif Ege from Mor Çatı, a civil society organisation founded by Turkish feminists 30 years ago to fight violence against women, says that the situation of gender rights has deteriorated.

“The convention tries to prevent gender-based violence on the basis of gender equality, recognising women as equal citizens. The groups and parties that suggest withdrawing from the Convention say that we can create our own domestic laws. But the Convention itself was already created by the efforts of feminists from Turkey. If we withdraw from this Convention, it means that we do not believe in gender equality.”

Amnesty International states that a withdrawal from the Istanbul Convention will have dire consequences for women and girls in Turkey.

“There is a bitter irony to the fact that the Turkish authorities are considering withdrawing from a Convention bearing the name of its most iconic city. This discussion is deeply worrying, coming at time when COVID-19 measures, such as lockdown, have led to a spike in reports of violence against women and girls with many women and girls trapped at home with their abusers or unable to easily access safety and support services.”- Amnesty International’s Women’s Rights Researcher, Anna Błuś.

There is a bitter irony to the fact that the Turkish authorities are considering withdrawing from a Convention bearing the name of its most iconic city. Turkey should take immediate action to better protect & promote the rights of women and girls. https://t.co/1aohVbg99O

Human Rights Watch (HRW) has condemned the conviction of four Human Rights Defenders (HRDs) on 3rd July 2020. Eleven HRDS were on trial on charges that they were connected to several outlawed organisations. The following sentences were handed down:

“In three years, the police and prosecutors have produced not a shred of evidence of criminal activity by any of the 11 rights defenders who stood trial. Four have been convicted for their legitimate human rights work in another trial which demonstrates how any independence in Turkey’s justice system has collapsed under political pressure.”- Hugh Williamson, Europe and Central Asia director at Human Rights Watch.

Outrageous verdict at the #Buyukada trial - four of the 11 defenders see convictions in a case that should never have been brought.

This is a shameful day and a verdict that even with a cursory knowledge of the case, can only be described as a travesty of justice. pic.twitter.com/NrXDx7PSiP

The followings protests took place during the reporting period:

“This threat has been in Turkey for decades. It is not a current issue. I think that the violence, which has especially increased in the recent period, is closely related with the statements of the politicians.”- Ali Yıldırım from the İstanbul LGBTI+ Pride Week Committee.

"Women will not forgive violence"

In #Turkey, thousands of women have taken to the streets of several cities to protest against gender-based violence & demand the country remain a signatory to @CoE's #IstanbulConvention https://t.co/3JQJrczk2N

Amid the COVID-19 pandemic, authorities in Turkey have made use of criminal law provisions to target people who critically discuss the pandemic online. This observation was made by Amnesty International (AI), according to which a total of 1,105 social media users were targeted by the authorities in the last 65 days for being involved in propaganda for a terrorist organisation that included “sharing provocative Coronavirus posts.” Five hundred of these users were reportedly detained and questioned.

In relation to this, it is important to mention that according to a monitoring study (Turkey Free Expression Trial Monitoring Report) by the Media and Law Studies Association (MLSA) and the International Press Institute (IPI), the majority of the convictions of journalists in Turkey emanated from their work publications. This indicates that the Turkish judiciary is often prone to linking journalism with terrorism. The report states:

“On a global scale, Turkey still has one of the highest number of journalists in prison. The violation of the right to fair trial continues, as well as the judges’ unconstitutional practices which are also in contradiction with international legal standards.”

92 journalists & media employees welcome #Eid behind bars in #Turkey, apart from loved ones. Prisons are reporting #COVID19 deaths; precautions are insufficient. Journalists who are imprisoned for practicing their profession must be released!

A report (Blocked Web 2019 – Unseen part of the Iceberg) published by the Freedom of Expression Association (İFÖD), found that Turkey made the highest number of applications to Twitter for content removal in 2019. Furthermore, the Turkish courts banned access to around 130,000 URL addresses, 7,000 Twitter accounts, 40,000 tweets, 10,000 YouTube videos and 6,200 Facebook posts in 2019.

The practice of suspending broadcasts of pro-opposition outlets has continued, with the TV station TELE1 and Halk TV being suspended from broadcasting for five days in July 2020. The decision was condemned by the International Press Institute (IPI), a global network of editors, media executives and leading journalists for press freedom. The Committee to Protect Journalists also condemned such censorship:

“The Radio and Television Supreme Council should not function as a censorship tool for the government, and Turkey should learn to tolerate the existence of whatever critical voices are left in the broadcast media.” - CPJ Europe and Central Asia Program Coordinator Gulnoza Said, in New York.

As previously reported on the Monitor, President Erdogan has stated that his party will draft a bill to “either completely ban or control social media”, which poses a further threat to the freedom of expression in the country. Following this statement, the Justice and Development Party (AKP) submitted an official law proposal on social media to parliament, which passed the social media bill in late July 2020. According to the bill, social media companies will be obliged to have a representative and "encouraged to store users' data" in Turkey. Furthermore, social media companies will be obliged to have an office in Turkey and their representatives will be held accountable in legal affairs. Companies which refuse to open an office will be penalised with bandwidth restrictions of up to 90 percent.

What has changed in #Turkey's internet law?👇 pic.twitter.com/OxH8gN3u3U

Reporters Without Borders condemned the amendments to the law, stating that such a law will only further stifle free expression.

“After being politically weakened, it is deplorable that the sole response President Erdogan has found is to nationalise the management of international digital platforms in order to silence the fierce criticism he has been receiving on the Internet – the only refuge left for outspoken journalists.” - RSF Turkey representative Erol Onderoglu.