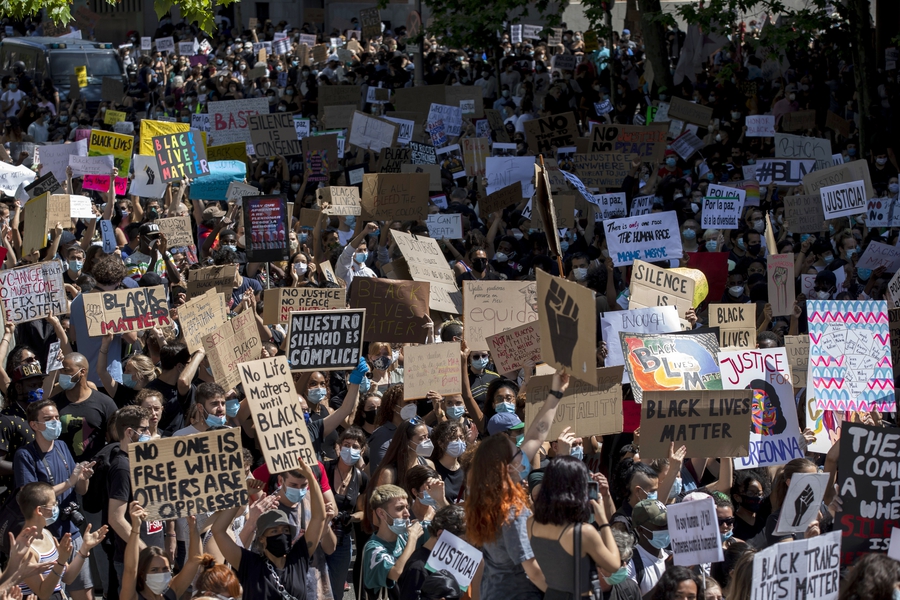 Catalan independence campaigners are suspected to have been targeted by government services using spyware, which is allegedly only sold to governments for the purpose of surveilling criminals and terrorists.

It is believed that in the spring of 2019 a total of 1,400 users were targeted on WhatsApp by a surveillance software called “Pegasus”, sold by the Israeli NSO Group Technologies to government agencies. The messaging app suspects that over 100 individuals from the civil society sector, including journalists and human rights activists, have been affected. WhatsApp has launched a lawsuit against the NSO Group in the US, whose clients have included the governments of Saudi Arabia and Mexico. However, it was only recently discovered that the spyware was also used by a European state.

According to a joint investigation by the Guardian and El País, at least five members of the Catalan independence movement, including the speaker of the Catalan regional parliament, Roger Torrent, were targeted by what is a “possible case of domestic political espionage”.

In an interview to the Guardian, Torrent said that he expects that the Spanish state is behind the hacking attempts.

“It seems wrong that politicians are being spied on in a democracy with the rule of law....It also seems to me to be immoral for a huge amount of public money to be spent on buying software that can be used as a tool for the persecution of political dissidents.”

The Spanish government has denied all allegations of spying on its citizens. Nevertheless, there have been calls for a parliamentary investigation and two of the alleged victims who were spied on announced that they will be taking legal action against Félix Sanz Roldán, the Director of Spain’s National Intelligence Centre (CNI) at the time of the assumed hackings.

Who has been using spyware on Catalan independence campaigners? https://t.co/E4HCIXjZL2

It has been five years since the controversial Citizen Safety Law, more popularly known as the “Gag Law”, was first approved by Spain’s Popular Party (PP) in 2015. Since it was introduced the law has been criticised for impeding freedom of peaceful assembly and freedom of expression, as it imposes restrictions on the right to peaceful gatherings and journalists’ right to cover protests.

On the Gag Law’s fifth anniversary, numerous NGOs and human rights groups have called for it to be revised. Amnesty International Spain, along with other organisations, including Rights International Spain (RIS), have released a manifesto, urging the Spanish government to reform the Citizen Safety Law. The manifesto has already been signed by 270 independent organisations. The manifesto declares that:

“Each year that has passed with the Gag Law in force we have recalled the urgent need to reform it, to have in place new legislation in line with international human rights standards. […] We will ensure that once and for all this fifth birthday of the Gag Law is truly the last.” (Translated from Spanish)

Despite Prime Minister Pedro Sánchez’s claims to have reformed the Citizen Safety Law in 2018, a record number of fines have been issued during the lockdown period between March and June 2020 in the name of the law. Within the first 75 days of the coronavirus lockdown, a total of 1,089,917 proposed fines of up to €30,000 were issued for violation of confinement measures.

Although Interior Minister Fernando Grande-Marlaska has expressed government’s intention to repeal the Gag Law, he also stated that “there are sections that will always have to be included in the next law”, referring to Section 36.6, the section that sets fines up to €30,000 for disobeying law enforcement officers.

“For the past 5 years, MPs have been thinking about how to reform the Gag Law. It is time now that they take a real decision. The Gag Law should have never been approved. RIS has been saying this for the past five years. It is now urgent to adapt the law to international standards, removing provisions that violate fundamental rights and verifying that all its provisions completely respect legal certainty and the principle of legality.”

Right to protest during pandemic under debate

Annual May Day demonstrations have sparked further concern over the state of freedom of assembly in Spain. Under the state of alarm, which was declared on 14th March 2020 and lasted until 21st June 2020, Spanish authorities lacked uniformity on the enforcement of regulations for peaceful assembly. Despite the Government Delegation issuing a ban on large gatherings, the Supreme Court of Justice of Aragón (TSJA) authorised a “caravan-demonstration" in Zaragoza on Labour Day. However, a similar May Day protest in Vigo was prohibited by the Supreme Court.

This last case was taken all the way to the Constitutional Court (CC), who argued that although the state of alarm does not allow the complete suspension of any fundamental rights, it does permit certain limitations and restrictions. Moreover, the Prosecutor General’s Office (PGO) released a statement regarding the same matter. The report echoed the Constitutional Court’s ruling, reasoning that the right to life overrules freedom of assembly in the case of the coronavirus pandemic. Nevertheless, Pedro Crespo, district attorney for the Contentious-Administrative order, who prepared the report, emphasised that the state of alarm "does not constitute an adequate and sufficient legal justification" to prohibit demonstrations. The report highlights that neither the bill on which the state of alarm was agreed on, nor its successive extension provisions “make any mention of the suspension, restriction or limitation of the fundamental right of assembly and demonstration,” recognised by Article 21 of the Spanish constitution.

In a separate development, a series of caravan-demonstrations was organised by the far-right Vox party in several Spanish cities, including the capital, Madrid. Several spontaneous protests were also held in the capital’s conservative neighbourhood, Barrio de Salamanca, to express dissatisfaction with the government’s handling of the coronavirus pandemic. According to Vox supporters, the demonstrations were shut down for political reasons. However, local police have tweeted video footage of an event in Madrid, claiming that non-socially distanced street parties, which go against coronavirus health regulations, triggered the involvement of state authorities.

On 7th June 2020 thousands gathered in Madrid and Barcelona for a Black Lives Matter protest, following mass protests against racism in the US, after the death of George Floyd, a Black man, by a Minneapolis police officer. The Madrid protest, which was organised by Black African Community and Afro-descendant in Spain (CNAAE), took place with a large police presence. While the government had authorised a protest of 200 people, large numbers of people turned up for the anti-racism demonstrations, making social distancing impossible.

During May and June 2020 health workers protested over the lack of personal protective equipment (PPE), their working conditions and job security. On 29 June 2020 in Madrid Puerta del Sol Square health workers staged a socially distanced protest wearing masks and holding banners stating “Who will look after the people who look after you?”

VIDEO: Healthcare workers gather outside the Gregorio Marañon hospital in Madrid to protest against shortages during the coronavirus crisis and improvement of working conditions pic.twitter.com/9QbbNOumE2

During the state of alarm, the physical presence of journalists was prohibited at press conferences. Although this has been a common procedure in many countries to prevent the spread of COVID-19, media professionals have criticised the Spanish government for filtering questions during telematic appearances.

Despite regular televised press conferences, journalists’ questions to state officials are often left unanswered. Journalists are expected to send their questions to a WhatsApp group (with over 220 participants), of which only a few are selected for answering by the Secretary of State for Communication, Miguel Ángel Oliver.

The Sánchez administration has been accused by many of lacking transparency in its handling of press conferences. Nemesio Rodríguez, president of the Federation of Journalists Associations of Spain (FAPE) told El País:

"We don't like the system. The accountability to which governments are obliged loses the necessary transparency if journalists cannot ask and cross-examine directly.” (Translated from Spanish).

After much criticism by professionals and an open letter entitled “The Freedom to Ask”, with 400 signatures, journalists could finally pose their questions without intermediaries on 6th April.

In a separate development, Reporters Without Borders (RSF) has published an article urging digital platforms to protect journalists from harassment when covering coronavirus related news. The article directs special attention to Spain, where the far-right Vox party has “stepped up its online harassment of critical journalists”, according to RSF.

“It is very alarming to see politicians fomenting online hatred against journalists just because they are not covering the COVID-19 crisis as the politicians would like. The resulting online hate campaigns pose a serious threat to the safety of journalists and to democracies themselves. This unprecedented pandemic is a unique opportunity to resolve a systemic problem on online platforms. Aside from the COVID-19 crisis, the platforms must commit to greater transparency in the way they moderate content and what they do to combat harassment of journalists.”- RSF secretary-general Christophe Deloire.

In a separate but related development, journalists were attacked and harassed during protests against the Sánchez government’s handling of the COVID-19 pandemic. For instance, Gabriel López, a reporter for the TVE television channel, was prevented from delivering a report due to Vox supporters’ deliberate honking and shouting. The protesters also verbally attacked López and his cameraman, shouting insults such as “faggots, communists, you must tell the truth”.

In another incident during the Madrid protest, a photographer for the newspaper La Razón was also assaulted by several people. A police complaint was filed. At a far-right protest in Ceuta (a Spanish enclave on the North African coast whose city hall is controlled by the right-wing People’s Party (PP), journalists report being subjected to racist and Islamaphobic insults.

Furthermore, Vox has been boycotting certain media outlets by banning them from Vox events.

RSF has repeatedly called on Vox to cease their attacks against the press. Alfonso Armada, Director of RSF Spain stated that:

“It’s an act of the utmost cynicism typical of extremist groups to say they condemn attacks against the press and blame them on ‘the enemy,’ when it is the hatred of the media that Vox constantly stokes which is behind this violence, […] Vox does not need to publicly assume its responsibility. We do it for them.”