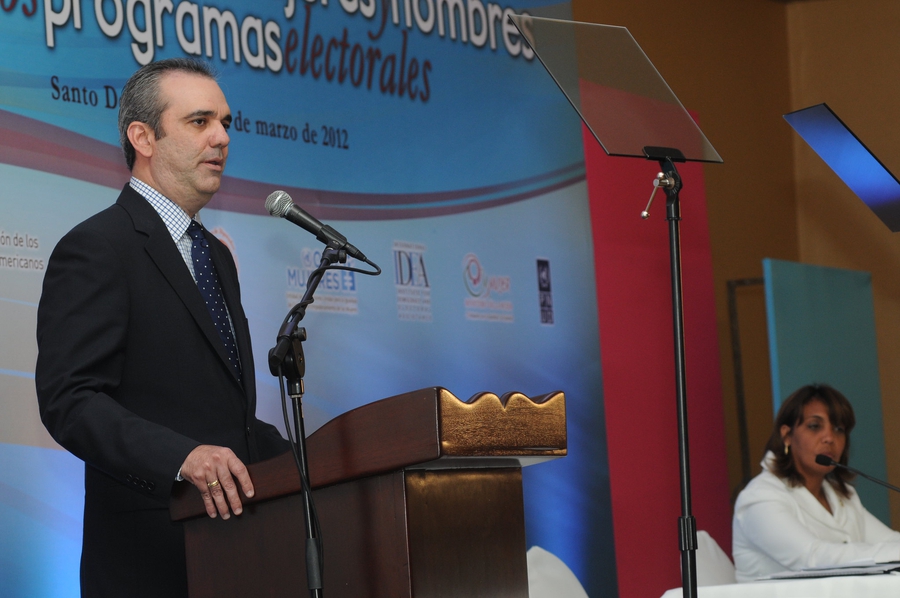 President-elect Luis Abinader speaking at an event in 2012. Photo by Inter-American Commission on Women (CC BY-NC-ND 2.0).

Opposition candidate Luís Abinader was elected president of the Dominican Republic on 5th July 2020, ousting the Dominican Liberation Party after 16 years in power. These were the first presidential elections held in the region since the beginning of the COVID-19 pandemic.

The Dominican Central Electoral Council had postponed the elections originally scheduled for May 2020 to limit the risks of coronavirus spread, and a sanitary protocol was developed to hold the voting process in July. Measures included distancing in the queues, obligatory mask and glove use and sterilisation of polling stations. Voter turnout was lower than usual, with 55.29 percent of registered voters participating compared to an average of 70.40 percent in the past three presidential elections.

At the end of July, CIVICUS spoke about the recent elections in the Dominican Republic with Hamilk Chahin, coordinator of the Citizen Manifesto for Electoral Transparency, and Addys Then Marte, executive director of Alianza ONG. Read the interview.

In solidarity with Black Lives Matter protesters in the United States, Dominican groups organised a demonstration in honour of George Floyd in Santo Domingo on 9th June 2020. The vigil, called "A flower for Floyd and against racism", was convened by Reconocido, a local movement that promotes citizenship rights and equality for Dominicans of Haitian descent, as well as other movements linked to Black culture and Afro-descendants, such as Acción Afro-Dominicana (Afro-Dominican Action).

The demonstrators were met with counter-protesters from the country’s nationalist movement. In the days preceding the protest, members of ultra-nationalist group Antigua Orden Dominicana (Old Dominican Order) had used social networks to call on supporters to "defend against the Haitian invasion" in a demonstration on the same day. Reconocido and its leader Ana María Belique received threats and were targeted by an online smear campaign led by people believed to be associated with the xenophobic group.

According to Belique, members of the nationalist group attacked the anti-racism protesters and the police intervened to disperse rather than protect peaceful demonstrators. Officers snatched materials such as posters and flowers from the protesters, also detaining Belique and activists Maribel Nuñez and Fernando Corona. Nuñez reported that police officers used physical force and made verbal attacks against them during the incident. The National Police told media the detentions took place because protesters infringed social distancing protocols, however organisers noted that the nationalist demonstration was allowed to go on for two hours without police intervention.

The Dominican Republic shares the island of Hispaniola with Haiti and has a conflicted history with the neighbouring country. In 2013, a decision on citizenship rights by the country’s Constitutional Court arbitrarily deprived hundreds of thousands of Haitian descendants of their Dominican nationality, leading to the most significant statelessness crisis in the region.