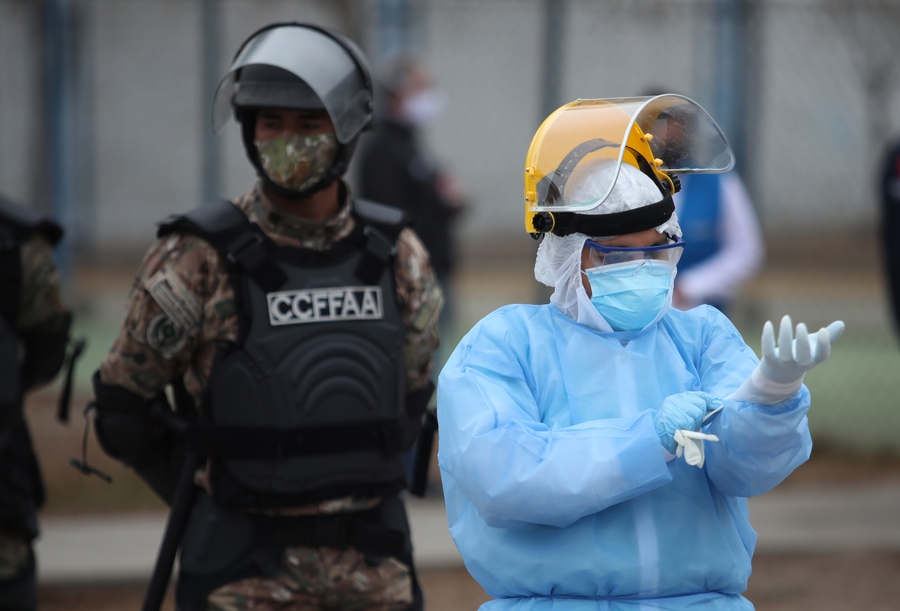 On 15th March 2020, Peru’s government issued a decree declaring a state of emergency on account of the coronavirus (COVID-19) pandemic. The decree suspended individual constitutional rights, including rights to peaceful assembly and freedom of movement, and the requirement that the government must have a warrant before conducting arrests. While Peru imposed one of the earliest and strictest lockdowns in Latin America, the country was still hard hit by the pandemic.

Legislation to protect police officers enables excessive use of force

A new law in Peru grants police special legal protections when they injure or kill. Instead of building a police force that is accountable and effective in the fight against crime, the law spurs the use of excessive force and impunity for abuses.https://t.co/kTGwsnbAH2

On 27th March 2020, the Peruvian Congress enacted the Police Protection Law (No. 31012) which modified the country’s penal code to exempt officers and soldiers from criminal responsibility for deaths or injuries caused while “fulfilling their constitutional duty”. The modified legislation revoked legal requirements establishing that the use of force by police must be proportionate. Local and international organisations have criticised the law, saying it enables police abuses and may contribute to impunity for serious human rights violations. Local experts also highlighted that the bill was elaborated by a previous Congress but had not been enacted, and it is concerning that lawmakers decided to pick it up and approve it amid the COVID-19 pandemic.

The Office of the UN High Commissioner for Human Rights (OHCHR) called on the Peruvian government and legislators to review this law, as it does not comply with several international norms and standards of human rights law. The OHCHR South America Representative said, “it is a concerning setback in the legislation Peru had been developing in regard to the use of force”.

In June 2020, unionised workers in several cities carried out mobilisations and protests related to working conditions and the lack of jobs during the health emergency. On 23rd June 2020, construction unions organised a day of protest to push multiple labour demands. In Lima, police used tear gas to disperse the demonstrations and 50 protesters were detained. In Cusco, police also used tear gas against the hundreds of protesters who had gathered in a local avenue. At least six people were reportedly detained.

From April to June 2020, there were several protests organised by health sector workers demanding more protective equipment and safety measures for healthcare professionals during the pandemic. In addition, workers have demanded improved labour rights for the sector.

Mining workers also mobilised to express concerns and demand stronger protective measures as the sector began to resume operations in Peru. As reported by Reuters, many staged sit-in protests to push for more health measures. “Rapid tests aren’t reliable so we want molecular tests that give more accurate diagnosis,” union leader Jorge Juárez told the outlet. “Workers want to work, of course. We only ask for guarantees they can work in a safe environment.” Some mining companies were given permission to continue operating despite COVID-19 and at the end of April 2020, at least three people were detained at a protest in Arequipa requesting the temporary closure of activities due to virus outbreaks. In a press conference, Peru’s Minister of Energy and Mining said there were about 3,000 infections among workers from the mining sector by 29th June 2020.

Positive initiatives for the protection of human rights defenders

The new guidelines are meant to place the Ombudsman’s work in line with recommendations made by former UN Special Rapporteur on Human Rights Defenders, Michael Forst, following his visit to Peru in February 2020. In April 2019, the country’s Ministry of Justice and Human Rights also approved a Protocol to guarantee the protection of human rights defenders, establishing measures and procedures to ensure an enabling environment for defenders and human rights organisations. The protocol provided for the creation of the first official register for complaints of attacks against defenders.

On 21st April 2020, cartoonist Carlos Tovar Samanez, known as Carlín, received threatening messages and emails after publishing in a daily newspaper a cartoon satirising former Peruvian president Alan García, who committed suicide in 2019. In the image, he depicted the former president saying he planned to shoot someone and then kill himself, as he embraced his daughter. As reported by the Committee to Protect Journalists (CPJ), Tovar received an email saying, “This is the end of the line, Carlos Tovar,” and, “We are going to look for you and find you, and we will make you eat dust.” On social media, the cartoonist said he had received several threats. On 22nd April 2020, Salvador Heresi, a former justice minister, told him: “The threats against you are well-deserved even if they beat you up.”

On 28th March 2020, journalist Ralph Zapata was detained and released after an hour for alleged curfew violation in the city of Piura. According to local organisations, the journalist was in his home coordinating an edition of media OjoPúblico when a group of police agents forcibly detained him. The Ministry of Interior claimed the reporter had been speaking to neighbours on the kerb in front of his house but OjoPúblico contradicted this version with messages sent by the journalist to another editor, showing that he was working at the time of the arrest.

On 10th March 2020, two journalists were temporarily detained while working in Uchiza, Tocache province. As reported by Peru’s National Journalists Association (ANP), Roy López Vila with Radio Nycoll and Mario Yuri Gómez Príncipe with Radio Poder, who also run a social media news page, were covering a meeting organised by rural residents to coordinate COVID-19 response activities when law enforcement officers arrived. Despite showing their identification documents and telling the officers they were members of the press, the two journalists were taken to the police station and held for an hour. The ANP condemned police treatment of the reporters, calling it excessive.

In March 2020, a semi-annual press freedom report to the Inter American Press Association indicated that while legislative proposals to increase penalties for defamation remained stagnant, there was an increase in defamation-related lawsuits against journalists in Peru. In particular, these lawsuits were directed at journalists reporting on sexual abuse and corruption cases. The report also highlighted the case of Daysi Mina Huamán, a young journalist with television broadcaster Cable VRAEM who went missing on 26th January 2020 and whose whereabouts are unknown. According to the Coalition For Women In Journalism, her family has denounced that local police have failed to take the investigation into her disappearance seriously.