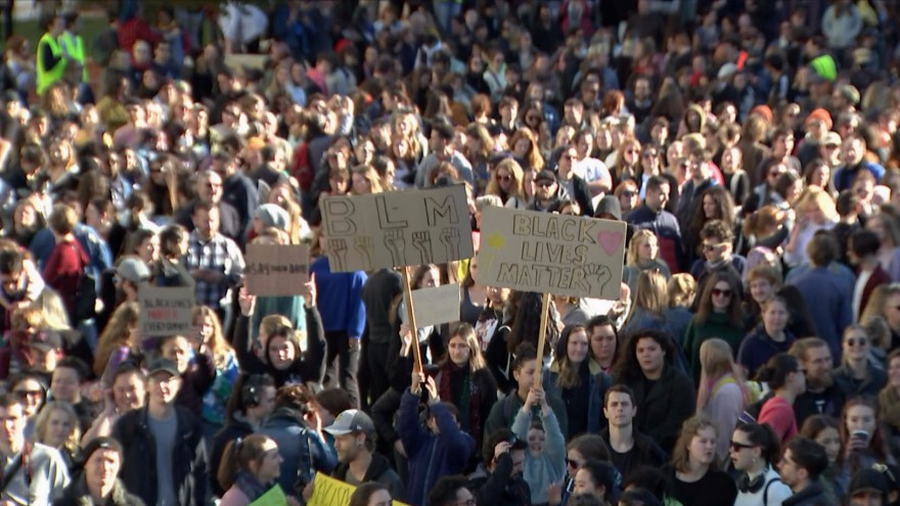 Thousands protest against racism while statue removed in Hamilton

In June 2020, tens of thousands of New Zealanders came out in support of the Black Lives Matter movement after the death of George Floyd in the US. On 12th June, thousands marched from Aotea Square, in central Auckland, to the US consulate-general, carrying signs with messages such as “Be kind”, “Silence is Betrayal” and “Do Better, Be Better”.

According to a Guardian news report, the protests against police brutality have resonated strongly in New Zealand, and the hashtag #armsdownNZ has been trending for days, calling for a police trial of armed patrols to be shelved permanently.

Julia Amua Whaipooti, a Maori lawyer and activist in Wellington, said that both of the communities near Auckland that were selected for armed patrols had large populations of Maori and Pacific Islanders.

Following the outcry, New Zealand Police Commissioner Andrew Coster announced that he would not extend the pilot programme and said he was committed to keeping New Zealand cops unarmed.

The Green party, a coalition partner of Jacinda Ardern’s centre-left government, issued a strongly worded statement, throwing its support behind the Black Lives Matter movement and drawing attention to endemic racism faced by Māori and Pacific Islanders, who are overrepresented in prison numbers and confront an entrenched, endemic disadvantage in health, housing and education on a daily basis, among other socioeconomic indicators.

Auckland hip-hop artist Mazbou Q who has been one of the organisers of the protest said the same white supremacy that resulted in the death of George Floyd is also present in New Zealand.

A city in New Zealand removed a statue of the British colonizer it was named after, following requests from a Maori tribe, who call him a murderer.

In the city of Hamilton, a statue of a British naval captain was removed by the city council after a local Māori elder threatened to take it down by force. The statue of Captain John Hamilton, after whom the city in the central North Island is named, was gifted to the city by a local company in 2013.

Council chief executive Richard Briggs said in a statement that the decision to remove it from Civic Square was made after it received a request from local iwi (tribe), Waikato-Tainui.

Hamilton was a captain during the battle of Gate Pā during the 19th century New Zealand wars, a series of bloody battles between Māori and the British government about disputed land purchases and colonial occupation. The plans to remove the statue come as wider conversation develops about the future of New Zealand’s colonial statues.

A new report released on 20th June 2020, showed that people of diverse sexual orientation, gender identity and expression, or sex characteristics (SOGIESC) continue to suffer in New Zealand from discrimination when it comes to basic human rights like access to quality healthcare, education and work.

The “Prism” report issued by the Human Rights Commission details six human rights issues related to people of diverse SOGIESC to help improve their lives. They are the rights to freedom from discrimination, to information, recognition before the law and the highest attainable level of health, education and work.

On the right to information, the report found that unmet information needs are a considerable obstacle for the identification and resolution of issues concerning people with a diverse SOGIESC. It also found that data collection does not currently reflect a human rights-based approach. This is particularly clear in response options that limit diverse answers and the ability of SOGIESC diverse people to be counted.

According to the report, “it is difficult to prove a problem exists when there are no numbers to support this. Without accurate baseline data on SOGIESC-diverse communities, there can be no robust analysis of the scope or nature of the challenges faced, nor measures put in place to alleviate those challenges”.

“Without high quality data, government legislators, policy makers, budget administrators, managers and practitioners, whether in health, education, the justice system, or elsewhere, fall back on their own preconceptions of what is required – an obvious failure leading to the present intolerable situation.”

The report recommended that the authorities “develop and implement, in consultation with SOGIESC-diverse people, a comprehensive plan to collect sexual orientation, gender identity, and sex characteristics data in population and household surveys” and “develop definitions, classifications, data standards and data collection guidelines reflective of SOGIESC-diverse groups in accordance with this plan”.

“The testing times we are in, with the Covid-19 pandemic, have highlighted once more how essential it is for individuals and society to have secure means of communication and to be able to have confidence that organisations will protect their personal information.”