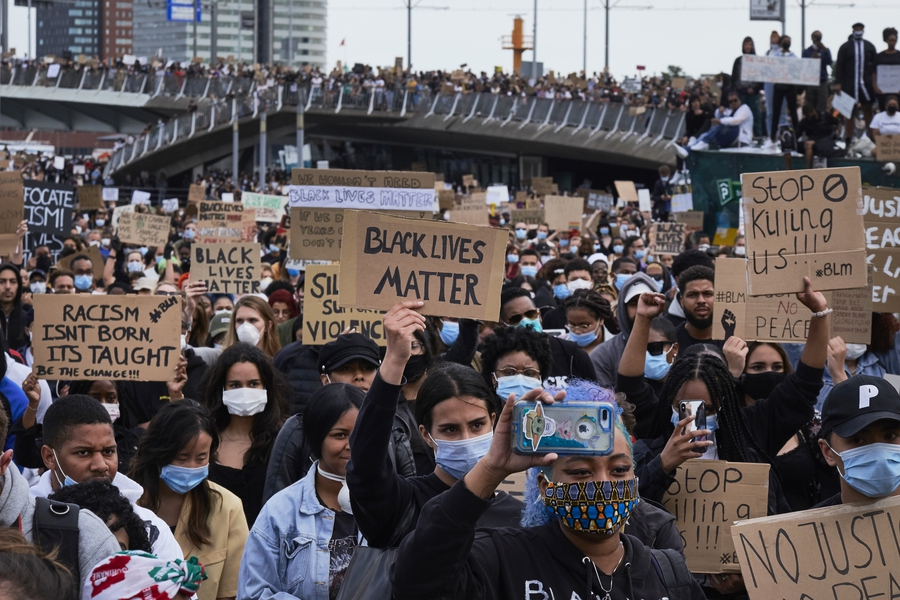 In the months of May and June 2020, the Netherlands experienced an exceptionally high number of large demonstrations. Throughout the country there were several protests; by the Black Lives Matter movement against racism, by farmers against a new law on the content of cattle feed, and by critics of the coronavirus measures who are against the government’s lock-down policy.

On 1st June 2020, following mass protests against racism in the US after the death of George Floyd, a Black man, by a Minneapolis police officer, over 10,000 people gathered at the Dam Square in Amsterdam to protest against racism and police brutality. The protests were organised by Kick Out Zwarte Piet in collaboration with the group Black Queer & Trans Resistance NL.

Demonstrations in other cities soon followed. The mayor of Amsterdam, Femke Halsema of the Greens Party, had given permission for a small demonstration of up to 300 people. When it became apparent that this number would be exceeded and that social distancing would not be possible, she decided not to order the police to disperse the protesters as she feared that this might lead to conflict due to the nature of the issue being protested. She also said that the demonstration is ‘too important’ for such intervention. This decision earned her a great deal of criticism as she was accused of not enforcing the coronavirus measures because the demonstration was in line with her own political views.

Several MPs took to Twitter to express their view that the protests were problematic due to the COVID-19 pandemic, with some labeling them a “slap in the face of our healthcare staff”.

Several other BLM protests took place throughout June 2020, including one at the Malieveld in The Hague. A small protest of 500 people took place on 19th June 2020 in the town of Hoorn, North of Amsterdam. The protesters called for the removal of the statue of colonial-era Dutch officer Jan Pieterszoon Coen. A small group of counter demonstrators also gathered. Police dispersed the groups with shields and batons and five people were arrested.

Less than three weeks later, organisers of a demonstration at The Hague against the government’s coronavirus measures were not granted permission to protest as the authorities feared that it would pose a risk to public health. Nevertheless, many people decided to come to the Malieveld in The Hague. When police began to put an end to the demonstration this led to violent altercations and more than 400 people were arrested. The police reported that hooligans from across the country had mixed in with the protesters to create chaos. The Prime Minister publicly criticised “snorting hooligans” for misusing the right to demonstrate to wreak havoc.

In a separate development, farmers protested in early July 2020 against a new law on the content of cattle feed which they say is detrimental to their livelihood. As reported previously by the Monitor, farmers have protested about regulations on nitrogen emissions which they say will affect them negatively. About 50 farmers were detained for blocking the road with their tractors during the demonstration.

These mass gatherings have sparked public debate about the right to demonstrate under the prevailing social distancing rules. Critics condemn the difference in attitude of the police and the way in which authorities grant or deny demonstration permits based on the issue that is being protested.

In an attempt to involve more young people in political decision-making, the government has proposed to allow 16- and 17-year-olds to support citizen’s initiatives. This would mean that young people could put societal issues on the agenda of the parliament even before they reach the voting age of 18.