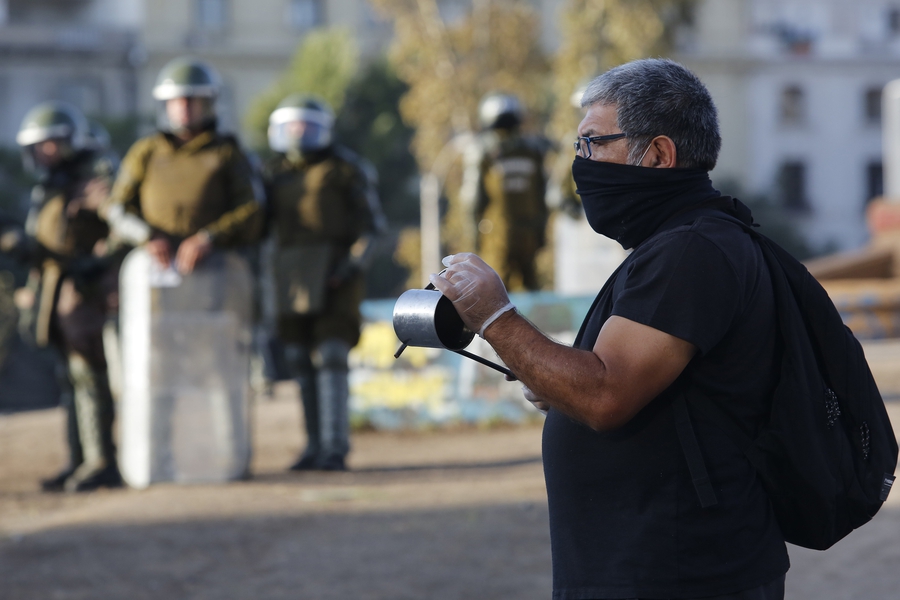 On 18th March 2020, the Chilean government issued a decree that established an exceptional “state of catastrophe” for three months due to the coronavirus (COVID-19). The legislation also allowed the president to take further measures such as restrictions on gatherings in public spaces and individuals’ movement, quarantines or curfews.

The pandemic has forced the postponement of the referendum which was meant to be the starting point to creating a new constitution for Chile, a key demand of the mass protests that started in October 2019. The referendum was rescheduled from April 2020 to 25th October 2020.

On 4th June 2020, Mapuche leader Alejandro Treuquil was shot and killed in We Newén, a commune in the La Araucanía region. Days before, he had denounced police violence and harassment against his community to the national human rights institute INDH. Alejandro and three others were ambushed by an armed group; he and his family had received death threats before this attack and his partner had suffered a spontaneous miscarriage after an alleged attack by police officers on the We Newén community.

On 9th June 2020, Dr Leonor Olate was ambushed by a group of three men who threatened, harassed and sexually assaulted her while saying that she should stop supporting the Mapuche. Dr Olate was treating an incarcerated Mapuche leader who had been on a hunger strike. Chile’s Medical Board and Amnesty International have urged authorities to investigate this attack.

Although the sanitary emergency halted the wave of mass protests in Chile, sporadic protests have continued through roadblocks and cacerolazos (pot-banging protests) on balconies. On 26th April 2020, about 50 people protested in Santiago against the postponement of the constitutional referendum previously scheduled for that day. Although the demonstration was peaceful, five people were detained by the carabineros police for violating public health measures that prohibited gatherings of over 50 people. According to news reports, protesters were wearing masks and attempting to maintain social distancing.

On 27th April 2020, another protest in Santiago was violently repressed by the police. Dozens of Chileans, wearing face masks and maintaining social distance, gathered to denounce police brutality on the 93rd anniversary of the militarised police force Carabineros. Protesters also recalled the postponed referendum and condemned president Piñera's government. The police used tear gas and water cannon against demonstrators, with over 60 people detained for infringing public health measures.

On 1st May 2020, during the celebration of International Workers’ Day, unionised workers joined activities in Antofagasta, Concepción, Valparaíso, Santiago and other cities in Chile. In some cities, such as Valparaíso and Santiago, protests were disrupted by police. At least 57 people, among them leaders of major workers' unions and journalists, were detained in the centre of Santiago. Bárbara Figueroa, president of the Central Unitaria de Trabajadores (Central Union of Workers - CUT) was one of the leaders arrested and said the actions of the police were inexplicable. "We weren't doing anything irregular, we weren't generating any provocation," Figueroa said, noting that the demonstration was to be held in accordance with coronavirus restrictions implemented by the government. In Valparaíso, police also used tear gas and water cannon to disperse demonstrators.

After reports that among the Workers’ Day protesters was an individual infected with COVID-19, on 5th May 2020 the Chilean Chamber of Deputies approved a bill increasing penalties for individuals or organisations who "endanger public health" with sanctions including up to three years in prison, fines and/or community work. The legislation was approved in the Senate and enacted on 18th June 2020.

The health crisis has aggravated the situation of unemployment and poverty in Chile, leaving many marginalised communities facing hunger and leading people to protest in their homes and on the streets. On 18th May 2020, many joined cacerolazos in Santiago and other cities, while hundreds took to the streets to protest food shortages during the lockdown. About a hundred people gathered in El Bosque, a neighbourhood in the outskirts of Santiago. “This is not against the quarantine, it is against hunger,” one protester told news agency EFE. Groups of protesters threw stones, blocked streets and set fires to barricades and the demonstration was disrupted by anti-riot forces using tear gas and water cannon. Three protesters were detained according to news reports.

On the same day in Valparaíso, the president of the local chapter of Chile’s Journalists’ Association, Colegio de Periodistas, was detained during another workers’ demonstration disrupted by police. The International Federation of Journalists (IFJ) published a statement supporting the formal complaints made by Chilean professional organisations and their demands justice for the detained journalists.

At the end of May 2020, visual artists collective Delight Lab said its members had been threatened after they projected the word “hunger” on one of Santiago’s main buildings on 18th May 2020. Pictures of the projection went viral on social media in the context of protests against hunger repressed in El Bosque. According to the artists, Chilean police used light spots to hide a second projection the following day. The artistic collective also denounced that harassers had published their photos and private information, including addresses. In addition, legislator Diego Schalper (Renovación Nacional) said in a radio interview that the artists should be investigated for the projection.