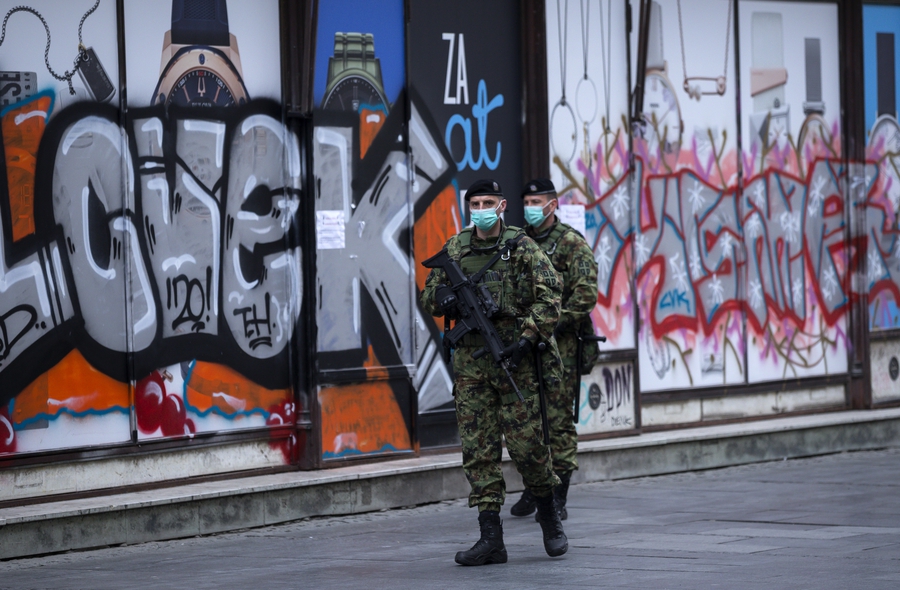 The army patrol streets during the COVID-19 state of emergency (Photo by: Srdjan Stevanovic / Getty Images)

The Balternativa movement states on its website that it is launching a long-announced petition to ban NGOs in Serbia. The text invites citizens to support their petition with signatures and announces that their members and activists will organise signature collection throughout Serbia. According to the petition, "it aims to ban the work of non-governmental organisations that posed a risk in the past for the national security of the Republic of Serbia”. They specifically ask the Republic Public Prosecutor to initiate proceedings at the Constitutional Court to ban the work of the following organisations: Helsinki Committee for Human Rights, Open Society Foundations, the Belgrade Fund for Political Excellence, Humanitarian Law Centre, the Center for Cultural Decontamination, the Center for Euro-Atlantic Studies and Women in Black. This movement was previously known for its public appearances in which it verbally attacked activists and civil society organisations (CSOs), calling them "traitors and foreign mercenaries."

The Serbian Radical Party of convicted war criminal Vojislav Seselj also advocates for banning the work of certain CSOs in his election campaign. They are proposing a law to ban state funding for NGOs, for which, as they stated, more than ten billion dinars is allocated from the republic budget every year. According to them, citizens should not pay “NGOs that openly engage in anti-Serbian policies and subversive activities.” Such dangerous rhetoric, which dates back to the 1990s, is an unequivocal attack on freedom of association and contributes to an even greater narrowing of the environment in which CSOs operate. It is also an open call for verbal attacks on organisations and their activists.

The Civic Front announced that an activist of the United Movement of Free Tenants from Nis, Jana Krstić, was verbally attacked on the Nisava quay by unknown young men who stopped her and threatened her because of a T-shirt she was wearing with the logo of the initiative ‘Don’t let Belgrade d(r)own’. This verbal attack took place at the same place where, a year ago, a group of neo-fascists stabbed student Uroš Janjić with a knife because of an anti-fascist T-shirt. Jana Krstić is one of the most recognisable activists of the United Movement of Free Tenants who participated in numerous protests, manifestations and actions. The Civic Front called on competent authorities to condemn this case, emphasising that in the past the authorities have expressed a mild response, which, according to them, is the reason for many incidents like this occurring in Nis.

"We believe that the attack on Jana is an attack on all of us and on all people who are close to the ideas of anti-fascism, freedom, solidarity and tolerance. The Civic Front demands that the competent authorities react and protect the citizens of Nis from the savagery of neo-fascist organisations”- The Civic Front (translated from Bosnian).

It is especially worrying that in recent months in Serbia there has been a more visible spread of hatred, violence and elements of fascism. However, there is a noticeable absence of reactions from competent authorities.

In a separate incident, after appearing as a guest on the show Pressing on N1 television, sociologist and researcher of the Bureau for Social Research (BIRODI), Zoran Gavrilović, was the target of threats and insults on Twitter. The show in which Gavrilović appeared as a guest, together with a member of the Council of the Regulatory Body for Electronic Media (REM), Olivera Zekić, talked about the media scene in Serbia, the work of REM and the ban on the pre-election video in which President Aleksandar Vučić is with a child. This is not the first time that Gavrilović or BIRODI have been the target of verbal attacks and threats due to their independent work. Examples of labeling CSOs and individuals for the work they do have become more frequent in recent months, and speedy reactions from the competent authorities are most often absent. It is worrying that such attacks often come from government officials who occupy the highest state positions and who view CSOs as their opponents.

Attacks on the media

“The attack on Mikic on election day is the culmination of months of intimidation, threats and pressure faced by Serbian journalists during the coronavirus and election campaign - said Zeljko Bodrozic, president of NUNS.