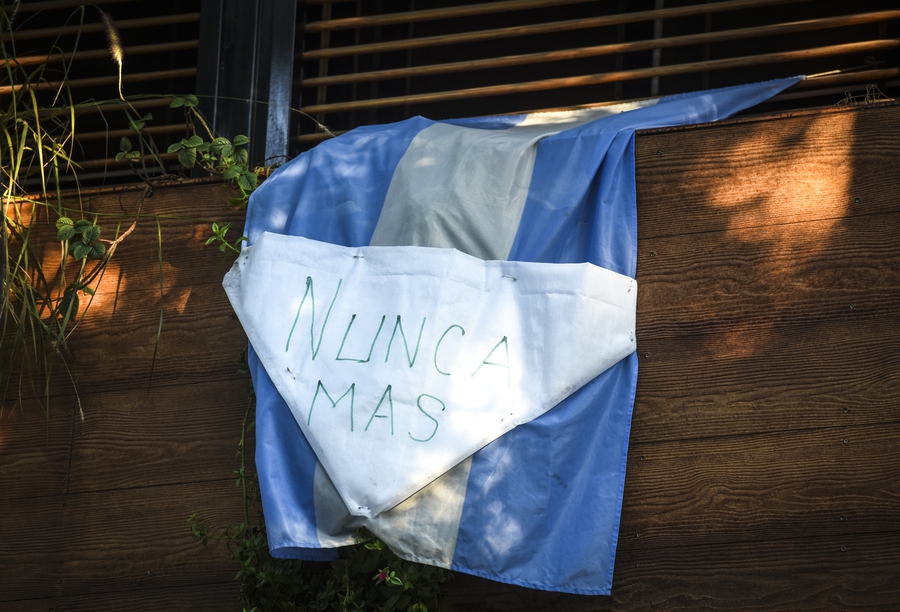 A white headscarf with the message Never Again hangs from a balcony in Buenos Aires. 24 March, 2020. Marcelo Endelli/Getty.

With the spread of corona virus (COVID-19), the Argentinean government has issued measures and regulations to cope with the sanitary emergency. These measures include the suspension of mass gatherings (Decree 260/2020), preventive and compulsory isolation, limitation of movement within national territories, public transport regulations and suspension of events and official meetings (Decree 297/2020).

In this context, human rights organisation, the Centre for Legal and Social Studies (CELS) has denounced arbitrary detentions, harassment and other situations which have taken place in the city of Buenos Aires since the measures were first implemented. According to the organisation, detentions have been documented mostly in villas (shantytowns) and popular neighbourhoods, with youth and homeless persons among the most affected. CELS has filed an access to information request with the Ministry of Justice and Security in order to investigate the cases reported and verify if the implementation of emergency measures has respected the limits imposed by norms and protocols.

On 29th January 2020, unidentified individuals fired at the home of journalist Carlos Walker in Mar del Plata, Buenos Aires province. Walker hosts the daily programme "Hora 13" on Radio CNN Mar del Plata and writes for the news website El Marplatense. As reported by the Committee to Protect Journalists (CPJ), at around 1 a.m. on the night of the attack, two assailants fired at least 13 shots with 9mm weapons at Walker’s home. Nine of the bullets hit his apartment but did not cause any injuries. The journalist posted a video, captured by his building's security cameras, showing two masked individuals approaching the entrance gate of the building, firing, and fleeing on foot. Walker told CPJ that he could not speculate on the reason for the attack and that he had not received any threats except for the “regular” comments on social media.

On 13th February 2020, journalist Diego Moranzoni received death threats on his Instagram account for reporting on a violent murder in Villa Gesell, Buenos Aires province. Moranzoni hosts a daily news and opinion programme, Crónica 2020, on broadcast station Crónica HD. As the journalist told CPJ, he had been reporting on the murder of Fernando Báez Sosa, a teenager who was brutally beaten to death on 8th January 2020, allegedly during a street fight with a group of rugby players. The brutal crime has shocked Argentineans and led thousands to join protests in February 2020 demanding justice for the young man.

Local news media published screenshots of the threatening messages received by the journalist, seemingly in connection with his reporting of the crime. One of the messages sent by user @maximothomsen19 read: “Stop talking, I'm in jail, and they are telling me that you're going too far and it's ugly. Stop talking because when I leave I [will] kill you, your family and your son”. The sender’s username coincides with the name of one of the men accused of the killing, Máximo Thomsen. Thomsen and seven other men charged with the killing are being preventively detained during the criminal investigation and trial. The reporter said he initially thought it was a false account but decided to publicly expose the attacks and file a police complaint due to continued messages threatening his family. The account used to send the threatening messages has since been removed.

In January 2020, lawmakers linked with vice-president Cristina Kirchner presented before the Senate a bill which seeks to hold the media responsible for disseminating information and complaints about acts of corruption. The bill (S-3435/19) establishes that the "publication of content by one or more mass media that could affect public perception regarding the principle of innocence" would lead to the annulment of any judicial resolution ordering the preventive detention of the accused.

The president of the Inter-American Press Association (IAPA) described the bill as “inconsistent with the freedom of the press and the informative work of the media.” According to IAPA, the project reduces transparency in public administration by shielding corrupt officials and restricts the public's right to know. The Asociación de Entidades Periodísticas Argentinas (Argentinean Association of Journalistic Entities - Adepa) also rejected the project, considering that it represents a bid to limit investigative journalism and promote self-censorship. Adepa called on authorities to withdraw the bill.

On 19th February 2020, thousands gathered outside Argentina’s National Congress in Buenos Aires to once again demand the decriminalisation of abortion. Demonstrations on what is known in the country as “Día de Acción Verde” (Green Action Day) took place in a hundred cities across Argentina. “We understand that it's a historic moment and we have to stay organised on the street,” said Victoria Tesoriero of the National Campaign for Legal, Safe and Free Abortion, speaking to AFP.

Abortion is currently illegal in Argentina and can be punishable by up to fifteen years in prison. As reported previously by the CIVICUS Monitor, the grassroots movement for abortion rights gained momentum in 2018 and proposed legislation was approved in the lower house of Congress that year. Yet the bill was rejected in the Senate in a narrow vote. In 2020, however, the political landscape changed significantly with the election of president Alberto Fernández, who has expressed support for legal abortion as a public health issue. In 2019, the National Campaign presented another bill to the country’s Congress, but it has not been debated and remains a proposal up for consideration in the legislature.

“Without a march, but with memory”: mobilisation in times of quarantine

24th March is Argentina’s National Day for Memory, Truth and Justice, when traditionally hundreds of people take to the streets to commemorate the anniversary of the military coup that instituted a eight-year dictatorship in the country. This year, because of COVID-19, human rights advocates had to move their activities online and find creative ways to say “Never again”. It is the first time the annual commemoration marches have not taken place since the end of the military regime in 1983. Instead, human rights movement led by grandmothers of victims Abuelas de la Plaza de Mayo asked people to stay home and show their support by draping white headscarves from their their balconies, doors and windows. Thousands used social media to post photos and messages using tags such as #PañuelosConMemoria, #24M, #44AñosDelGolpe, #Son30000, #MemoriaVerdadYJusticia. Human rights organisations also organised online broadcasts for “this 24 March, without a march but with memory”.

In a positive development, the Argentinean civil society organisation Directorio Legislativo has been mapping regulations issued by 19 countries in Latin America and the Caribbean in the face of the COVID-19 crisis. The monitoring includes rules covering health, labour, education, economics and movement across and within countries.