Free speech under threat in Bolivia during COVID-19 pandemic 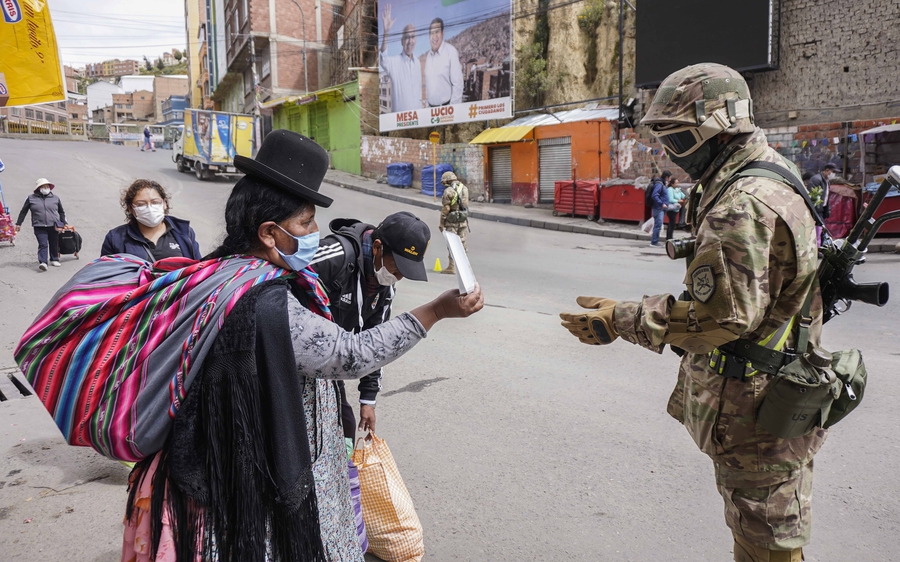 A military officer asks a woman for his identity card at a checkpoint. 30 March 2020 - La Paz. Javier Mamani/Getty Images.

As a result of the coronavirus (COVID-19) pandemic, Bolivian presidential elections scheduled for May 2020 were postponed indefinitely. In mid-March 2020, the country’s interim government declared a nationwide mandatory quarantine. Some of the measures established have been criticised for adopting overly broad language that could be used to restrict freedom of expression, as detailed in the “Expression” section of this update. As disclosed by public officials, at least 67 people have been detained for offences against public health, for acts such as spreading “disinformation” or inciting public mobilisations.

Civil society organisations have warned against the use of emergency powers to unduly restrict freedom of expression, which has become a concerning trend around the world. In this regard, organisations have urged for clarification from Bolivia on their restrictions and on reports of arrests.

Emergency measures may overly restrict freedom of expression during COVID-19

On 25th March 2020, acting president Jeanine Áñez issued Supreme Decree 4200 to extend quarantine measures in response to COVID-19. One of its provisions, article 13.II, stipulates that “persons who incite non-compliance with this Supreme Decree or disinform or cause uncertainty to the population shall be subject to criminal charges for the commission of offences against public health”. Convicted persons could face sentences of up to 10 years in prison.

Human Rights Watch alerted that this provision is too broad and vague, enabling authorities to prosecute those who criticise public policies. Without a precise definition of what constitutes “disinformation” or an act that causes “uncertainty”, this language could be used to silence opinions and comments protected by the right to freedom of expression. Other international civil society organisations also warned against public measures that may threaten freedom of expression during the pandemic and advised the government of Bolivia to amend or withdraw this provision.

On 15th April 2020, Government Minister Arturo Murillo said in a press conference that 67 “political actors” had been arrested for spreading disinformation and for participating in “destabilisation movements” which threaten public health. Out of these 67, the minister stated, 37 have already been sentenced. Murillo cited cases of detainees caught selling false movement permits, but also of people taking part in “virtual war” or being paid to organise public mobilisations. Earlier in April, news outlets had published comments made by Murillo accusing political groups, particularly former president Evo Morales’ MAS party, of orchestrating activities to destabilise the country during the pandemic. Amnesty International asked the Bolivian government for clarification of these accusations and of criminal proceedings mentioned in Murillo’s briefing, stating that undue restrictions on freedom of expression could result in censorship of journalists, political leaders, rights defenders and health workers. More information on protests and leaders detained in this context is included in the “Peaceful Assembly” section of this update.

On 28th March 2020, the Inter-American Press Association (IAPA) published a report on the status of freedom of expression in Bolivia. In contrast with former president Evo Morales’ administration, which adopted several policies to smother and silence independent media in the country, the report considers that the interim government has expressed concern with re-establishing journalistic and media independence. However, the brief also highlights that verbal or physical attacks on journalists have not ended. In particular, members of the press reporting on social conflict and protests are often subjected to stigmatisation and assaults.

Bolivia ranked 114th out of 180 countries analysed in the latest press freedom index by Reporters Without Borders (RSF), published on 21st April 2020. This is a one place drop compared to 2019, when the country was ranked 113th. The small decline was partly attributed to attacks against journalists during protests and strikes as the country entered a period of instability following the disputed November 2019 presidential election.

According to RSF, during Morales’ three consecutive terms as president (2006-2019), the media were often the focus of tension between government supporters and opponents. Members of the media faced strong pressure to refrain from any negative comments about the government and journalists regarded as overly troublesome were subjected to judicial harassment. The government also used financial pressure and arbitrary arrests which, combined with a high level of impunity, helped to foster a climate of self-censorship.

At least four people were detained in Riberalta, El Beni department, for organising a protest on 31st March 2020 over food shortages during the COVID-19 quarantine. On 1st April 2020, Beni department’s Prosecutor’s Office announced it had ordered the arrest of some of the protest’s leaders for inciting non-compliance with quarantine measures. They will face charges for offences against public health in accordance with emergency decree 4200. Two days later, the Bolivian Ombudsman’s Office reported that four social leaders detained were separated from their lawyers by the police and their whereabouts were unknown for several hours.

According to news reports, similar protests took place in four different regions of Bolivia. In many of these demonstrations, protesters demanded aid and medical care. In some cases, store owners, transport workers and others requested the flexibility of strict lockdown measures.