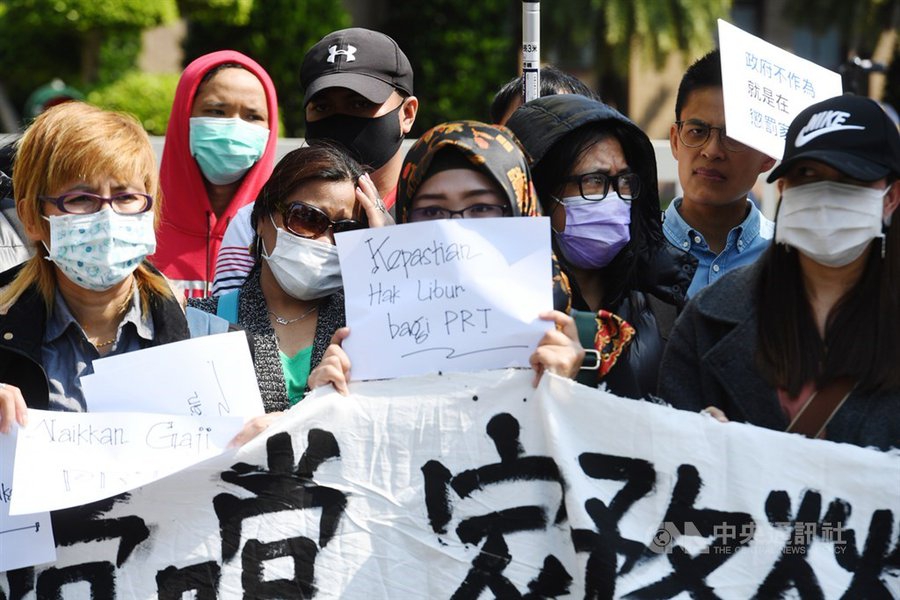 In December 2019, the CIVICUS Monitor released its People Power Under Attack 2019 report which showed that Taiwan was the only country in Asia rated as 'open'.

There have been peaceful protests in recent months calling for better working conditions for women migrant workers as well as by indigenous Tao people demanding the removal of nuclear waste from Orchid Island. Further, the courts have awarded compensation to a group of protesters who were injured during clashes in 2014 over a controversial trade pact with China. The Committee to Protect Journalists (CPJ) has also raised concerns that press freedom could be affected by Taiwan’s attempts to thwart China’s efforts to influence the media there.

On 8th March 2020, which was International Women's Day, a women's rights group and a coalition of migrant rights groups staged a rally in downtown Taipei to demand better working conditions for women migrant domestic helpers and caregivers.

About 50 activists, including migrant workers, attended the rally outside the Executive Yuan, which was organised by the women's rights group Awakening Foundation and the Migrants Empowerment Network in Taiwan (MENT), a coalition of ten migrant rights groups.

Gracie Liu, director of the Migrants and Immigrants Service Centre under the Hsinchu Catholic Diocese, said that even though the annual day celebrating the achievements of women has been observed for over a century, the working conditions of migrant domestic helpers and caregivers in Taiwan, who are mostly women, was inadequate.

"Existing laws do not properly protect our over 200,000 migrant domestic helpers and caregivers and with their long work hours it is as if they are working in a sweatshop”.

As previously documented, women migrant workers have protested before to end violence against women and poor working conditions. Migrant workers often face incidents of ill-treatment by migrant brokers and beatings and rape by employers. Derogatory terms have also been used against them. The demands they have previously made include inclusion for caregivers in Taiwan’s Labour Standards (ALSA), mandatory labour insurance, inclusion for domestic workers in Taiwan’s long-term care system, vacation leave, a ban on illegal charges by third-party brokers, and paid overtime if employees are forced to work for some or all of their scheduled days off.

In November 2019, a group of indigenous Tao people and anti-nuclear activists protested in front of the Executive Yuan demanding that the government move its nuclear waste storage facility off Orchid Island.

The protesters also rebuffed a government offer of NT$2.55 billion (USD 83.6 million) in compensation to residents of the island.

They chanted slogans demanding the relocation of the facility away from the island off Taitung County that is home to the Tao people, also known as the Yami, and made it clear that they will never give up that goal, accusing the government of trying to buy them off ahead of major elections.

Currently, some 4,000 Tao people live on Orchid Island, and the government reportedly did not fully consult them before deciding to allocate the money to the residents in compensation for the damage caused to them by the facility over the past four decades.

Some of the protesters later met Minister Without Portfolio Lin Wan inside the Executive Yuan to express their firm stance against the nuclear waste storage plant and asked the government not to try to buy them off ahead of the elections.

The decision to use Orchid Island as the location for the storage of low- and medium-level nuclear waste from Taiwan's nuclear power plants was made in 1974 and it began receiving shipments in 1982. The whole process has long been recognised as deceptive, with a 1993 report in the Nuclear Monitor newsletter titled "Orchid Island: Taiwan's Nuclear Dumpsite" detailing how residents at the time were led to believe that what was being built was actually a fish cannery.

In November 2019, Taiwan’s Ministry of Economic Affairs announced it had concluded that the island’s Tao residents did not know of the government’s plans to create a nuclear waste facility, which were approved by Chiang, then a premier, and fellow premier Sun Yun-hsuan in the 1970s. The Tao community has insisted for over 30 years that the government stop storing nuclear waste on the island.

In November 2019, police in Taiwan were ordered by a court to pay compensation to a group of protesters who were injured during clashes in 2014 over a controversial trade pact with China.

Hundreds of people stormed the government’s headquarters five years ago until riot police eventually dislodged them using shields, batons and water cannon. More than 100 activists and police officers were injured in the clashes which were part of a period of political protest against then-president Ma Ying-jeou’s Beijing-friendly policies that became known as the “Sunflower Movement”.

A district court in Taipei ruled in favour of 14 protesters who were injured by police while holding a sit-in outside the building. The court said officers used “excessive” force which led to “serious injuries” as it ordered the police to pay around NT$1.11 million (USD 35,900) in compensation.

In December 2019, the Committee to Protect Journalists (CPJ) published a report entitled “One Country, One Censor: How China undermines media freedom in Hong Kong and Taiwan”. The report focused on understanding how China was trying to influence the media and that Hong Kong and Taiwan were on the frontlines of this battle.

CPJ notes in the report that Taiwan has one of the most free media scenarios in Asia, a product of its evolution from military to democratic rule in just over 30 years. However, as China becomes more aggressive in finding ways to spread its message, Taiwan faces a dilemma on how to maintain its openness and press freedom while facing an adversary that has vast resources and technological prowess.

Facing potential threats, Taiwan has employed a patchwork of legal and regulatory approaches to punish the media for inaccurate reporting or distortions, while experimenting with other methods of fighting lies with truth.

“It's one of the interesting paradoxes that progressive civil society in Taiwan is pushing for legislation to combat fake news, while civil society activists fear that legislation against fake news in Southeast Asia, for example, will be used by governments to crack down on political dissent”

CPJ concluded that “if Taiwan can ward off Chinese influence without resorting to draconian measures aimed at curbing freedom of the press, it could offer an important lesson to others facing media manipulation from the outside”.