Despite serious crimes probe, Myanmar continues to silence critics and block the internet 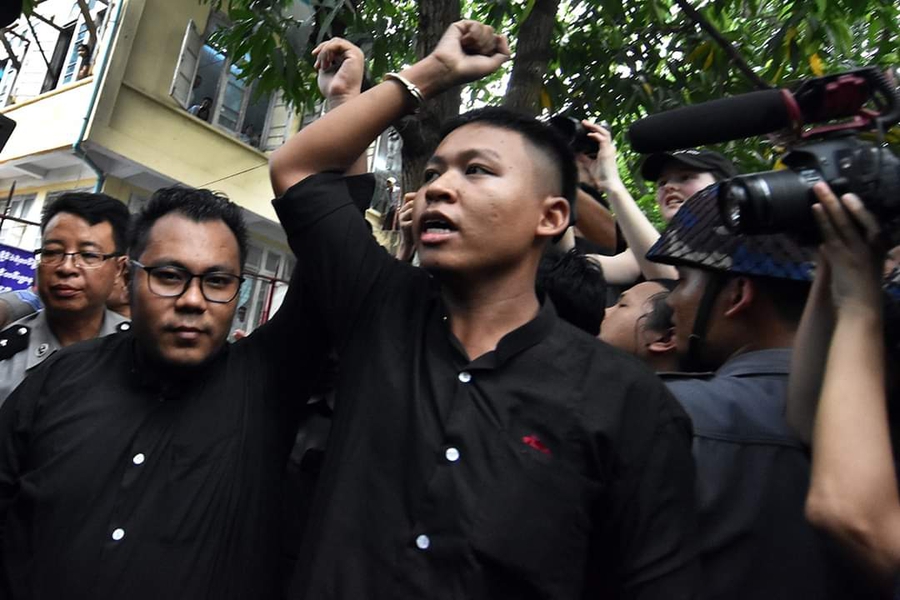 Over the last few months, the authorities convicted film maker Min Htin Ko Ko Gyi and the Peacock generation poetry troupe for criticism of the military, while a Kachin activist was jailed for insulting a judge. The internet shutdown in Rakhine state remains. Rohingya campaigners outside the country faced threats while protesters continue to be arrested and convicted.

As previously documented, there have been ongoing efforts by human rights groups and the UN to address serious violations by the military against the Rohingya in the Rakhine state as well as in the Kachin and Shan states. More than 700,000 Rohingya women, men and children were forced to flee from northern Rakhine state to neighbouring Bangladesh in 2017. Those who remain in the Rakhine state also face a systematic denial of their rights

In August 2019, the UN Secretary-General presented his report to the UN General Assembly. The report focused on the Rohingya crisis in the country, including seeking a durable situation and a credible accountability process to bring the perpetrators of violations and abuses against the Rohingya to account.

The UN Special Rapporteur on the situation of human rights in Myanmar, Yanghee Lee provided an update to the Human Rights Council in September 2019. She highlighted reports of civilians being killed, allegations of torture and villages being burnt by the military in Rakhine state and that Myanmar has done nothing to dismantle the system of violence and persecution in Rakhine.

In the same month, the Independent International Fact-Finding Mission on Myanmar set up by the Human Rights Council in 2017 presented its final report and handed over its evidence of serious crimes under international law to a new mechanism - the Independent Investigative Mechanism for Myanmar - that is mandated by the Human Rights Council to follow up and prepare files for criminal prosecutions.

In November 2019, the International Criminal Court (ICC) authorised the ICC prosecutor to investigate alleged crimes against humanity, namely deportation, persecution and other inhumane acts against the Rohingya in Myanmar since October 2016.

In December 2019, the UN General Assembly approved a resolution condemning human rights violations against the Rohingya and other minorities, including arbitrary arrests, torture, rape and deaths in detention. The 193-member body voted 134-9 with 28 abstentions.

Myanmar appeared before the International Court of Justice (ICJ) from 10th to 12th December 2019  to respond to a complaint filed by The Gambia for alleged violations of the Genocide Convention. Myanmar’s de facto leader Aung San Suu Kyi rejected the genocide allegations, claiming that there was no orchestrated campaign of persecution. The court will issue a decision on Myanmar on 23rd January 2020.

Filmmaker sentenced to one year in jail

“Min Htin Ko Ko Gyi is a respected filmmaker who has already spent more than four months in detention for criticizing Myanmar’s military on social media. The guilty verdict is an appalling indictment of the state of freedom of expression in Myanmar."https://t.co/YNdcLYn7xd

In August 2019, filmmaker Min Htin Ko Ko Gyi was sentenced to a year in prison by the Insein Township Court on charges of undermining the military. As previously documented, Min Htin Ko Ko Gyi,the founder of the Human Dignity Film Institute, was arrested on 12th April 2019 after a Myanmar military official accused him of defamation for a series of Facebook posts critical of the military-drafted 2008 Constitution and the military’s role in politics.

He was initially accused of “online defamation” under Section 66(d) of the 2013 Telecommunication Act. Several days later, the same officer who had lodged the initial proceedings filed a second complaint under Section 505(a) of Myanmar’s Penal Code, which prohibits the circulation of statements or reports which could cause a soldier or other member of the Myanmar military to “mutiny or otherwise disregard or fail in his duty”.

“Min Htin Ko Ko Gyi is a respected filmmaker who has already spent more than four months in detention for criticising Myanmar’s military on social media. The guilty verdict handed down today is an appalling indictment of the state of freedom of expression in Myanmar, where a Facebook post can lead to time in prison.”

His appeal against the conviction was dismissed on 9th September 2019. Meanwhile, the complaint under 66(d) is still under investigation. Section 66(d) carries a maximum two-year prison sentence.

On 30th October 2019, five members of the Peacock Generation poetry troupe were sentenced under article 505(a) of the penal code to one year each. On 18th November 2019, Kay Khine Tun, Zeyar Lwin, Paing Ye Thu, Paing Phyo Min and Zaw Lin Htut received an additional one-year sentence by the Botataung township court, also under 505(a) charges. Su Yadanar Myint will serve one year while Nyein Chan Soe was acquitted. All seven defendants face additional charges under section 66(d) for “defaming” the military, which brings a maximum prison sentence of two years.

As previously documented in April and May 2019, police arrested seven members of the Peacock Generation ‘Thangyat’ troupe for allegedly criticising the military in a satirical performance which was live-streamed on Facebook. ‘Thangyat’ is a form of slam poetry traditionally performed during Myanmar’s April New Year holiday that has long been a vehicle for humorous criticism of everything from politics to social behaviour. They were denied bail during their trial and detained in Insein prison.

In a letter to CIVICUS from jail, Zeyar Lwin and Paing Ye Thu, members of the Peacock Generation said:

“They have convicted us with no strong evidence. This is not a fair case. Because it is a case against the military, whatever we do, we will definitely be sentenced. We believe we didn’t commit a crime by performing Thangyat. This is a case of criticising and resisting an oppressive institution – the military. We will never be silenced just because they jailed us or sentenced us this way.”

Members of the Peacock Generation are facing the same charges in three other townships in Yangon and Ayerwaddy Region where they have performed.

A recent report by human rights group Athan states that Myanmar’s military has filed nearly 47 lawsuits against critical journalists, individuals and organisations it has accused of defamation during the nearly four years that Aung San Suu Kyi’s National League for Democracy (NLD) has been in power.

Outrageous. Jailed & chained for speaking up the truth!!!

On 2nd September 2019, an anti-war activist was jailed for an additional three months in Kachin state for insulting a judge under Article 228 of the country’s penal code. Paul Lu was given the sentence after he had handed the judge a broken scale to show his lack of faith in the court following a 15-day sentence under the Peaceful Assembly and Peaceful Procession Law for protesting the plight of ethnic Kachin displaced by conflict in the resource-rich state. Also receiving a 15-day jail term for her role in the protest was a young Kachin woman named Seng Nupan.

Over the past eight years, the hostilities have displaced more than 100,000 civilians in Kachin state, the majority of whom live in displacement camps near Myitkyina and in neighbouring Waingmaw township.

As previously documented, since 20th June 2019, the government has imposed an internet blackout in parts of conflict-ridden Rakhine and Chin states. On 1st September, the Transport and Communications Ministry lifted the internet ban in some townships. Yet 600,000 residents in Rakhine’s four townships - Mrauk U, Kyauktaw, Minbya and Ponnagyun - continue to be affected by internet restrictions.

Reports showed that the internet blocking in Rakhine has undermined business operations, delivery of e-government services and tourism activities. Residents said they encountered difficulties in processing mobile money services and communicating with their relatives who are working in other provinces and countries.

On 21st December 2019, civil society organisations issued a joint statement condemning the internet suspension in Rakhine. They described it as one of the longest internet shutdowns in the world. They rejected the argument of the government that the internet needs to be restricted in order to restore law and order.

Two prominent Rohingya campaigners said in December 2019 they are facing increased online abuse, including death threats, for their work. Ro Nay San Lwin, a prominent Rohingya activist based in Germany, and Maung Zarni, an academic living in exile in the United Kingdom, have told Al Jazeera that they fear for their lives but will not be "silenced" by the online harassment.

Lwin and Zarni have been fiercely critical of the Myanmar government's persecution of the mainly Muslim Rohingya community over the past seven years, irking many in Myanmar's government and its supporters.

Lwin said that he had received online messages insinuating he should be assassinated. Further, Aye Ne Win, grandson of former Myanmar ruler Ne Win and a well-known entrepreneur, has demanded that the activists be abducted and brought back to Myanmar in a video interview posted on YouTube. Win told a local media outlet that it was "high time" the Myanmar military launched an "Israeli-style kidnap operation" against the exiled activists.

Lwin and Zarni said they had alerted authorities in Germany and the UK respectively about the latest threats. Zarni said the threats against him and Lwin needed to be taken in the context of the International Court of Justice (ICJ) case (see above).

Aid Group in Rakhine ends programme due to state restrictions

The global humanitarian organisation International Rescue Committee (IRC) said it has decided to end its food programme in the Rakhine state because of government restrictions on staff movements.

On 6th January 2019, the IRC ended its Tat Lan programme that provided sustainable food security and improved nutrition and livelihoods to villages in Rakhine’s Myebon, Pauktaw, Kyaukphyu and Minbya townships. The organisation said the programme ran for more than five years and had provided livelihoods and food security for more than 56,000 people, but that the Rakhine state government instructed IRC to cease operations in 2018, though it continued its activities.

Rakhine minister of municipal affairs told the media that IRC staffers were denied travel permission because they were recruiting journalists. However, an IRC official told RFA that the organisation invited Myanmar citizen journalists and trainees from Yangon to report on Tat Lan's activities.

A Myanmar village administrator was sentenced in December 2019 to one year in jail with hard labour on charges of ‘defaming the state’ for getting involved in a May 2019 rally against a Chinese-backed coal-powered cement factory in Mandalay region. A court in Patheingyi township handed down the sentence to Moe Lin, who oversees the administration of about 100 households in Aungthabyae village.

As previously documented, at least 20 people were injured on 15th May 2019 after police in central Myanmar’s Mandalay region fired rubber bullets and tear gas into a crowd protesting construction of a coal-powered cement plant that is operated as part of a joint venture between a local firm and a Chinese partner. Residents organised the protest against the Alpha Cement Plant to demand compensation for land they say they lost when an 18-foot-wide road was built as part of the project.

According to RFA, an official from the township’s General Administration Department filed charges against 50 local residents in all for participating in the protest that turned violent. They have been charged under Section 333 of Myanmar’s Penal Code for causing harm to a public servant, under Section 435 for committing mischief with intent to damage, and under Section 114 for abetting a crime.

On 8th November 2019, six protesters were detained for organising a protest during the visit of State Counsellor Aung San Suu Kyi to the city of Mogok in the Mandalay region. They were subsequently questioned by local police. Ko Soe Htay, the leader of the protest, stated that they gathered to protest against the allocation of gem-mining blocks which favoured big corporates over small ones and said he staged a public protest to let the State Counsellor know of the unfair situation for local citizens. They were released after Suu Kyi left the region.