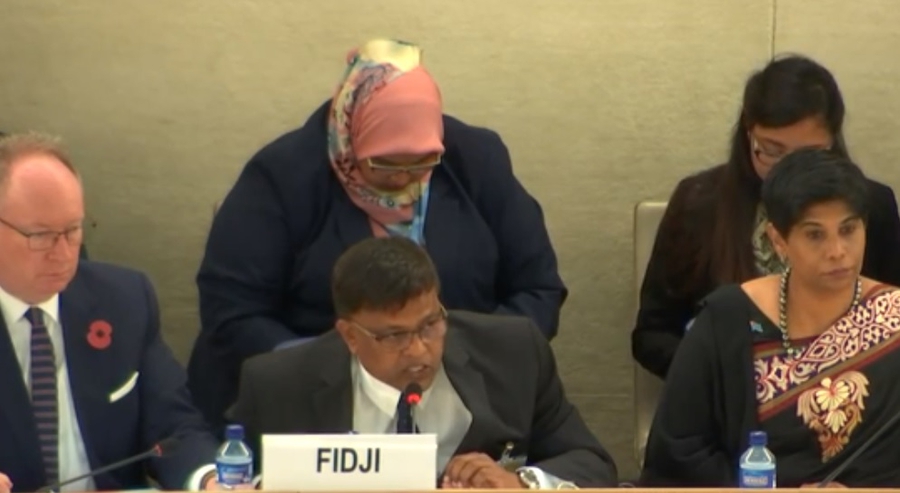 In recent months, there have been allegations of torture by the security forces against a 16 year old-boy for criticising the Prime Minister and the police have denied permits for marches by a political party and union.

On 6th November, Fiji’s human rights record was reviewed by the UN Human Rights Council. Ahead of the review, civil society organisations made submissions to the UN body on a range of human rights concerns. At the review numerous states raised concerns and made recommendations to the Fijian government related to civic space.

The Fiji delegation accepted a number of recommendations on fundamental freedoms, including to:

However, there were a number of recommendations that are still being considered and which the Fiji government will need to respond to by the 43rd session of the Human Rights Council (24th February – 20th March 2020). They include:

On 8th October 2019, a 16-year-old boy was interrogated by military and police officers over an anti-government social media post. In an interview with The Fiji Times newspaper on condition of anonymity, the teenager claimed he was physically abused at the Republic of Fiji Military Forces Queen Elizabeth Barracks in Nabua, Suva on 23rd September 2019.

He claimed two men in civilian clothes who identified themselves as military officers approached him at his home around 9am. His aunt said the men, dressed in civilian clothes, told the family the boy was wanted over an alleged post on social media directed at Prime Minister Frank Bainimarama. She said her nephew denied the allegation, but the men took him outside and put him in a vehicle.

The boy said he was taken to an empty room in the barracks where four men were waiting. He said he was questioned about the social media post where derogatory words were allegedly directed at the Prime Minister. “They kept punching and kicking me, even though I told them that I didn’t do it,” he said in the iTaukei language.

On 2nd November 2019, The Human Rights and Anti-Discrimination Commission said that its investigations team had conducted preliminary interviews with the parents of the boy. However, the CIVICUS Monitor is not aware of anyone being held to account for the abuses.

Responding to the incident, the NGO Coalition for Human Rights said, “it was extremely concerned with the recent report of the 16-year-old boy being taken in by the Fiji Military Forces for questioning over a Facebook post and the subsequent allegations of torture”. The coalition says the Facebook post depicted a vandalised bus with derogatory remarks against the Prime Minister.

NGO Coalition Chair Nalini Singh said “they were disappointed with the response from the Commissioner of Police that such arrests are lawful” and it was “deeply troubling that the Fiji Police Force has justified these actions and that joint police and military operations continue even today”.

The NGO Coalition called for the separation of the police and military with full and adequate resourcing of the police to conduct investigations and arrests, and minimise arbitrary arrests by the Fiji Military Forces. The Coalition also calls for independent investigations into these allegations of torture by the security forces.

Protest march against delays into investigation of PM’s assault denied

On 8th October 2019, the Fiji Police rejected the National Federation Party (NFP) application for a permit to hold a protest march scheduled on Fiji Day. The march was said to protest the delays in the police investigations into the assault claim by Member of Parliament Pio Tikoduadua against Prime Minister Voreqe Bainimarama.

A video of the 9th August 2019 incident taken by parliament staff shows Bainimarama grabbing and shoving Tikoduadua. However, the Parliament's Privileges Committee found no evidence of force by the prime minister. Critics say the committee has ignored key evidence by excluding the video from proceedings in favour of CCTV footage. Instead Pio Tikoduadua, was suspended for six months without salary on 6th September for refusing to apologise to the Prime Minister. On 17th October, the public prosecutor said they would not file criminal charges as Parliament's Privileges Committee had dealt with the matter.

Police Commissioner, Brigadier-General Sitiveni Qiliho said the NFP submitted the application to march on 2nd October 2019 but did not submit clearance letters from the Fiji Roads Authority and the Suva City Council. He said the police had written to the NFP but had not received a response. NFP General Secretary Seni Nabou denied this saying they had not received any official response from the Fiji Police Force regarding its permit application.

Although Article 18 of the Fiji Constitution guarantees the right to freedom of assembly, there have been a number of instances where peaceful gatherings and demonstrations have been denied by the police for arbitrary and bureaucratic reasons, as previously documented.

In August 2019, a permit application by Fijian unionists for a protest march was declined by the police. The Fiji Trades Union Congress said no reason was given for the application being refused.

National secretary Felix Anthony said in a statement the permit was applied for in July 2019. He said that during the march the unions had planned to address the ongoing harassment against workers and unionists, as well as other issues. These include the national minimum wage, right to strike, labour law reforms and imposition of individual contracts.

As previously documented, the Fiji Trade Union Congress has been denied authorisation to hold a march at least six times between 2018 and 2019, without any valid reason and often at the last minute. The Fiji authorities have also arrested unionists and workers for planning to hold protests.