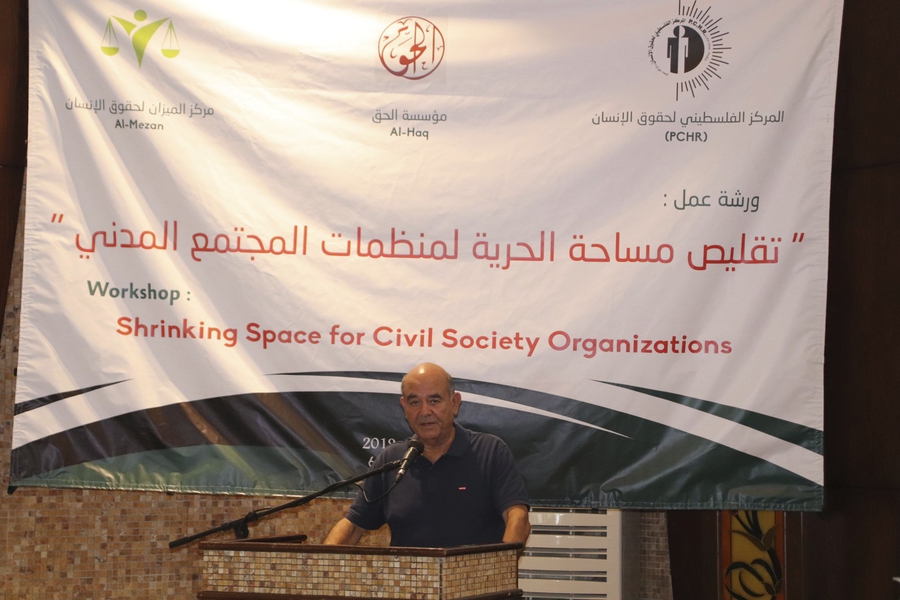 Attacks against Palestinian CSOs persisted, including by the Israeli state and some pro-Israeli groups that stepped up systematic smear campaign to de-legitimise and de-fund Palestinian groups. These smear tactics often use misinformation and exploitation of broad anti-terrorism policies by linking CSOs or their staff to terrorism in order to damage their reputation and restrict their funding and work. Such activities actively contributed to shrinking civic space, according to Palestinian CSO and international community.

In June 2019, the Israeli Ministry of Strategic Affairs claimed that in the last two years, 30 financial accounts of CSOs that the Israeli Ministry accused of being associated with “BDS-promoting” and with “ties to terrorism or terror operatives” have been closed. The Israeli State and the pro-Israeli groups combined efforts in pursuing the closer of Palestinian CSOs accounts used for online fundraising in Europe and the USA. Pro-Israeli NGOs have contributed towards this initiative of defaming and de-funding Palestinian CSOs, by bringing cases to online funding platforms such as Donorbox, Paypal, etc. For example, the Israeli legal NGO, Shurat HaDin confirmed that it approached Donorbox and requested to close down BDS National Committee (BNC)’s account on accusations of terrorism links, according to a statement on Shurat HaDin's website.

However, Al-Haq, one of the prominent Palestinian human rights organisations that has been regularly targeted by such smear campaigns, questioned the Israeli Ministry of Strategic Affairs’ claims that Palestinian CSOs accounts have been closed. Al-Haq pointed that the claim of closing Al Haq’s credit card account is incorrect because “as an organisation it does not hold credit card accounts”.

The Israeli Ministry of Strategic Affairs’ actions are indicative of a targeted campaign that CSOs believe aims to silence vocal human rights organisations actively pursuing accountability for Israel’s human rights violations in Palestine. According to Al-Haq, this campaign is “designed to smear and intimidate human rights defenders and distract them from their core work towards promoting and protecting human rights standards and holding Israeli officials to account for international crimes […]”.

Al-Haq strongly rejected allegations of terrorism links against the organisation and its director made in the “Terrorists in Suits” report saying it “relies throughout on outdated and unsubstantiated allegations”. Al-Haq further said that the Israeli government report “paints Palestinian civil society organisations as essentially suspicious and violent, in order to discredit and defund them.”

Similarly, the EU denounced as being "unfounded and unacceptable" the allegations of the EU supporting incitement or terror, or condoning antisemitism made in these reports.

In its March 2019 report the Special Rapporteur on the situation of human rights in Palestinian territories occupied since 1967, acknowledging the Israeli violations on civic space, and referring to the above reports, stated:

CSOs also reported that activists named in the Ministry of Strategic Affairs report, “Terrorist in Suits” and subjected to a follow up defamatory publication by the Ministry, led to messages inciting into violence against them. On 25th July 2019, Al Haq reported that a state owned Facebook page 4IL published an “inciting article” accusing Al-Haq’s General Director, Mr. Shawan Jabarin, of “terrorism”. Al-Haq said that in relation to this publication, visitors of the 4IL Facebook page “launched into unconstrained hate speech against Al-Haq”, including posting messages inciting into murder of Shawan Jabarin.

Front Line Defenders condemned the death threats against Al-Haq’s Director Shawan Jabarin and called on the Israeli government to take immediate measures to stop these online threats and incitement to violence.

On 15.7.2019, ‘4il’, a state owned media, published an article & a Facebook post that general director of Al-Haq, Shawan Jabarin, and other members as ‘terrorists in suits’. These publications incited hateful comments including calls to kill Shawan Jabarin.https://t.co/wxcR55Mqrr

In addition to defamation and efforts to close funding channels for Palestinian CSOs, Israel has increased the use of visa rejection for international human rights activists and academics. As previously covered on the CIVICUS Monitor, vocal human rights defenders have been deported by Israel.

"The case offers the court an opportunity to weigh in on the government’s crackdown on human rights activism in Israel."

“Baseless attacks on the credibility of human rights and humanitarian organisations and moves by some states which curtail the organisations’ ability to carry out legitimate and essential work is of great concern.”

Amnesty International has joined a case brought to the Israeli Supreme Court by Human Rights Watch, challenging the legality of the Israeli government’s decision to revoke the work permit of @hrw's Israel and Palestine Director: https://t.co/zy2xju5tYX

As regularly covered by the CIVICUS Monitor, the Great March of Return protests in Gaza, that started on 30th March 2018, continue with the Israeli forces responding with the use of excessive force against unarmed protesters, causing serious injuries to hundreds, including women, children, paramedic and journalists. Additionally, the Israeli human rights CSO, B'Tselem documented the unlawful practice of Israeli security forces "making deadly use of crowd control weapons, including tear gas canisters which are not designed to hit people directly". B'Tselem's investigation found that this practice is "part of the open-fire policy Israel has been implementing along the Gaza border for more than a year." As reported below, in June 2019, a number of cases were documented of protesters suffering injuries from tear gas canisters fired by Israel forces.

From the beginning of the Great March of Return protests on Land Day, 30 March 2018 until the end of June 2019, Israeli security forces killed 216 #Palestinians, 43 of them minors, and wounded thousands, the vast majority with live ammunition #Gaza https://t.co/YACgH75OTZ

Monthly reports issued by local CSOs documenting violence against journalists reveal that in June 2019 journalists continued to face violations such as arrests, ban on freedom of movement, administrative detention and injuries during protests, committed by Israeli authorities.

For the month of June 2019, the the local media rights watchdog, Palestinian Center for Development & Media Freedoms (MADA) documented one violation committed by Palestinian actors against media and 28 violations committed by the Israeli authorities and security forces.

On the Palestinian side, on 10th June 2019, unidentified gunmen reportedly threatened the journalist Nizar Habash, the director of investigative journalism unit of “Watan” Network. The threat came after Nizar Habash published a press investigation on some allegedly harmful practices of a beauty salon.

On the other hand MADA documented several violations against Palestinian journalists committed by Israeli authorities in June 2019. MADA report includes the following violations:

Concerned with the arrest of the six journalists and the regular use of administrative detention without disclosure of evidence the RSF called on the Israeli authorities:

"[...] end to Israel’s obstruction of Palestinian journalists and [ensure] transparency in its judicial proceedings against them."

Internet restrictions also remain of concern. In May 2019, MADA reported of Facebook carrying out a "widespread closures" of Facebook pages, which included the closure of accounts and pages of 65 Palestinian journalists and authors based in the West Bank and Gaza.

Furthermore, according to the annual report of the Arab Center for the Advancement of Social Media, issued in March 2019, Israeli authorities arrested during 2018 around 350 Palestinians in the West Bank on charges of “incitement” because of their publications on social media.