Protests nationwide in Japan calling for reforms to anti-rape law 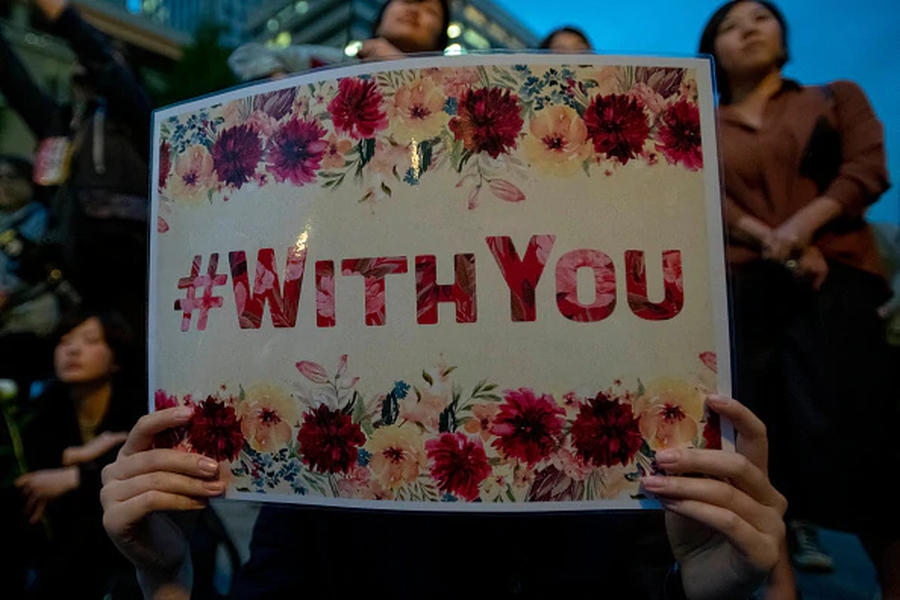 In the last few months, Japanese citizens have held protests against the problematic anti-rape laws and in support of the mass protests in Hong Kong. Women in Japan have also mobilised online against the requirement for women to wear high heels in the workplace.. A UN expert on freedom of expression has submitted a follow up report to the Human Rights Council on the failure of the Japanese government to implement recommendations he made in 2017 to improve freedom of expression including on media independence.

On 11th June 2019, survivors of sexual abuse and their supporters gathered in nine cities across the country to protest against the country's controversial anti-rape law. Protests occurred from Fukuoka in the south to Sapporo in the north and Osaka in western Japan. Organisers began holding the monthly protests in April 2019.

At the Tokyo protest, that took place in front of Tokyo station, protesters held signs such as “#MeToo” and “#WithYou,” urging reform of the law which places a high burden on rape victims discouraging them from coming forward. The law which was last revised in 2017, requires prosecutors to prove that violence or intimidation was involved, as well as the fact that the victim “fought back” against such threat. According to reports, recent acquittals of rape cases have revived outrage over that legal standard, which means that without evidence that the victim resisted, it is nearly impossible for prosecutors to prove rape.

Recent polls showed that only 2.8 percent of sexual assault victims report to the police in Japan, for the fear of being blamed themselves or publicly shamed.

On 13th June 2019, hundreds of people in Tokyo took to the streets in support of the millions of protesters in Hong Kong who are opposing the controversial bill introduced by pro-Beijing leaders, which would allow extraditions to mainland China. Protesters gathered in front of the Hong Kong Special Administrative Region government building in Tokyo’s Chiyoda Ward, chanting “Hong Kong, hang in there”.

One of the organizers of the protest, Jinshiro Motoyama, a former member of Students Emergency Action for Liberal Democracy (SEALDs), stated that their gathering aimed to encourage those in Hong Kong who share the same values of liberty, self-determination and democracy. This protest held in Chiyoda Ward was followed by another demonstration at Hachiko square, in Tokyo’s Shibuya district. Over 2,000 people gathered to support the Hong Kong protests and made speeches in Japanese, Cantonese, English and Mandarin.

On 27th June 2019, protests for Hong Kong were also held around the G20 summit in Osaka. Protesters in front of Osaka’s Namba Station held signs that said in English, “Save Hong Kong” and “President Trump, please liberate Hong Kong”.

Women protest requirement for high heels in the workplace

Meet the woman behind Japan’s #KuToo movement that sparked thousands to say no to mandatory heels at work #KuToo運動 pic.twitter.com/lzd8LoUGe7

In June 2019, a group of Japanese women submitted a petition to the government, signed by over 20,000 women to protest against the requirement for women to wear high heels and gendered dress codes at work. The #KuToo campaign, a play on words from the Japanese word kutsu, meaning shoes, and kutsuu, meaning pain, began online by female actor Yumi Ishikawa. The campaign speaks to the country’s deep-seated misogyny, gender roles, and workplace harassment in Japan.

In response to the #KuToo campaign, Japanese Health Minister, Takumi Nemoto, officially stated that such dress code expectations are “necessary and appropriate” in the workplace but declined to comment further. Shinobu Naito, deputy chief researcher at the Japan Institute for Labor Policy and Training (JILPT), stated that pumps and heels have been scientifically proven to increase health problems and the risk of accidents and that the mandatory dress codes to wear high heels can be considered a form of harassment.

Despite the success of the #KuToo campaign, Ishikawa’s growing public prominence has made her the target of online attacks, particularly by men.

UN Special Rapporteur recommendations yet to be implemented

In June 2019, UN Special Rapporteur on the Promotion and Protection of the Right to Freedom of Opinion and Expression, David Kaye, presented his report at the UN Human Rights Council in Geneva following up on recommendations that he had made to Japan in 2016, as previously documented on the CIVICUS Monitor.

During the 2016 visit, the Special Rapporteur identified significant concerns regarding the independence of the media and its role as a public watchdog committed to investigative journalism; the manipulation of media outlets through an opaque and clique-based system of press clubs and the impact of secrecy laws on the public’s right to information. He made several recommendations including the repeal of Article 4 of the Broadcast Act to strengthen media independence, as well as the removal of the legal basis for government interference on media.

However, in the recent report, he pointed out that many of his recommendations were not implemented yet. The Special Rapporteur also raised concerns about continued restrictions on protesters in Okinawa who were involved in peaceful protests against the expansion of military bases there.

Human Rights Now (HRN) welcomed the follow-up report of the UN Special Rapporteur, pointing out that the government has not taken any step to revise Article 4 of the Broadcast Act or to create an independent broadcast regulator as recommended. This, HRN says, invites continued harassment of broadcasters. HRN also stated that the Specially Designated Secrets Act has also not been revised as recommended, allowing “secrets” to continue to be defined too broadly, which seriously deters rights of access to information.

HRN also highlighted how the government uses the press club to harass and silence journalists who challenge the government’s narrative. Tokyo Shimbun reporter Isoko Mochizuki has been the target of such harassment. The government official serving as the chair of the Chief Cabinet Secretary’s press club frequently intervenes when Mochizuki raises questions, and she has also been one of the targets of the series of intimidating warnings sent by government to media companies to pressure journalists.