Argentinians have continued mobilising to protest against economic policies 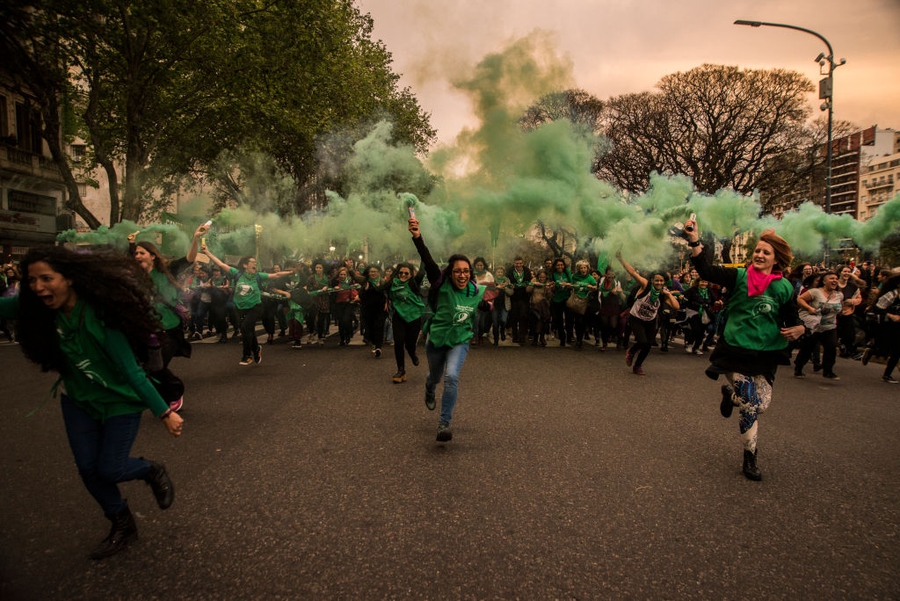 Argentines raise the banner of protest against Macri - https://t.co/7mWVnr435d
On April 4, with the slogan of “Argentine unity, production and work”, thousands of citizens and members of several trade unions and social organizations gathered on the streets of Argentina. They ...

Since the beginning of 2019, people in Argentina have mobilised against the economic policies of the government of President Mauricio Macri. Protests have taken place in a climate of social unrest as the government is "determined to reach a zero fiscal deficit as part of its US$56-billion bailout agreement with the International Monetary Fund."

In April 2019, thousands took to the streets in Buenos Aires in a protest organised by several trade unions and social activists. One of the protesters stated:

"We come out to protest the hunger-creating policy of our government and we come to protest peacefully in the streets, repudiating those rate increases and all the questions of what the government is doing to the people, imposing hunger on them, oppressing them."

In a separate incident, on 28th May 2019, on the International Day of Action for Women’s Health, the National Campaign for the Right to Legal, Safe and Free Abortion presented a draft of the Voluntary Termination of Pregnancy (IVE) bill before the House of Representatives of the Argentine National Congress. On the same day, thousands of women, and supporters mobilised in support of the bill. The pañuelazo or  'march with a green handkerchief', which represents the feminist struggle for legal abortion, was held in more than 100 cities in Argentina and abroad.

In June 2018, as reported previously on the Monitor, the bill was approved by the House of Representatives. However, in August, the Senate rejected the bill. The new bill has been modified, taking into account last year’s parliamentary debate around it, as well as the discussions that took place with women and women’s movements in different regions of the country.

On 3rd June 2019, on the fourth anniversary of the formation of the Ni Una Menos movement, tens of thousands of women, lesbians, bisexuals, transgender and queer people marched from the Argentine National Congress to Plaza de Mayo in Buenos Aires. The mobilisation called for an end to gender-based violence, the approval of the new Voluntary Termination of Pregnancy (IVE) bill and the implementation of the Law on Comprehensive Sexual Education (ESI).

Press freedom organisations issued a statement in defence of journalists Daniel Santoro, Rolando Graña, Eduardo Feinmann and Rodrigo Alegre of Channel 13 after they were named in an investigation related to alleged extortion and illegal espionage carried out by the fake lawyer Marcelo D'Alessio.

According to the judge in charge, interviews conducted in December 2018 by the four journalists with the former director of the oil company PDVSA Argentina, Gonzalo Brusa Dovat, would have been coordinated by D'Alessio as a manoeuvre to force the businessman to testify in the criminal case known as the "corruption notebooks” scandal, which involved former president Cristina Kirchner. D'Alessio was allegedly acting on behalf of federal prosecutor principal investigator of the "notebooks scandal".

In the joint statement, press freedom organisations stated that linking the journalists to D'Alessio's case is a judicial attempt to "criminalise interviews and professional secrecy" and that "journalists never can nor should be confused with their sources."

According to the findings of the Media Ownership Monitor (MOM), presented on 10th April 2019, leading media outlets in Argentina are in the hands of only a few companies. According to the study the "four largest conglomerates determine what the vast majority of 44 million Argentinians watch, read and listen to". The research states that the current economic crisis, the absence of state policies to reduce its effects and the legislation favouring large media holdings has led to smaller media outlets shutting down and media workers losing their jobs, thus limiting critical journalism and the right to a plurality of opinions.