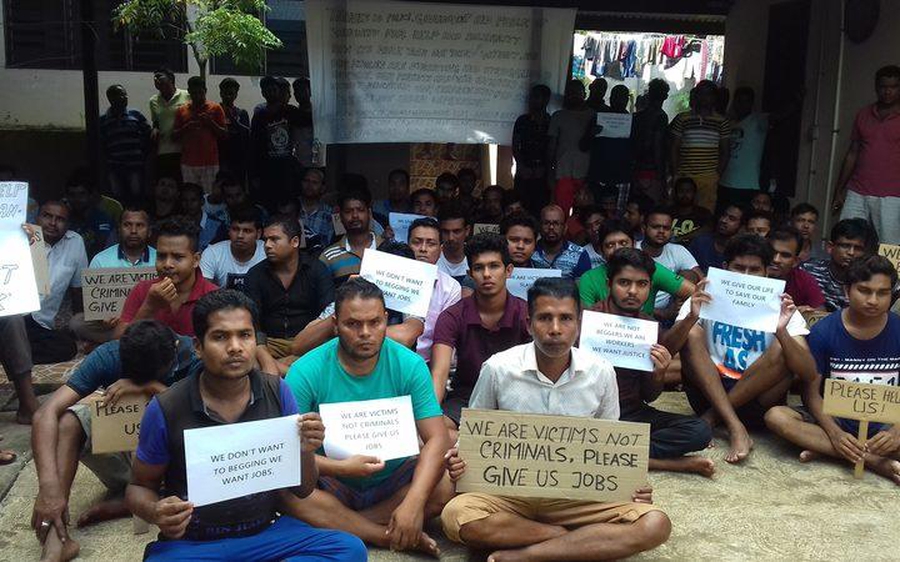 Dozens of migrant workers from Bangladesh who were trafficked to Vanuatu are protesting plans to repatriate them as they fear for their lives if they return home.

According to media reports in March 2019, around 101 migrants who arrived in the Pacific island nation over the course of the last two years say they were promised decent work but ended up being exploited by their employers, who were arrested in November 2018 on trafficking charges. Once the migrants landed in Vanuatu, they were forced to work at a construction site building a market, subjected to beatings, and denied the salaries they were promised.

Victims say they were promised construction work in Vanuatu paying up to USD 5000 per month. Many paid as much as USD 25,000 to get there, borrowing from relatives and banks and mortgaging their homes in the process. Shaheen Khan one of the trafficking victims says he, like many others, fears he will be killed by loans sharks if he returns to Bangladesh. He said: "If we go back now, what will we do? We have nothing to do except commit suicide, kill ourselves because people will kill us because we have to pay the money".

Four Bangladeshis charged with trafficking are currently being tried in Vanuatu. Vanuatu's interior minister, Andrew Soloman Napuat, told the media in March 2019 that the government would wait for a court decision before taking any steps to repatriate the group.

The migrants said they are stuck in limbo as they are witnesses in the case against their traffickers, but lack the right to work. Several said they would like the chance to earn money in Vanuatu instead of being returned home in the future. Only 14 are reportedly willing to return voluntarily.

Anne Pakoa, head of the Vanuatu Human Rights Coalition, said the migrants barely had enough to eat and that pre-existing medical conditions including diabetes were going untreated. She also slammed key development partners for failing to step up to assist the government to meet the needs of the victims.