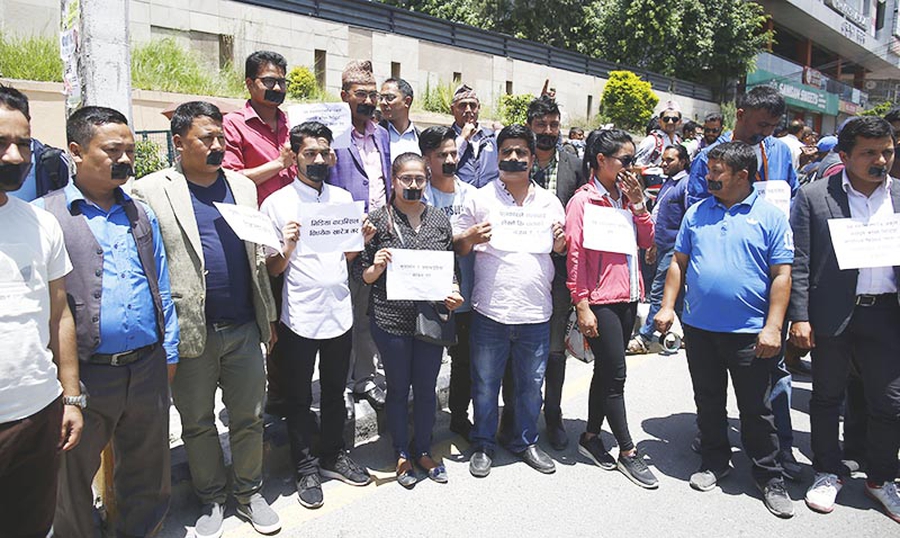 In recent months, journalists have continued to be investigated and threatened for their reporting. In February 2019, a new Information Technology bill was introduced that threatens freedom of opinion and expression on social media. In May 2019, the government introduced a Media Council bill that could undermine press freedom in the country. Civil society is also concerned that amendments to the National Human Rights Commission Act, proposed in April 2019 could weaken its role in ensuring justice for victims of human rights violations.

Journalists in Nepal have continued to be arrested or threatened for undertaking their work:

Freedom Forum, a Nepali rights group, recorded 98 violations of freedom of expression in 2018, compared with 66 in 2017, including threats and attacks by interest groups, and arbitrary arrests. Freedom Forum reported increased constraints on the media under the KP Oli government, including pressure to self-censor material critical of the government.

According to HRW, since Prime Minister KP Oli office in February 2018, at least six journalists including Arjun Giri have been detained under the Electronic Transactions Act. Section 47 of the Electronic Transactions Act prohibits electronic publication or display of material deemed illegal under existing laws, including vaguely defined material “which may be contrary to the public morality or decent behavior or any types of materials which may spread hate or jealousy against anyone or which may jeopardize the harmonious relations subsisting among the peoples of various castes, tribes and communities”. It authorises a sentence of up to five years in prison and a 100,000 Nepali rupee (USD 900) fine. Dozens of reporters and editors have been arrested, detained and fined in the last decade under the law.

On 23rd May 2019, 12 editors of media outlets in Nepal issued a joint press statement urging the government to withdraw the Media Council Bill. They urged the government to undertake a proper consultation with stakeholders saying that the bill was "against democratic norms and values and spirit of the constitution". The Federation of Nepali Journalist (FNJ) have also come out to oppose the bill

The Media Council Bill, which would replace the existing Press Council Act, was introduced to parliament on 9th May 2019. According to the Committee to Protect Journalists (CPJ) the authorities bypassed a consultation phase in which the public could comment on the bill.

According to reports, Article 10 of the bill eliminates the principle of press independence outright by saying that “the president and members of the Media Council will be directly appointed by the government,” which can “remove the president and members at any time”. Section 17 of the bill would effectively increase the government's control over issuing and suspending press accreditation and Section 18 of the bill, which grants the media council the ability to impose fines for damaging a person's reputation, would enable any individual to file a complaint against a journalist, even if the individual was not personally affected by the journalist's reporting.

Fines range from 25,000 to 1 million Nepalese rupees (USD 233 to USD 8,927) against journalists and media outlets it determined to have damaged a person's reputation and sentences of up to 15 years in prison in the event of non-payment.

According to reports, Section 94(1) of the Bill, attempts to impose restrictions on freedom of opinion and expression on social media. The law reportedly criminalises online content that undermines “the sovereignty of Nepal, geographical integrity, national security, national unity, independence, dignity or national interest” among other things. It also criminalises the communication of “any message with the intention of teasing, misleading, insulting, discouraging, threatening, creating hatred and enmity, or confusing the receiver” and defamation online. If any content violates Section 94(1), the provisions empower the Department of Information Technology to issue directives to any social network operator to immediately prohibit publishing of all content.

Human rights groups have raised serious concerns about the bill saying it violates freedoms enshrined in the Constitution. Executive Director of Freedom Forum Taranath Dahal said the government had put forward the bill “with the motive of curtailing citizens’ freedom of expression”. He said there were separate laws to deal with harassment, defamation and national security. Further, he said the bill failed to recognise the fact that defamation should not be criminalised.

According to the Asian NGO Network on National Human Rights Institutions (ANNI), in Article 18 of the proposed bill, the NHRCN would require consent from the Finance Ministry to accept additional financial resources for it to carry out human rights related activities. ANNI said that “such requirement may pose a threat to the independence of the Commission, as it provides room for the Government to interfere in the financial autonomy of the NHRCN”.

The amendment bill will make it mandatory for the NHRCN to recommend its investigated cases to the Attorney-General whi will decide whether to file case against human rights violators or not. There are concerns that this would disempower the Commission’s protection mandate and potentially enhance a culture of impunity within the country.

Moreover, the amendment bill has dismissed Article 26 (B) of the Act, which provides the legal basis for the creation of the regional and sub-regional offices of NHRCN. This will seriously undermine the ability of Nepalis who live outside Kathmandu to gain access to the commission and will therefore weaken the protection of most Nepalis’ human rights.

ANNI called on the Parliament to "reject the amendment bill and ensure its revision so that it does not contravene with the Constitution of Nepal, the Supreme Court’s decision and the Paris Principles".