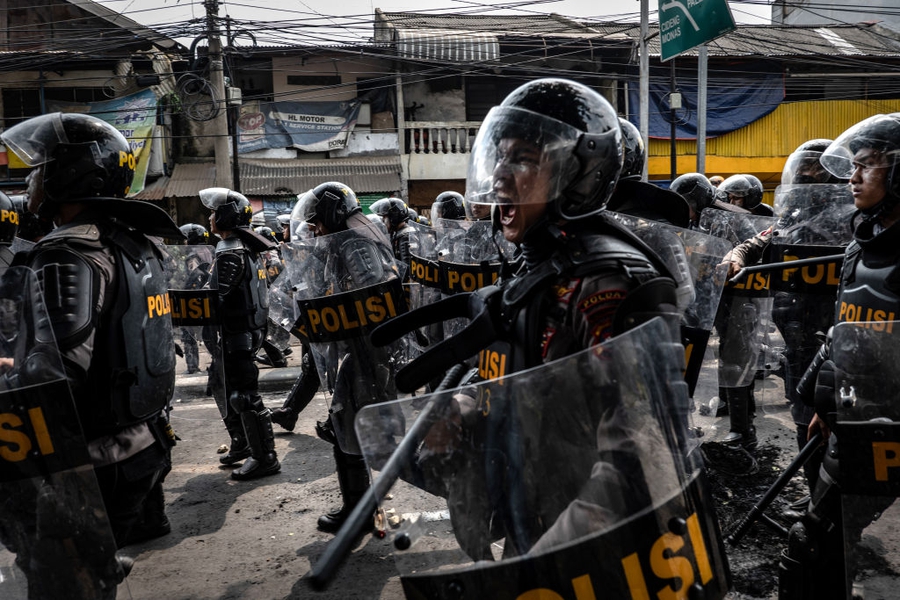 On 21st May 2019, Indonesian president Joko Widodo won a second term as leader of the world's third largest democracy. Joko Widodo - known as Jokowi - won 55.5 percent of the vote in the April 2019 general election while his longtime rival Prabowo Subianto took 44.5 percent, according to the General Elections Commission.

In the lead up to the elections, civil society called on the candidates to put forward a concrete action plan for the next government and parliament to deliver on human rights. They called on the new government to address impunity by security forces, strengthen the civic space for human rights defenders, review defamation laws, address the targeted attacks against religious minorities and intimidation and discrimination of LGBTI people.

The election results sparked violent protests in the capital Jakarta on the 21st and 22nd of May by supporters of Prabowo who alleged that the poll was marred by widespread fraud – a claim his team has yet to produce compelling evidence to support. The protests left at least seven people dead and hundreds injured. According to media reports, protesters threw rocks, molotov cocktails and burning projectiles and set fire to a police dormitory and vehicles. Police responded with tear gas, water cannons and rubber bullets. Police claim the protests were not spontaneous but appeared to have been designed to create chaos.

In the last few months, as documented below, there have been ongoing reports of civic space violations by the Indonesian authorities including attacks on peaceful protests by West Papuan activists, a conviction for criminal defamation, banning of a film for its LGBT content and the criminalisation of a human rights defender for allegedly criticising the military.

On 26th May 2019, seven civil society organisations, the Indonesian Legal Aid Foundation (YLBHI), the Commission for Missing Persons and Victims of Violence (KontraS), Legal Aid Institute (LBH) Jakarta, Indonesian Alliance of Journalist (AJI), Lokataru Foundation, Amnesty International Indonesia and LBH Pers reported on an initial investigation they had undertaken into the violent protests on 21-22 May 2019, where they found indications of a range of human rights violations. The report states that at least four of the seven people who had been killed, suffered gun shot wounds and that both sides of the political divide had incited and used provocative language that fueled the tensions during the protests.

According to the report, police were involved in arbitrary arrests and had used unnecessary force to disperse the protesters. In a number of locations, tear gas was fired arbitrarily at crowds without specific efforts to arrests the perpetrators of violence, in violation of police regulations. Other violations documented include the failure by the police to assist protesters that had been injured and alleged police brutality during arrests and when the protesters were being transported to the police stations. Some protesters were also ill-treated as they were unnecessarily dragged on the road by the police after they had been arrested.

The CSOs also reported that in many cases the protesters families were not informed about their arrests and feared they had gone missing. Some bystanders had also been wrongfully arrested. There were also violations of due process during arrest and detention that were inconsistent with the Indonesian Criminal Procedure Code. At least three medical officers suffered injuries after they were allegedly ill-treated by the police and their vehicle damaged.

At least 20 journalists suffered injuries while covering the protests perpetrated both by the police and protesters. Some were beaten, slapped, intimidated or threatened, had their equipment confiscated. Others were blocked from reporting, had their video recordings destroyed, attacked with rocks and their vehicles burned. On 23rd May 2019, Reporters Without Borders (RSF) also reported attacks against journalists. The civil society groups also criticised the restrictions on social media including Facebook and Whatsapp to stop misinformation and argued this was in violation of the Constitution and international human rights law.

The CSOs called on the authorities including the National Human Rights Commission to undertake further investigations of the police actions during the violent protests and to make their findings public. They also called for transparency from the authorities on those arrested and on the numbers of victims.

Protest against elections by Papuan activists attacked and forcibly dispersed

On 7th April 2019, police and vigilante groups attacked and forcibly dispersed a group of West Papuan university students in Malang City, East Java province. According the Asian Human Rights Commission (AHRC), the students had organised a peaceful public protest in front of the Town Hall in Malang City calling on voters to boycott the elections. A vigilante group made its way to the city hall, followed by several police vehicles. When they arrived at the town hall, the mob began forcibly removing protesters from the demonstration and pushing them towards the city hall fence. The police then claimed that a banner the protesters were carrying which had the wording “Abstain from Voting” was a criminal offence.

Subsequently, police officers in uniform and wearing pain clothes attacked the protesters, beating and kicking them as well throwing stones at the protesters. They also threw coffee mixed with chilli powder at the protesters. The protesters were then forcibly detained and taken to the Landungsuri bus terminal. Protesters suffered various injuries including wounds on their face and body as well as broken teeth due to the attack.

In a separate incident, on 15th April 2019, police dispersed and arrested West Papuan university students in Bali who also protesting against voting for any of the candidates for the elections. While they were marching police blocked them and confiscated their banners and posters and physically assaulted them. They were then detained and interrogated by the police for violations of ‘public order’.

There have been long standing grievances by West Papuan groups due to the exploitation of land and resources and serious human rights violations in the eastern-most region of Indonesia. Over the decades, the Indonesian security forces have responded brutally with reports of unlawful killings and unnecessary and excessive use of force and firearms during peaceful protests and gatherings.

Jailed for defamation for Whatsapp messages

According to Human Rights Watch, on 26th February 2019, the court sentenced Syamlan to 10 months in jail for defamation for allegedly sending four WhatsApp messages to two banks regarding a company’s performance. She denies sending the messages. The WhatsApp messages are four short sentences, in Javanese language, sent on June 2017, separately to two bankers in Jakarta – Eximbank Indonesia and Bank Negara Indonesia officials – that questioned the credibility of Pista Textile, a well-known textile company.

Syamlan acknowledged that the number apparently used to send those messages was hers but said that she no longer had the phone. She said that it had been broken and that she had lost it in April 2017. She said she had used a new phone with a different number after that.

In March 2018, the police nevertheless charged Syamlan with criminal defamation. Her trial took place between October 2018 and February 2019. On 26th February 2019, the Surabaya district court found Syamlan guilty of defaming Pisma Textile under the 2016 Electronic Information and Transactions Law (ITE Law) and sentenced her to 10 months in prison and a fine of IDR 5 million (USD 355). She is still free on appeal.

The ITE law carries a maximum sentence of six years’ imprisonment and/or a fine of up to one billion rupiah (around USD 66,700) for any person who deliberately and without right disseminates information aimed at inflicting hatred or hostility. It has been used to prosecute individuals who use social media or other online platforms to criticise or ridicule abstract entities such as religion or “state ideology”. The vague and overbroad legislation has often been used to arrest, prosecute and punish persons for peacefully exercising their freedom of speech.

Indonesian film Kucumbu Tubuh Indahku (Memories of My Body) is winning awards & accolades overseas. But at home, few people may get to see it. The film has passed censors, but local officials banned it due to the LGBT content. https://t.co/GJEP2Vw5Eo

The Indonesian film “Kucumbu Tubuh Indahku” (Memories of My Body) has been banned in a number of cities in Indonesia, due to its LGBT content. Although the Film Censorship Board (LSF) approved the film, local Islamist leaders from Java to Kalimantan and Sumatra have effectively prevented its screening. The film covers a period in the late 1960s, when General Soeharto came to power and the army and anticommunist militias killed more than one million left-leaning activists. The main character in the film is a boy named Juno, who is gay.

The film was released in Indonesian theaters on 18th April 2019, but local government officials immediately banned it in Depok, Bekasi, Garut, Bogor (West Java), Palembang (South Sumatra), Pontianak and Kubu Raya (West Kalimantan), as well as Balikpapan (East Kalimantan). The ban came after three petitioners used change.org to ask the government to ban the film, apparently on the basis of the movie’s trailer, contending that it was an “LGBT-promoting” film. The local authorities subsequently cancelled screenings in their cities.

As documented previously, Indonesia has been engulfed by a government-driven moral panic about gender and sexuality. Beginning in early 2016, politicians, government officials, and state offices issued anti-LGBT statements – calling for everything from criminalisation and “cures” for homosexuality, to censorship of information related to LGBT individuals and activities.

In March 2019, Robertus Robet, academic and human rights defender, was accused of insulting an authority or a public institution under Article 207 of Indonesia’s Criminal Code (KUHP). The charges relate to a speech he gave during a peaceful protest on 28th February 2019 in front of the Presidential Palace. In the speech he compared the plan to place military officials in other government institutions to the ‘New Order era’ (1966 – 1998) when Indonesia was under a military-backed government and sang a song critical of the military from that period.

“This is a blatant and ludicrous attempt to intimidate and silence Robertus for his peaceful criticism of the military. He is an academic who is guilty of nothing more than voicing his views over proposals to place senior military officers in positions of power within the government.”

Robertus was one of the pro-democracy activists who, alongside students, fought to topple then-president Suharto in 1998. He has actively campaigned for military reform since then. He is also a co-founder of Amnesty International Indonesia.

But please don’t forget about Simon Magal. His story is also important. A student who wanted to continue his study abroad. He said to me: “I trust God and surrender myself to him” He looked more depressed than Skrypsi. Magal is the nephew of Yosepha Alomang, please google. pic.twitter.com/MCRnQHeNj1

On 2nd May 2019, a Papuan student activist Simon Magal was sentenced to four years imprisonment after the courts found him guilty of plotting against the state with separatist activists in the easternmost province of West Papua. Magal was detained on 1st September 2019 in connection with the arrest of Jakub Fabian Skrzypski a Polish man who was detained in Wamena on 26th August 2019.

Skrzypski had initially been accused of discussing an arms deal in a meeting with a separatist leader, though the court found insufficient evidence to pursue this charge. They were both subsequently charged for treason under Article 106 of the Criminal Code, which carries a maximum sentence of life in jail. Skrzypski was sentenced to five years. It was the first time the treason law had been used against a foreigner. According to the prosecution, Skrzypski had been communicating with Simon Magal on social media about spreading propaganda on independence to Europe and later met him in person.

The provisions on treason (106 and 110) in the Criminal Code has been systematically used to silence and jail peaceful pro-independence activists in West Papua.