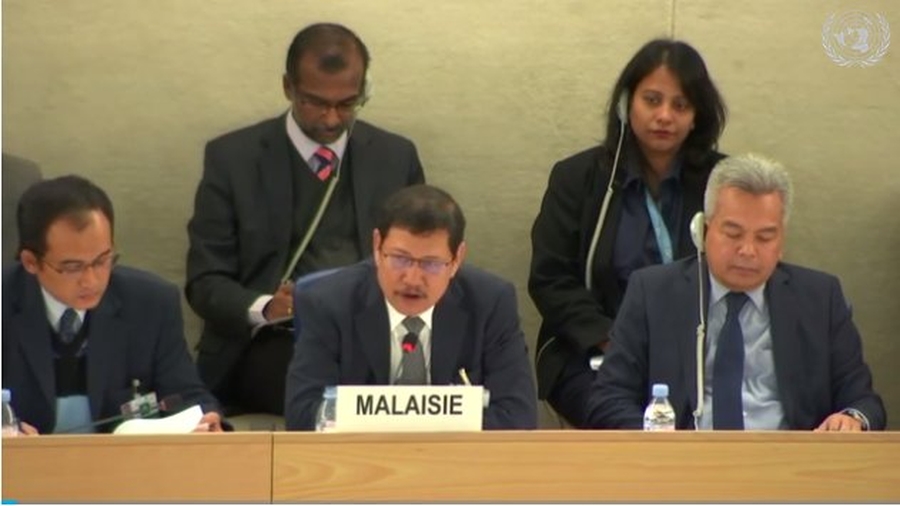 On 8th November 2018, Malaysia underwent its third Universal Periodic Review (UPR) of its human rights record at the UN Human Rights Council (HRC). During the review the government reiterated its commitment to ratify six international human rights conventions including the International Covenant on Civil and Political Rights (ICCPR). The government also committed to conduct half-yearly reviews to keep track of the progress on implementation of UPR recommendations.

Malaysia received 268 recommendations from 111 state delegations. Among the recommendations include calls to repeal or amend existing laws that limit fundamental freedoms such the Sedition Act, the Communications and Multimedia (CMA) Act, the Printing Presses and Publication Act, the Official Secrets Act and the Anti Fake News Act. States also called on Malaysia to continue efforts to create a safe and enabling environment for the media and civil society. Malaysia is expected to examine the recommendations and provide responses before the 40th session of the council in March 2019.

In what is seen as a regressive step, on 22nd November 2018, the government said it would not ratify the International Convention on the Elimination of All Forms of Racial Discrimination (ICERD) after protests from the opposition and right wing ethnic Malay groups claiming that the convention will remove Malay privileges.

Government lifts moratorium on use of repressive laws

In a move criticised by civil society, the government, on 3rd December 2018, decided to lift a moratorium on the use of repressive laws - including the Sedition Act and Section 233 of the Communications and Multimedia Act 1998 (CMA) - to deal with cases “involving threats to public order, national security and race relations”. This was in response to violence near a Hindu temple in late November 2018. Four people are reportedly being investigated under the draconian Sedition Act.

National Human Rights Society (Hakam) secretary-general Lim Wei Jiet voiced his concern over the use of repressive laws and urged the government to abolish them. He said:

“The Sedition Act 1948 and Section 233 of the CMA are phrased too arbitrarily and have been opened to abuse many times under the previous regime...it was for this reason that Pakatan Harapan's manifesto promised to abolish these laws. Hakam, therefore, urges the government to stand firm with its manifesto promises, respect human rights and to uphold the rule of law.”

On 12th November 2018, the Ipoh High Court upheld the conviction against activist and artist Fahmi Reza under the Communications and Multimedia Act (CMA) 1998 for publishing a clown caricature of the former prime minister Najib Razak on social media in 2016 and criticising Najib Razak for his involvement in a corruption scandal involving billions of dollars. His controversial clown caricature is regarded as one of the main symbols of defiance against the previous government, which lost the elections in May 2018.

As documented previously, Fahmi Reza was convicted and sentenced to a month’s jail and fined RM30,000 (USD 7,600) on 21st February 2018. He was prosecuted under the Communications and Multimedia Act which has been systematically misused to criminalise online criticism or satire against the government. It was reported that judicial commissioner, however, commuted Fahmi Reza’s sentence and reduced his fine from RM30,000 to RM10,000 (USD 2,500).

N. Surendran, the advisor of Lawyers for Liberty criticised the decision saying:

“The court’s decision is surprising and disappointing and is contrary to Article 10(1)(a) of the Federal constitution which guarantees freedom of speech and expression. The decision fails to give effect to the public’s basic right to criticise or comment upon political matters through pictorial representations or images or caricatures…Hence, this decision sets a dangerous and bad precedent and is a serious setback to democratic discourse in the country.”

In a separate charge related to his caricature, the Kuala Lumpur Sessions Court, on 11th October 2018, dropped the case against Fahmi Reza from charges under the CMA, after the prosecution, withdrew the charges against him. Fahmi was charged with creating false content on Instagram in February 2016  "with the intention of annoying another person's feelings".

The Communications and Multimedia Minister Gobind Singh Deo has publicly committed to amend the CMA and do away with certain provisions in the CMA that are deemed a threat to free speech.

Arul PSM ' Looks like PDRM has a lot of time, where in all peaceful assembly after Malaysia baru, the police make a report themselves, and they investigate themselve'. PC responding to OCPD DANG WANGI decision to investigate Bantah 1050 memorandum to Kula event. pic.twitter.com/CSFU1WtF0L

“The authorities intimidate human rights activists by calling in the rallies’ participants…I have been questioned three times after the new government was formed. Latest, I was summoned to Dang Wangi district police headquarters to give my statement.”

Meanwhile, political activist S. Arulchelvan said "the act of intimidation against human rights activists by the new government was no different from what was done by the previous regime". He said that the authorities were investigating peaceful assemblies even though they have been given the notice as requested.

A new report by Amnesty International, released on 29th November 2018 highlights how indigenous communities across Malaysia face relentless harassment, intimidation, arrest, violence and even death as they peacefully resist attempts to force them off land they consider ancestral land.

The report, “The Forest Is Our Heartbeat:” The Struggle to Defend Indigenous Land in Malaysia, documents the countless obstacles faced by members of indigenous communities and those who advocate on their behalf across the country.

The report shows how the murder of the indigenous activist Bill Kayong – a vocal advocate for indigenous peoples’ land rights who was gunned down in broad daylight in Miri in June 2016 – came amidst a wider climate of violence, intimidation and harassment faced by human rights defenders in Sarawak.

People described as ‘gangsters’ armed with swords or other weapons have been found to confront, harass and physically attack community leaders and activists with impunity. Other people Amnesty International spoke to told how police, government officials and agencies have threatened, arrested and investigated community members and human rights defenders across Malaysia. State authorities have demolished peaceful blockades of communities seeking to protect their land claims.

“In a significant number of cases we’ve heard, the Malaysian government has failed to adequately investigate the human rights violations reported by communities…In cases of attacks, assaults and threats by people described as ‘gangsters’, witnesses told us that the police showed shocking indifference.”

The report outlines some clear areas for action. These include strengthening and expanding legal and policy protections for human rights defenders, to ensure they can work safely and free from harassment. Amnesty International also called on the government to carry out prompt, thorough and impartial investigations into attacks, threats and assaults against human rights defenders.

On 18th October 2018, the Human Rights Commission of Malaysia (SUHAKAM) issued a statement criticising the decision of the state government of Sarawak to retain a travel restriction on human rights commissioner, Jerald Joseph.

“In the context of Malaysia's democratic transformation, every citizen shall enjoy the right to freedom of movement, and we call on the state government of Sarawak to immediately lift the travel ban on Jerald Joseph.”

Jerald, a human rights activist has been banned since 1998 from entering the state due to his protest over the construction of the controversial Bakun dam, the country’s biggest hydro-electric project.