Neo-nazi movement appeals a ban on its activities 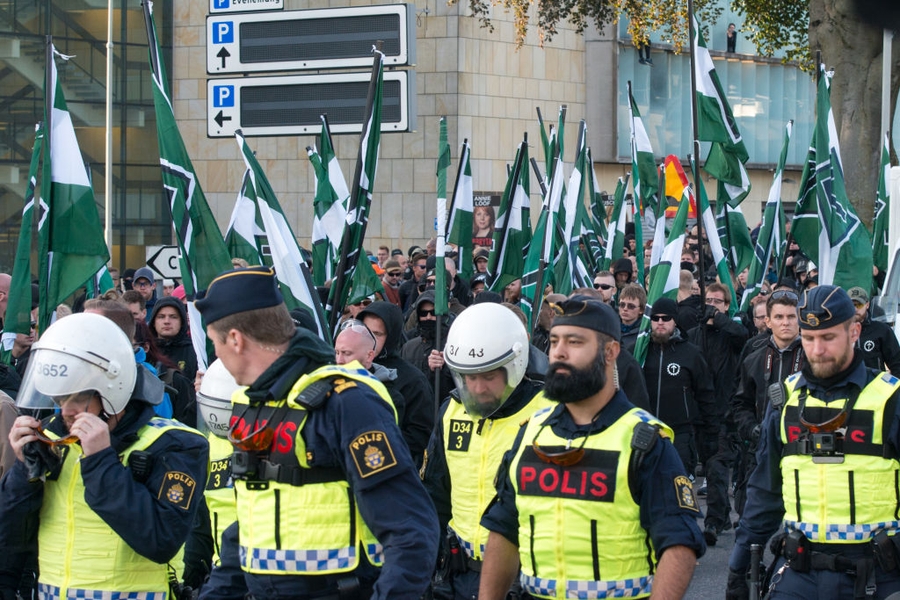 The NRM is present in several Nordic Countries: NRM protestors during a 2017 protest in Sweden (Photo: Getty Images)

The neo-Nazi Nordic Resistance Movement (NRM) has appealed a ban on its activities in Finland issued by the Pirkanmaa District Court in November 2017. At that time, the CIVICUS Monitor reported that a district court banned the organisation because it used violence and encouraged hate speech among its supporters. The court also ruled that the association's activities were not within the scope of protection under the right to freedom of association, as the NRM violates other fundamental human rights. The Court's decision also abolished the Northern Tradition Association which is affiliated with NRM. During the case, police described the NRM as a militant extremist organisation with the aim of overturning the rule of law through the violent revolution.

The Turku Appeal Court began hearing the NRM's appeal on 28th August and is expected to deliver a verdict by the end of September.

The movement, known as Pohjoismaisen vastarintaliikkeen, or PVL, in Finnish, has been in existence in Finland for around ten years. According to the police, it has between 80 to 85 members. The case is considered exceptional as it has been fifty years since an association was banned in Finland in the 1970s, when four national socialist organisations were banned.

In the lead up to the appeal on 28th August, hundreds marched in Turku some of them supporters of the NRM, some to protest the NRM, demanding it be banned. (see below)

Today, @HRC joins thousands in protest at the #HelsinkiCalling rally in Finland ahead of the Trump-Putin summit to call out the Trump-Pence and Putin regimes’ dangerous attacks on LGBTQ people. #EyesOnChechnya pic.twitter.com/9mjvUxz5pI

On 15th July 2018, an estimated 2,500 people took part in the "Helsinki Calling" march to protest against the actions of US President Donald Trump and Russian President Vladimir Putin, a day before the two leaders held a summit in the city. Protestors chanted slogans and carried banners calling for peace, respect for human rights and a welcome for refugees. "Helsinki Calling" participants marched from Kaisaniemi Park to the Senate Square.

In all, Finnish authorities expected over fifteen individual protests during the summit, including at least one pro-Trump protest organised by the right-wing Finns Party.

Separate demonstrations in Turku on anniversary of terrorist attack

On 18th August 2018, the first anniversary of deadly knife attacks that claimed the lives of two victims and injured eight others, the neo-Nazi Nordic Resistance Movement (NRM) gathered hundreds of supporters for a procession through the streets of Turku. In June 2018, a Finnish court adjudged the attacks to be Finland's first ever terrorist attack, and found Moroccan asylum seekerAbderrahman Bouanane guilty of two counts of murder and eight counts of attempted murder with terrorist intent.

NRM marchers joined a chant calling for freedom of speech and named individuals whom they said were traitors to the people, including President Sauli Niinistö, Foreign Minister Timo Soini and Foreign Trade and Development Minister Kai Mykkänen. Having decided not to hold any official commemorative events on that day, the Mayor of Turku, Minna Arve, said:

"We will honour the victims and people who helped by working every day with other officials and with civil society to improve security, cultural understanding and the integration of immigrants."

Onlookers along the route booed and tossed items including banana peels at the NRM marchers. Separately, several hundred supporters of the group "Turku without Nazis" made their way into the city centre to chants of "Turku belongs to everyone - except Nazis," a sentiment echoed by many speakers who had addressed the crowd ahead of the procession.