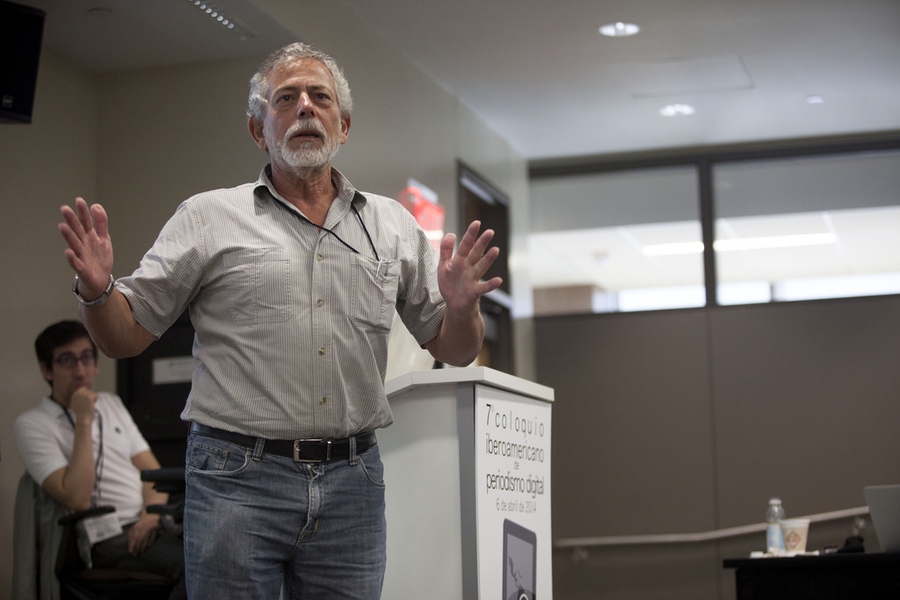 Gustavo Gorriti, of IDL-Reporteros, speaks at the University of Texas-Austin, Apr. 6, 2014. Martin Do

Since 7th July 2018, investigative journalism site IDL-Reporteros began to publish a series of articles revealing alleged acts of corruption in the Peruvian judicial system involving supreme judges, ministers, members of Congress, business-people and journalists. The report entitled “Corte y Corrupción” (Court and Corruption) was the first one of the series of articles and it was published after the reporters heard several telephone wiretap recordings that they received from anonymous sources and were later verified by the organisation.

A few days after the publication was issued, on 10th July, a prosecutor arrived at the offices of IDL Reporteros to request the materials used in their coverage of alleged government corruption.  According to IDL´s director Gustavo Gorriti, the prosecutor arrived without any warrant, and therefore the visit was suspended. Following this visit, over the course of a few days, authorities demanded three times that the news site reveal its sources and deliver material from its most recent investigation.

In addition, on 12th July 2018, journalists Gustavo Gorriti and Rossana Cueva director of the TV program "Panorama" on the Panamericana Television media outlet, who also disseminated the corruption piece, were summoned to an Extraordinary Session in Congress. Both journalists decided not to attend. Gorriti also added:

Since IDL-Reporteros began publishing its investigation, at least nine officials have resigned from their positions, according to El Comercio. Among them are the Minister of Justice, Salvador Heresi, the president of the Judicial Branch, Duberlí Rodríguez, the president of the Superior Court of Justice of Callao, Walter Ríos, and four of the seven councilors from the National Council of the Magistrature (CNM).

National and foreign journalists, media organisations and civil society have shown their support and solidarity with IDL Reporters. The Special Rapporteur for Freedom of Expression of the IACHR, Edison Lanza, recalled that "the confidentiality of sources is an essential element of the work of a journalist and of the role that society has conferred on journalists to report on matters of public interest".

It was reported that on 15th July the Prosecutor Office decided to rescind its request to the journalists to reveal their sources.

In the province of Manu; the harakbut indigenous community was forced to leave their homes after being subject to harassment and death threats by illegal miners. According to Federación Nativa del Río Madre de Dios y Afluentes (National Federation of the Madre de Dios River, FENAMDA), this happened after a police operation against illegal mining at the beginning of June 2018 where authorities found non-authorised machinery performing deforestation work. Althought a few people were arrested during this operation, they were later released.

In a separate incident, on 20th July 2018, the president of rondas campesinas (peasants patrols), Isaac Huamán, was threatened after the organisation issued a public statement on 10th July to reject the development of the Río Branco mining project in the community. Huamán stated that a few days after the statement was issued, two men went to his home and intimidated his family. One of the man reportedly said: "you don't know who you are dealing with".