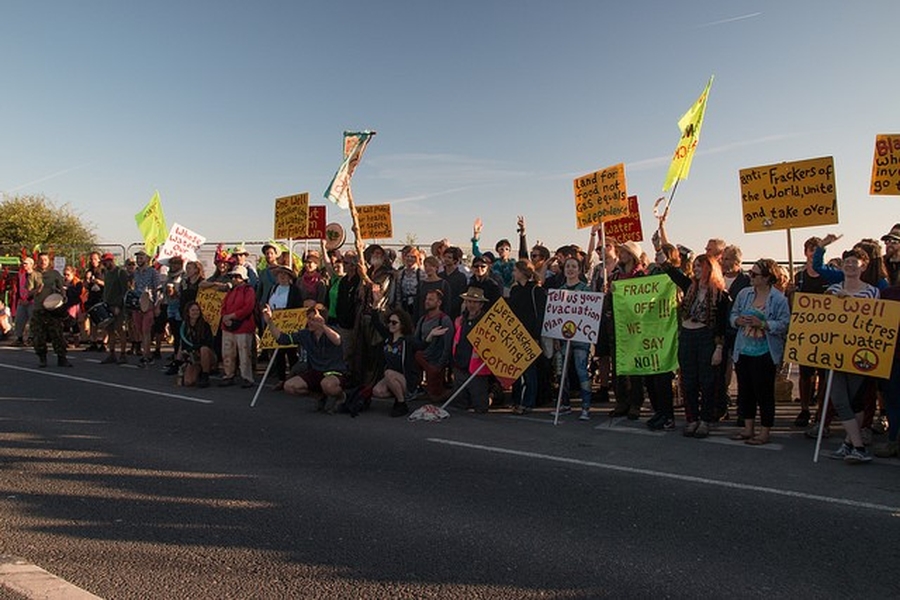 Breaking news: last month we took the Information Commissioner to a tribunal for backing five police forces' refusal to give us the number of referrals of anti-fracking campaigners to #Prevent's "deradicalisation" process, Channel.

Today, we heard that we won.

On 11 June 2018, London’s Information Rights Tribunal ruled that the police cannot refrain from providing information to the Network for Police Monitoring (Netpol) on how often anti-fracking activists are referred to a secretive "de-radicalisation" programme based on national security reasons. Netpol brought the case to court after the Information Commissioner supported five police forces who rejected the requests for information about "Channel", a deradicalisation programme which part of the UK government's controversial Prevent strategy. Prevent is a referral system for people identified as “vulnerable to being drawn into terrorism”.

Netpol reported that the police tendency to disregard the request for transparency on national security grounds “is a long-standing concern for many campaigners alarmed about the scale of intrusive surveillance on political dissent”. Leaked documents had exposed how "the security services and police have been using Prevent to monitor not just Muslim activism and charitable work, but dissent and "subversive activities" that go well beyond ideologies that “draw people into terrorism” including anti-war, anti-fracking, pro-Palestinian, anti-austerity, animal rights campaigns.

“This document shows how completely subjective the terms ‘domestic extremist’ and ‘extremist symbols’ are: no wonder the police and the government have failed to pin down a legally robust definition.”

“As this guidance illustrates, the vague criteria/requirements of the Prevent programme are predictably turned into an agenda for stigmatising political dissent, perhaps intentionally…”.

The Tribunal’s ruling highlighted the need for more transparency about the way the Prevent strategy and Channel programme operate, as both “can only work if [they have] widespread public understanding and support”.

Calling ALL those opposed to fracking: PLEASE come to Preston New Rd [PR4 3PE] on Monday 4 June, to protest Cuadrilla's injunction & show them that we are NOT going away!! The bigger the turnout, the louder the message!
Plus you'll get to hear @KateRaworth (Doughnut Economics)!! pic.twitter.com/7zf32sL69I

After this weeks Cuadrilla Injunction, the FINAL hope for #Humanrights remains with #INEOSVthePEOPLE in the Court of Appeal or Strasbourg. We need your help now more than ever. Plz share/donate Right to Protest https://t.co/znRqzGzsKo via @CrowdJustice

Reclaim the Power (a direct action network fighting for social, environmental and economic justice) is organising the Break the Chain 2018 campaign which is targetted at the fracking industry and its supporters. The campaign began on 12th June and ended with Block around the Clock, during which a small group of demonstrators blocked the entrance to Cuadrilla's Preston New Road fracking site in Lancashire for 54 hours. The demonstration blocked all truck deliveries to the site during this period.

6.20am: Around 150 people are stood across the gates of Cuadrilla's unwanted fracking site at Preston New Road, Lancashire for the start of #BlockAroundTheClock. Come on down! https://t.co/zJhakdUpAL pic.twitter.com/rReDcYvRBm

“Fracking is a major threat to public health and does not offer meaningful secure jobs like a thriving renewables industry would. Local people have repeatedly rejected it, but are now faced with a double attack: from companies resorting to bullying tactics, and a government now taking further steps to deprive residents of the right to decide whether their community should be fracked

She went on to outline the movement's intention to continue challenging any individual or organisation facilitating the fracking industry in the UK.

“This injunction does not restrict lawful and peaceful protest but is an important deterrence against unlawful protest.”

Netpol says it has evidence of strategic cooperation between the fracking industry and the police who “appear to share the extremely narrow view that protest is only "peaceful" if it registers symbolic opposition but causes zero disruption”. According to Netpol, to build the case Cuadrilla used a previous injunction won by INEOS (a manufucturer of chemicals and oil products) in 2017. Netpol highlights similarities in the injunctions presented: firms gather evidence online about their opponents, including social media activity, to support their claim of an imminent threat. However, the restrictions target “persons unknown”, not named individuals. As the CIVICUS Monitor previously reported, measures like this force “demonstrators who wished to challenge the order to become formal defendants, thus exposing themselves to the risk of fines and imprisonment.”

Called into Lush shop to buy present and express my solidarity. Along with many of the victims of #spycops I am grateful to Lush for supporting the campaign for truth and justice. It’s appalling its staff have been intimidated because Lush stood up for us. Let’s stand up for them pic.twitter.com/Hwhxfq8ade

Victims of Undercover Policing have expressed solidarity with Lush, a manufacturer and retailer of cosmetics, that is under pressure and intimidation from the police due to its support of the #SpyCops campaign to expand the public inquiry on the secret policing of political protest groups and social movements. According to the Centre for Crime and Justice studies, reforms have so far only addressed how undercover policing is carried out, which now places stricter regulations on police officials. These changes however, do not take into account the pressing issues of transparency and accountability.

“When Theresa May launched this public inquiry we all hoped that the truth about this scandal would finally be exposed and that the disgraceful police tactics would be examined. Instead, the public inquiry Chair is making the inquiry more secretive and is granting the police anonymity in secret hearings. It is time the Home Secretary listened to the victims and appointed a diverse panel to hear the full evidence."

In the solidarity with Lush letter, the victims of undercover policing write:

“The cosmetics retailer Lush has used its facilities to help us as victims press for full disclosure and reform so that this never happens again. This is not an attack on police; it serves to help all those in the police service who wish to uphold the highest standards of policing. For this, we thank Lush for its support. We condemn those who have misrepresented Lush and our campaign and especially those who have sought to intimidate Lush staff. #WeStandWithLush”

London’s Metropolitan Police announced that it will not use the controversial facial recognition technology during the Notting Hill Carnival. The technology has been used during the event since 2016. The Carnival takes place during the August bank holiday weekend.

"We are delighted that the Met has seen common sense and will not be targeting Notting Hill Carnival with facial recognition again this year. However, we are troubled by the force's plans to dramatically increase use of facial recognition over the next six months."

The #DataProtectionAct is now law, without the contentious #Leveson and #Section40 amendments. Perhaps momentary, but for now it’s a victory for UK #pressfreedom. https://t.co/JAzKKl6Pq6

Press freedom groups welcomed news that amendments to the Data Protection Bill passed in May, with potentially adverse effects on press freedom would likely not go through. The proposed amendments were similar to Section 40 of the Crime and Courts Act 2013, a development previously reported on the CIVICUS Monitor, where newspapers not registered with the state-backed regulator Impress would have been responsible for the payment of costs on both sides in any privacy disputes.

Nevertheless, the threat of such provisions on the agenda of future bills is not over. Speaking during the European Civic Forum, Reporters without Borders (RSF) UK Bureau Director, Rebecca Vincent, said:

“Press regulation remains an extremely divisive subject in the UK and is dominating the debate when it comes to press freedom. As a result, little attention is being paid to more pressing threats, such as measures being taken in the name of national security that trample press freedom. Section 40-style punitive provisions in any form remain worrying and should be opposed, but the full range of threats to press freedom in the UK must also be addressed”.

According to RSF’s 2018 World Press Freedom Index, the UK “remains one of the worst-ranked Western European countries” and ranks 40th out of 180 countries globally, having dropped two places since 2017.  The country has declined of 10 places in the last eight years. Persisting challenges to freedom of expression include the Espionage Act and the Investigatory Powers Act (previously covered on the CIVICUS Monitor), two laws which threaten the work of investigative journalists and more broadly freedom of expression.

Welcome news that Appleby has settled its #ParadisePapers litigation against @guardian & @BBCNews, but this suit never should have been filed in the first place. This was investigative reporting in the public interest. https://t.co/USapjtka49 #pressfreedom

On a positive note, in May 2018, BBC, the Guardian and Appleby agreed to a settlement in a lawsuit related to the Paradise Papers. In mid-December 2017, the offshore law firm, Appleby, sued the Guardian and the BBC for reporting the leaked documents known as the Paradise Papers that exposed several offshore tax heavens. Appleby asked for the disclosure of the documents at the base of their story and the payment of damages for the reporting of confidential papers acquired through a hack.

According to a joint statement:

“Without compromising their journalistic integrity or ability to continue to do public interest journalism, the Guardian and the BBC have assisted Appleby by explaining which of the company’s documents may have been used to underpin their journalism. This will allow Appleby to initiate meaningful discussions with its clients, colleagues and regulators.”

A spokesman for the Guardian commented:

“The Guardian’s reporting from the Paradise Papers is investigative journalism that has raised important issues in the public interest.”

“We welcome this settlement which preserves our ability to carry out investigative journalism in the public interest.”