As previously reported in the Civicus Monitor, the Cambodian authorities escalated its repression in 2017 by dissolving the main opposition party and arresting its leader Kem Sokha on charges of treason. It also intensified its misuse of the justice system to criminalise human rights and political activists and forced the closure of media outlets.

The situation has deteriorated further in 2018, in the lead up to this years’ elections, with new legal restrictions being proposed.

A draft lese majeste law banning insults of the king as well as constitutional amendments, that could restrict freedom of association and political participation, was forwarded to the National Assembly on 6th February 2018.

The proposed legislative changes were slammed by the ASEAN Parliamentarians for Human Rights (APHR) warning the adjustments would “inflict deep, long-lasting damage to Cambodia’s institutional framework”. Parliamentarians expressed particular concern over proposed changes to the Constitution’s Article 42, which would insert a requirement for political parties to “place the country and nation’s interests first,” as well as to Article 49, which would forbid individuals from “undermining the country’s interest.” The APHR went on to say that the proposal of a lèse majesté law banning insults to the King is “extremely worrying”.

The prosecution and conviction of human rights activists and government critics also persisted.

On 7th January, Cambodian environmental activists, Dem Kundy and Hun Vannak, were sentenced to a year of imprisonment and fines of one million Riel (250 USD). They had been detained since 12th September in Koh Kong province while taking photos of dredging operations along the Cambodian coast carried out by a firm linked to the ruling Cambodian People’s Party. The activists' NGO, Mother Nature, formally disbanded days after the arrests, citing harassment and pressure on staff from Cambodian authorities.

On 18th January, charges were brought against three prominent civil society activists, which many believe to be politically motivated. The three were charged with “breach of trust” for allegedly misappropriating funds raised for slain political activist Kem Ley’s funeral, despite the fact that nobody in Ley’s family filed a complaint. Activist monk Buntenh, independent media advocate and founder of Cambodian Center for Independent Media, Pa Nguon Teang, and labour rights campaigner Moeun Tola have all been frequent critics of the government.

In response to the arrests, civil society organizations issued a statement saying:

"We call for the charges against three of Cambodia’s most prominent civil society leaders – Mr. Pa Nguon Teang, Venerable But Buntenh, and Mr. Moeun Tola – to be immediately dropped. These baseless charges are clearly a form of intimidation and harassment, aimed at further silencing Cambodian civil society and human rights defenders."

On 30th January, three Cambodian forest defenders - Thol Kna, Tern Soknai and Seng Vattana – were killed, allegedly by border security officials, after confronting illegal loggers and confiscating their chainsaws. Cambodian security forces are known to collaborate with illegal loggers who smuggle wood to neighbouring Vietnam. An investigation is reportedly being undertaken into the incident. 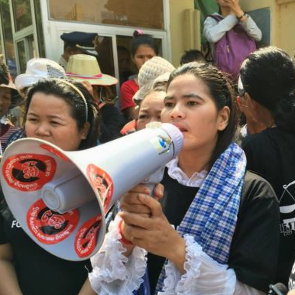 On 7th February 2018, the Supreme Court upheld the conviction and 30 months' prison sentence against prominent land rights defender Tep Vanny (above) for her peaceful participation in a March 2013 protest in front of Prime Minister Hun Sen's house. In December 2017, the Supreme Court had also upheld the conviction of Tep Vanny and two other land rights activists – Kong Chantha and Bou Chhorvy – on charges of insulting and obstructing a public official. The convictions – under Articles 502 and 504 of the Criminal Code – related to a 2011 land protest outside Phnom Penh city hall.

Former opposition party activist, Sam Sokha, was forcibly deported from Thailand on 8th February. She had fled the country after being charged for insulting the ruling Cambodian People’s Party after posting a video in April 2017, of herself throwing a shoe against a billboard bearing photos of Cambodian Prime Minister Hun Sen and National Assembly President Heng Samrin, saying, “These are the men who are destroying our nation.” Human Rights Watch has called for her immediate release and criticised her deportation by Thailand as a violation of international law.

Following the dissolution of the main opposition party, the US State Department issued a statement on 6th December 2017 announcing visa sanctions on individuals "responsible for undermining Cambodian democracy":

"In direct response to the Cambodian government’s series of anti-democratic actions, we announce the Secretary of State will restrict entry into the United States of those individuals involved in undermining democracy in Cambodia. …We call on the Cambodian government to reverse course by reinstating the political opposition, releasing Kem Sokha, and allowing civil society and media to resume their constitutionally protected activities. Such actions could lead to a lifting of these travel restrictions and increase the potential for Cambodia’s 2018 electoral process to regain legitimacy."

On 15th December 2017, the European Parliament passed a resolution to impose visa restrictions on Cambodian officials and freeze their assets due to their ongoing human rights concerns in the country. According to the resolution the human rights situation in Cambodia has "deteriorated, with an increasing number of arrests of political opposition members, human rights activists and civil society representatives being carried out in Cambodia."

The latest Democracy Index from the Economist Intelligence Unit released on 1st February 2018 ranked Cambodia 124th out of 167 countries, sliding 12 places downwards of its 2016 standing. It also dropped Cambodia from a “hybrid regime” to an “authoritarian” one.