The Maldives was thrown into a political and constitutional crisis on Thursday 1st February 2018 when the country's Supreme Court ordered the release and retrial of a group of opposition politicians, including former president Mohamed Nasheed. The court also ordered the reinstatement of 12 lawmakers who had been stripped of their parliamentary seats by President Yameen’s party for defecting last year, saying their removal was unconstitutional. The ruling was met with strong opposition from the government, who refused to release the nine opposition leaders.

Immediately after the ruling was delivered, large crowds gathered outside the main opposition parties' headquarters. According to local civil society groups, within an hour, riot police in shields began forcefully dispersing people gathered near the Maldivian Democratic Party (MDP) Campaign Center and the Jumhooree Party Centre. It is reported that police used tear gas and violence in the process and later entered the MDP party building to remove media officials. The crackdown lasted until the early hours of the morning.

There has since been a heavy presence of police and soldiers on the streets of the capital, Male and on Sunday 4th February, Al Jazeera reported that army had sealed off the parliament and arrested two opposition MPs (Abdulla Sinan and Ilham Ahmed).

President Yameen and his government have deployed the security services in an attempt to maintain their grip on power. Maldivian civil society organisations Voice of Women and Women & Democracy released a joint statement condemning the government's actions and calling on them to respect fundamental freedoms and the rule of law:

On 4th February, Attorney General Mohamed Anil held a press conference (image below) with the Defence chief, General Ahmed Shiyam, and Commissioner of Police Abdulla Nawaz, whose predecessor had been sacked for saying he would apply the court's ruling. The Attorney General stated that the Supreme Court was trying to remove President Yameen and ordered the security forces to resist any move by the Supreme Court to arrest or impeach the president. He argued that any Supreme Court order to arrest the president would be unconstitutional and illegal. 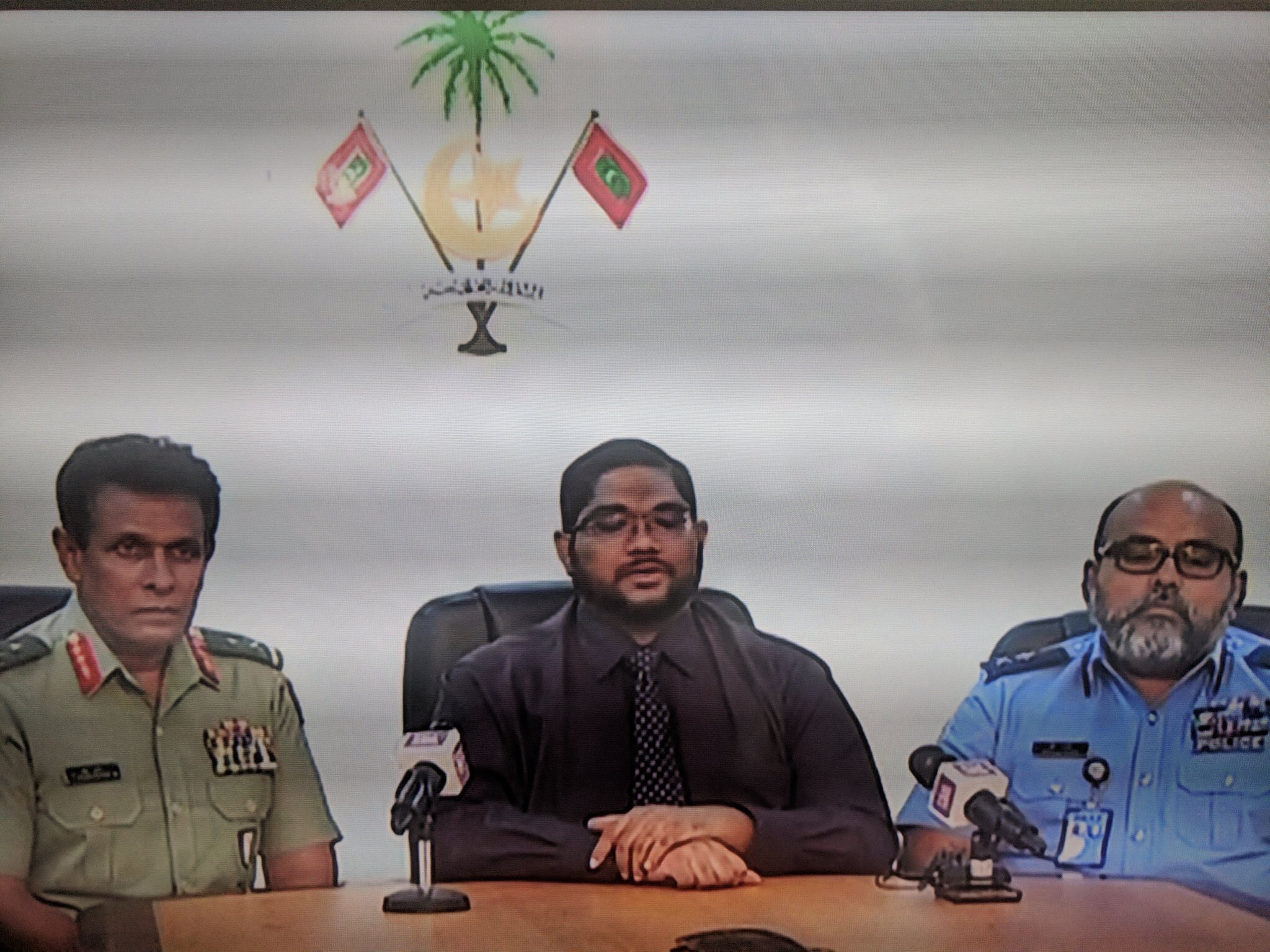 The Supreme Court subsequently issued a press statement stating that there was no legitimate reason which obstructed the relevant authorities from executing the court order to release the politicians and the matter was communicated to the Prosecutor General on 4th February 2018.

Responding to the crisis, Members of Parliament of the Joint Opposition of the Maldives issued a resolution on 5th February expressing concern that the government had refused to abide by the ruling, had cancelled the opening of parliament and had intimidated the Chief Justice, among others. They called on the international community to consider all measures to hold government officials accountable for violations of national and international law.

Resolution by Members of Parliament of the Joint Opposition of the Maldives. pic.twitter.com/JEfpn2DjDf

In recent years, human rights groups have raised concerns about the continued suppression of the political opposition by the administration of President Yameen through the enactment and enforcement of harsh restrictions on free speech and assembly, as well as the harassment of journalists, activists and media outlets.