Teachers strike due to pay freeze from IMF agreement 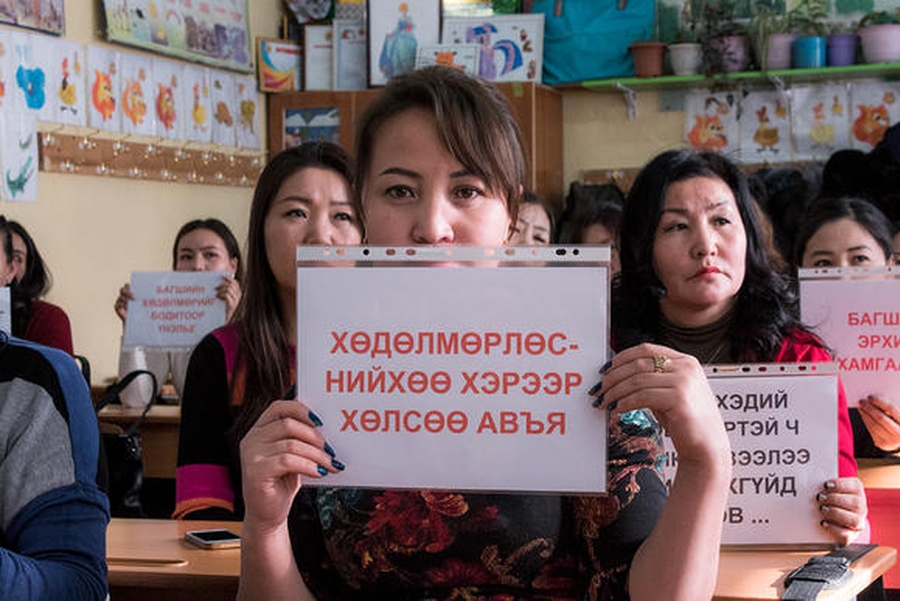 Teachers on strike at a school in Ulaanbaatar: The sign reads "Salary equal to our work." (Photo by Ochir Khaidui)

On 13th November 2017 Mongolian teachers began an indefinite strike across the nation as part of an ongoing protest to demand higher pay that began in August 2017. Teachers in a total of 177 secondary schools, 217 kindergartens and 11 scientific organisations vowed to continue the strike until the government agreed to raise their wages. Prior to this, teachers had already staged two single-day strikes this school year, in September and October 2017.

However, the government of Prime Minister Khurelsukh Ukhnaa has refused to meet their demands stating that "resources are low and that the government was not obliged to raise public workers' salaries or increase staff according to the agreement with the International Monetary Fund (IMF)." Mongolia had secured a USD $5.5 billion loan package from the IMF and its partners in February 2017 to cover a budget deficit brought on by the economic crises. One of the conditions of the aid package was an agreement not to raise salaries for civil servants and pensions until 2020.

On 2nd November, Global International, a non-profit group working on freedom of expression, information, and media in Mongolia, held a forum in cooperation with IFEX entitled “#NoImpunity.” The world-wide #NoImpunity campaign is designed to bring attention to the fact that the majority of cases of harassment, torture and killings of citizens, journalists, artists, and activists go unpunished. Global International said in the forum that while only 40 cases of violations against journalists were reported in Mongolia in 2017 that many cases were still hidden and that threats and pressure from authorities often lead to self-censorship.

In September 2017 the United Nations Special Rapporteur on human rights and the environment visited Mongolia and was troubled to hear about threats and violence against environmental rights defenders. He called for the reopening of an investigation into the death of Lkhagvasumberel (Sumbe) Tumursukh, a conservation ranger who worked to protect area laws at Tost Uul, a mountain range in the Altai Mountains in the Gobi Desert. He was killed in 2015 and his death was ruled by the police as suicide-by-drowning, despite the fact that over the preceding two years Sumbe had been attacked on at least three separate occasions. The Special Rapporteur also called for the enactment of a law to protect environmentalists and other human rights defenders.